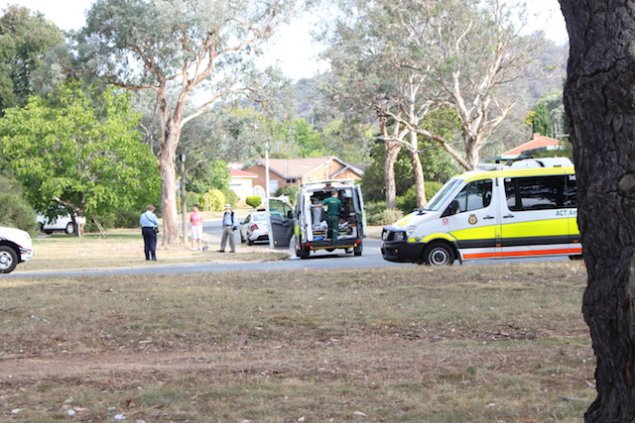 ACT Policing has charged a 30-year-old NSW man with assault following an incident in Hackett on Saturday afternoon (March 7) in which a 30-year-old man suffered serious head injuries.

Around 5pm, police responded to reports of a disturbance in Hackett. Upon attending they found a man lying unconscious on the ground with head injuries.

Witness reports suggest the man was hit over the head with a guitar by the alleged offender.

ACT Ambulance Service attended and treated the victim before transporting him to The Canberra Hospital where he remains in a serious condition.

The alleged offender, who was known to the victim, was taken into custody by police and conveyed to the ACT Watch House.

The 30-year-old NSW man has been charged with intentionally inflicting grievous bodily harm and possession of a weapon with intent. He will appear in the ACT Magistrates Court tomorrow (Monday, March 9).

Police are urging anyone who may have witnessed the incident or have any information that could assist police to contact Crime Stoppers on 1800 333 000, or via https://act.crimestoppers.com.au. Information can be provided anonymously. We remind people they should not report crime information via our Facebook and Twitter pages.

Chris Cross - 22 minutes ago
Exactly right! The whole premise of this story is misleading and a terribly written opinion piece. No one is proposing, plann... View
Mark Scarborough - 4 hours ago
As long as it is cheaper than flying. View
Justin Watson - 4 hours ago
Yeah it wouldn't be too expensive to get rail travel down to 2 1/2 hrs between Canberra and Sydney. A 1 hr fast train would b... View
Community 139

Amanda East - 41 minutes ago
Noooo.... View
Bec French - 2 hours ago
GO cut something else down!!!! leave them be! View
Julie Macklin - 2 hours ago
It would be interesting to know how many accidents have happened here and over how many years and when; the actual figures. A... View
Opinion 15

Jan Sandra Cornish - 1 hour ago
We could raise their wages and put more money into training them. Rostering changes could work too. Police have different wor... View
Louise Flood - 4 hours ago
A nice idea but how will our esssential workers do this? Nurses, fireys etc. View
Kurt Neist - 6 hours ago
I wash dishes, order supplies and do deliveries. Can’t do any if it from home. At least the pay is rubbish...... View
News 4

Elroy Jones - 5 hours ago
Completely agree View
duc nguyen - 6 hours ago
No one comes to Canberra and thinks the current West Basin is the place to be. Even though it is at the heart of the Nation's... View
Neil Chandler - 9 hours ago
I would have thought that whatever "heritage" the area had, both european and indigenous would have been pretty much devastat... View
Food & Wine 5

Rose Mary - 10 hours ago
David Blanchfield put it on the menu! View
News 4

Greg Garth - 13 hours ago
Gabriel Spacca Or a mixture of smoke and steam. View
Gabriel Spacca - 16 hours ago
If you pour water on fire it’s likely to cause more smoke not less. View
Sport 31

Nikos Manikas - 17 hours ago
Dianne Latimer if Brisbane get a 2nd team then all Ch9 will do is alternate between the 2 Brisbane teams. just like now they... View
Food & Wine 128

Mystery surrounds a loud bang heard early this morning in Belconnen and Gungahlin but it's not the first to be...
Community 139

The $200 million Monaro Highway upgrade is a step closer with the release of concept designs for a southbound flyover at the...
Best of Canberra 114

@The_RiotACT @The_RiotACT
The ACT Government has brought forward almost $10 million worth of screwdriver-ready projects to help mitigate the COVID-19 downturn https://t.co/poe4TyaRqM (2 hours ago)

@The_RiotACT @The_RiotACT
Resources developed for virtual excursions to Old Parliament House have been put to good use during COVID-19 restrictions but will also help remotely located students from across the nation to visit the Museum of Australia Democracy https://t.co/grpAeze1pX (3 hours ago)

@The_RiotACT @The_RiotACT
Founders of Fortem Australia aim to support law enforcement & emergency service workers in the way that Soldier On has done for defence personnel https://t.co/qZBYhgppeh (4 hours ago)