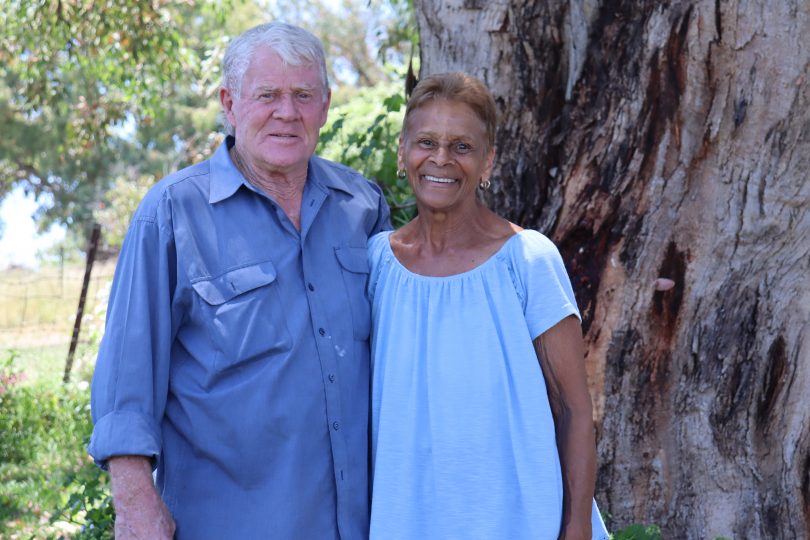 Dorothy and Bruce ‘Bluey’ Hubbard were dealt a bad hand in life, but their marriage – at the ages of 14 and 17, respectively – has stood the test of time.

Today, they are 62 years strong and living happily in Bigga, two hours north of Canberra in regional NSW. They have four children – Lawrence, Jesse, Michelle and Daniel – 11 grandchildren and 12 great-grandchildren.

Marrying young was a gamble, but Dorothy and Bluey knew they were better together.

Bluey was just six months old when his father died on the Kokoda Track in Papua New Guinea during World War II. His mother had her hands full with seven children so Bluey, the youngest, was sent into care.

He spent his childhood between a boys’ home and foster care. No-one came to visit and Bluey had to question if the family he returned to at age 16 was even his.

A year later, he met 13-year-old Dorothy and was accepted into her family – although things weren’t easy there either.

Dorothy’s mum was an alcoholic and the teenager was left to rear her three younger sisters and brothers.

In fact, she stood on the road with one on her hip and the other holding her hand as they watched their first home burn down. The terrace house in Redfern, Sydney – shared by Dorothy’s family and two others – had been set alight by her uncle siphoning petrol in front of an open fire.

Her family eventually moved into emergency accommodation in Sydney’s Hargrave Park, where the couple met. Huts had been built there after World War II to support a booming population during Sydney’s housing shortage.

Bluey’s friend lived in the hut behind Dorothy’s and it wasn’t long before the pair crossed paths.

However, neither family had educated them about sex, and contraception wasn’t widely available back then. Dorothy gave birth to their first child before the couple was married.

Despite their reservations, Bluey and Dorothy’s mothers consented to their marriage at the local courthouse on 17 May, 1958.

However, it almost didn’t go ahead when Bluey was arrested because of his age. Dorothy’s uncle bailed him out and swore to the police that they would be married shortly.

One can only hope the rest is a love story full of happiness and treasured memories, but Dorothy says the first 15 years of their marriage “were hell”.

People were against their union, but not because of their age. Racism has followed Dorothy – who is part African-American and part Indian – her whole life and it has contributed greatly to her lifelong battle with depression.

“I remember I would get on the bus with the kids and people would move to the other side,” she says. “I’d think, ‘Here we go again.’”

They also had no money and all five of their children were born before Dorothy was 19 years of age. Their second child, a girl, lived for just 22 hours.

“People asked how I did it all by that age, but I had done it by the age of 10 with my own sisters and brothers,” says Dorothy. “And I absolutely loved being a mum. We survived – we were very careful with money and still are because we don’t know any other way to live.”

Dorothy made meals with whatever she had and Bluey took work wherever he could – installing television aerials, working at Homebush Abattoir and chasing chooks at Ingham’s Chicken. Dorothy also pushed to work later on – despite it not being the done thing back then – making showbags for the Sydney Royal Easter Show. However, the couple didn’t get out of debt until 1976.

After their kids had left home, they moved to the northern NSW town of Tenterfield, near the Queensland border, a place they had discovered on their travels. Life was good for a while until the racism returned, this time from neighbours.

So they packed their bags again, still searching for a better life, and found Bigga – a sleepy little place where everyone is welcome that is just three hours from their children in Sydney.

Memories of childhood trauma, racism, poverty and the loss of a child still linger, but Dorothy and Bluey believe you’ve got to talk problems through.

Offering forgiveness and compromise is key to a long-term relationship, says Dorothy.

“It wasn’t until I started going to work and I gained confidence that I spoke to Bluey about the things I didn’t like in our marriage,” she says. “That’s when I realised that if you don’t talk it out, you only hold it in and it makes you angry towards a person.

“Then when they do something you don’t like, you have to be able to forgive and not keep bringing it up, otherwise it will destroy your relationship.”

MERC600 - 2 hours ago
""NSW residents are able to come into the ACT for essential work, school and study, medical and health needs, and compassiona... View
Acton - 3 hours ago
If you are travelling to the ACT from anywhere in NSW other than the Greater Sydney, Central Coast, Blue Mountains, Wollongon... View
harcm - 4 hours ago
If the information is confusing for you then please stay away. Unless you are absolutely sure you are allowed out of your hou... View
Courts & Crime 3

nobody - 2 hours ago
We need a huge improvement in the way the AMC is operated, what is your suggestion? View
News 32

Guy Noble - 3 hours ago
Gladys will have all of Australia in lockdown soon. WTF are we letting them in View
Matt Howarth - 3 hours ago
You’ve got to be kidding, don’t come. View
Allyson Wales - 4 hours ago
Would it be possible to attend remotely? Half our country are working from home so surely our politicians can too View
Breaking 2

Stephen Saunders - 4 hours ago
Thanks for the update. Meanwhile, from NSW, "Sorry we aggravated you with all our posturing and premature victory laps, but c... View
Property 1

goggles13 - 5 hours ago
What does the WVCC think should go in place of Borrowdale House if this doesn't proceed? Something needs to happen to that pa... View
News 2

Daniel Duncan - 9 hours ago
As long as the public has a chance to book it for whatever they want to do with it. (Its taxpayers money after all) View
Property 2

Sam Oak - 11 hours ago
Demolish the glassworks, they are the biggest eyesore in Kingston. You could fit about 50 luxury apartments on that block of... View
concerned ratepayer - 15 hours ago
Whatever happened to the multi-tourist award winning Bus Depot Markets? This developer doesn't care. Insufficient car space f... View
Opinion 48

planet42 - 15 hours ago
Have lived in Canberra for 50 years, always loved it, never embarrassed. Nature, coast and mountains are close, driving is ea... View
Helen Prior - 15 hours ago
Lived Canberra 40years Left 2003 Now live Central Coast.Biggest mistake ever.I want to come home but I have to win powerball.... View
show more show less
*Results are based on activity within last 7 days

Snow is expected to again fall on the Brindabellas and the ranges on Friday (23 July) and over the weekend,...
Opinion 48

It's rare to find a restaurant or cafe where you can order a meal and get change from a $10...
Breaking 5

@The_RiotACT @The_RiotACT
Two Canberra Hospital Masterplan options have been released. Check out the details so you can have your say https://t.co/VUXhKpvw3T (1 hour ago)

@The_RiotACT @The_RiotACT
This quaint circa-1900 property offers almost 80 acres of rolling pastures and grazing land - perfect if you want to try the #rural lifestyle https://t.co/LYSL27itoY (4 hours ago)