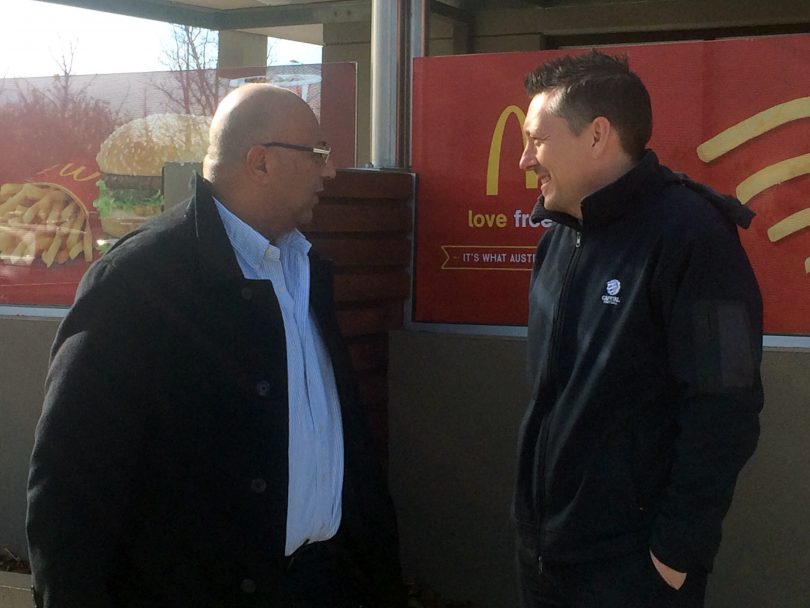 McDonald’s ACT has become the naming rights partner of the largest youth football tournament in the southern hemisphere, the Kanga Cup, as football participation numbers continue to rise in the ACT.

The partnership between McDonald’s ACT and Kanga Cup will span the next three years, providing an opportunity for the youth tournament to grow it’s national and international profile while collaborating with the local Canberra community.

Last year, the Kanga Cup saw 380 teams descend on playing fields across Canberra and contribute a staggering $5.2 million to the Canberra economy due to over 42,000 visitors across the ACT.

Capital Football CEO Phil Brown said that the support of McDonald’s ACT will only serve to improve the event this year and their passion and support for local grassroots sport only serves to make the future even brighter.

“The Kanga Cup generates an enormous economic uplift for the ACT business community, and we are grateful that McDonald’s ACT has chosen to partner with the tournament,” Mr Brown said.

“Their support of the Kanga Cup demonstrates a commitment to give back to the local community by partnering with grassroots sport.

“From its humble beginnings in 1991, with just 35 teams, the Kanga Cup has grown to be the largest youth football tournament in the southern hemisphere,” Mr Brown said.

“This July, we welcome back teams from across Australia who will be joined by teams from South Korea, New Zealand, and for the very first time Ghana and Singapore, which will be a great addition to the tournament this year.

“From 35 teams up to 360, we would love to see it go past 400 and the more support and partnerships with big brands, the more chance we have of growing the competition.”

McDonald’s ACT licensee Hani Sidaros said he is looking forward to being a part of the tournament and using his brand to help grow and improve the grassroots tournament.

“We’re really proud to be a part of the local Canberra community and we do everything we can to support them,” Mr Sidaros said.

“We’re delighted to be able to play an active role in supporting grassroots football through the Kanga Cup and, in doing so, encourage more kids to lead an active lifestyle.

“We’re excited to see the tournament come to life next month and will be cheering on the teams the whole way.”

Mr Brown said Capital Football had seen participation numbers grow, coinciding with the World Cup this year. The CEO said ACT’s football governing body will continue to increase access to fields and the number of coaches and referees available to facilitate the growing numbers.

“This year we had an increase in juniors and seniors across both males and females, and we would hope to see that the success of both Socceroos and Matildas in national and international competitions leads to further growth in participation in the years to come,” he said.

“We are continuing to engage with the ACT Government about access to fields. There are other opportunities, with schools and other private venues and we will continue to explore those opportunities as much as we can.”

Lyn Kelly - 1 hour ago
Hi Bryan, I have 501 and may consider selling it if you are interested. View
News 20

bigred - 2 hours ago
I suspect there are same internal software problems in their billing systems. In my case , last bill was OK but also a wake u... View
JS9 - 5 hours ago
While there is no doubt that the contracts are unfavourably placed at the moment, its not '3 times the current electricity pr... View
bj_ACT - 6 hours ago
Spot on Chewy. As has been pointed out by a few people over the last year. The ACT government has signed up fixed price 20 ye... View
News 7

Johnny Grey - 2 hours ago
He would say that, wouldn't he. Police always want to have their idea of control of drug use.... View
T - 3 hours ago
It would be great if they could legalise medical marijuana for people as an alternative to pain management medications and to... View
poorman - 3 hours ago
Please read https://www.forbes.com/sites/mikeadams/2018/03/28/california-officials-say-marijuana-legalization-causing-more-vi... View
Community 76

Futureproof - 4 hours ago
It's not just Hyundai EVs, it's Hyundai in general. There have been worldwide recalls for vehicle fires on Hyundai ICE vehicl... View
nobody - 6 hours ago
Hyundai have recalled about 1,000 electric vehicles in Australia to replace the batteries, and about 82,000 worldwide. LG hav... View
Opinion 78

Once you walk through the predator-proof fence, it's like going back a century in time. Sure, you can hear the...
News 44

WARNING: This story may distress some readers. 'Pindar' the peacock is the latest to be struck by a car on...
Best of Canberra 50

This month, your McCafe coffee could change a young person’s life

@the_riotact @The_RiotACT
Thirty Canberra corporate elites are about to take on the 145 km Canberra #Centenary Trail. Who will complete the #challenge? Over five days, follow their adventures as they tackle the 'Canberra Camino' and raise money for @Menslink https://t.co/ay3SWKaL4Y (25 minutes ago)

@the_riotact @The_RiotACT
The @WNBL #draw has been released and, as Tim Gavel writes, there's a lot for @UCCapitals #fans to get excited about https://t.co/EV8vf94L2J (2 hours ago)