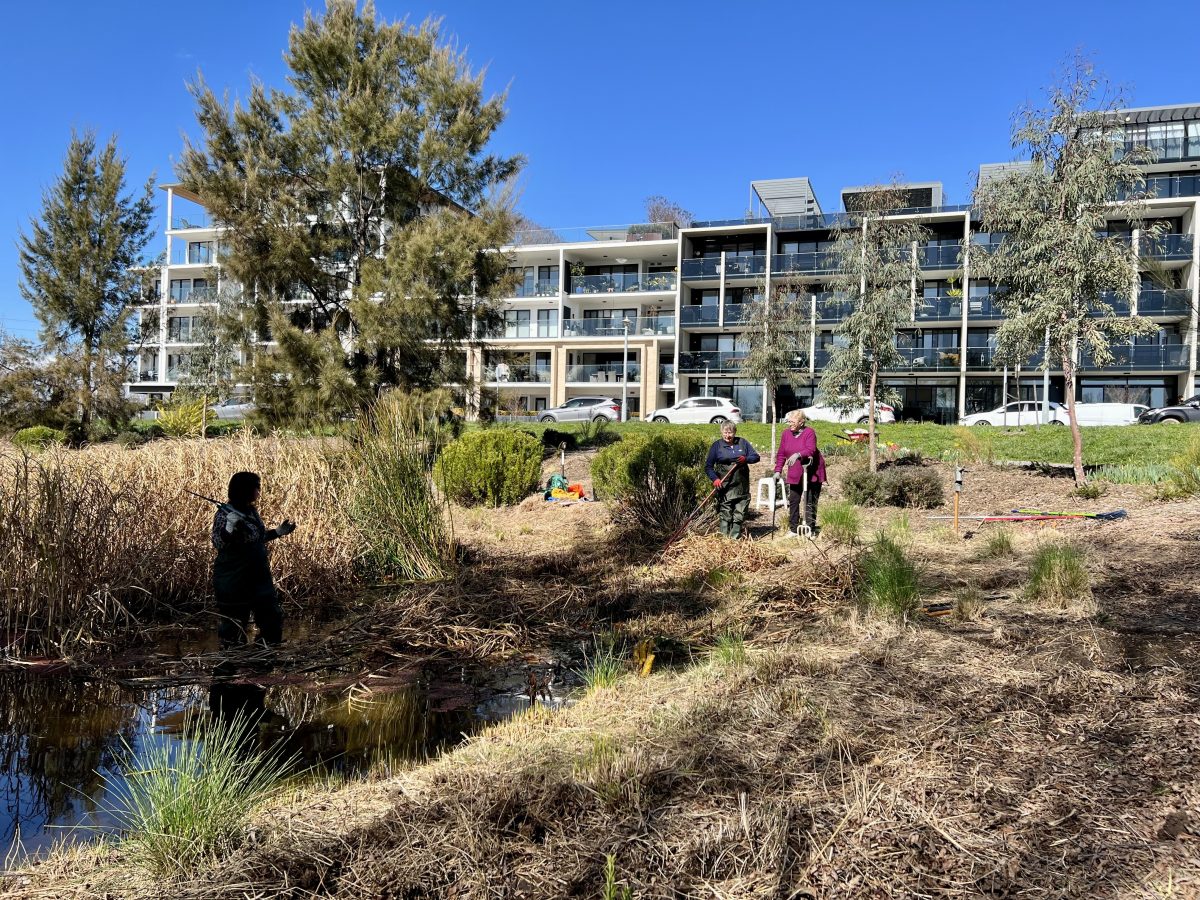 The 80-year-old resident of Kingston Foreshore had spent the past seven years looking at, walking past, and just generally being confronted by a mess on the shoreline.

Jerrabomberra Creek feeds into the East Basin of Lake Burley Griffin at the Kingston Foreshore, but right before it does, it goes past a small pond called ‘Honeysett Pond’.

“It was a very pleasant place to walk past,” Sue says.

“Until the temporary construction fencing went up for the Sapphire apartment complex. Then it just became a mess – full of weeds, pests, and metal stakes. We couldn’t even see the pond anymore.”

Sue worked as a landscape architect until she retired, and even owned her own local building company called Ambience Homes.

“Landscape design was one of the things I did for decades, so I’m very familiar with it,” she says. 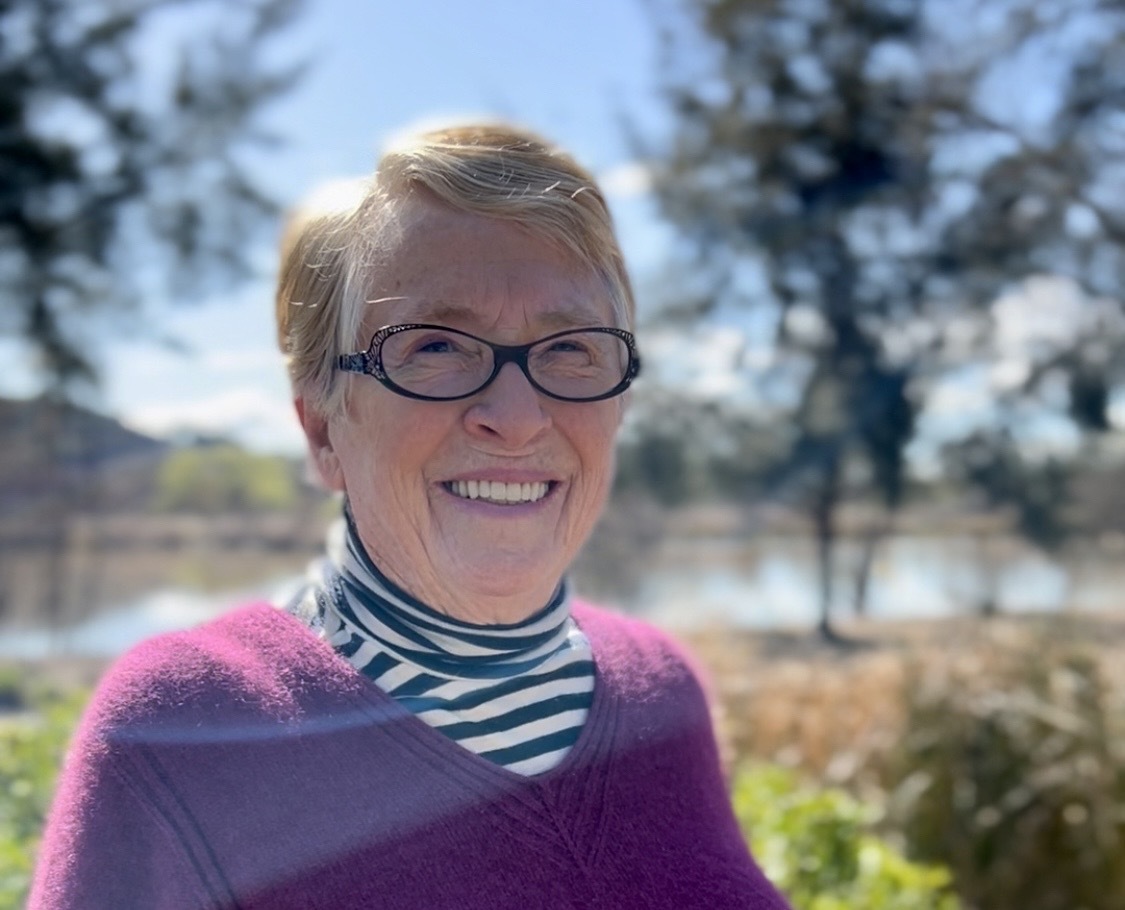 Once the construction teams moved out, Sue wasn’t sold on the job they’d left behind.

“It had been landscaped, but it was still a mess,” she says.

She and a group of equally miffed volunteers dubbed themselves ‘Friends of Honeysett Pond’ and devised a plan.

They would clear the land around the pond and hire earth-moving equipment to form four layered garden beds, replete with native plants and mulch. Along the path, there would be a spring-themed garden, decked out with more than 700 jonquils and daffodils worthy of a Floriade display.

All they needed was permission, gardening tools, and money. So, with the help of the Molonglo Conservation Group, they approached the ACT Government.

“We only received half of our $10,000 grant application but they approved the plan,” Sue says.

“We answer to someone in the government who answers all our questions and provides us with all the gardening equipment.”

The 15-strong group of volunteers have been working on the site since 26 May, but only in threes so they don’t trip the legislation that requires them to have a first-aid officer on site. So far, they’ve cleared the land, using the grant money to buy soil and plants, although Sue has also had to dig into her own pockets to the tune of about $2000 for some of the fauna.

They’ve now launched a GoFundMe fundraiser to help pay for the next step. 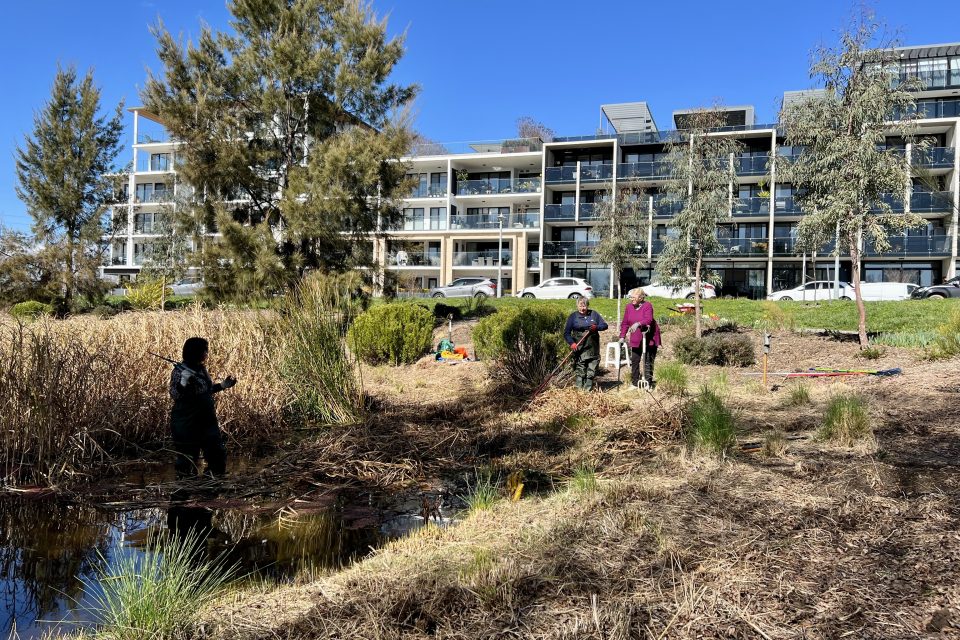 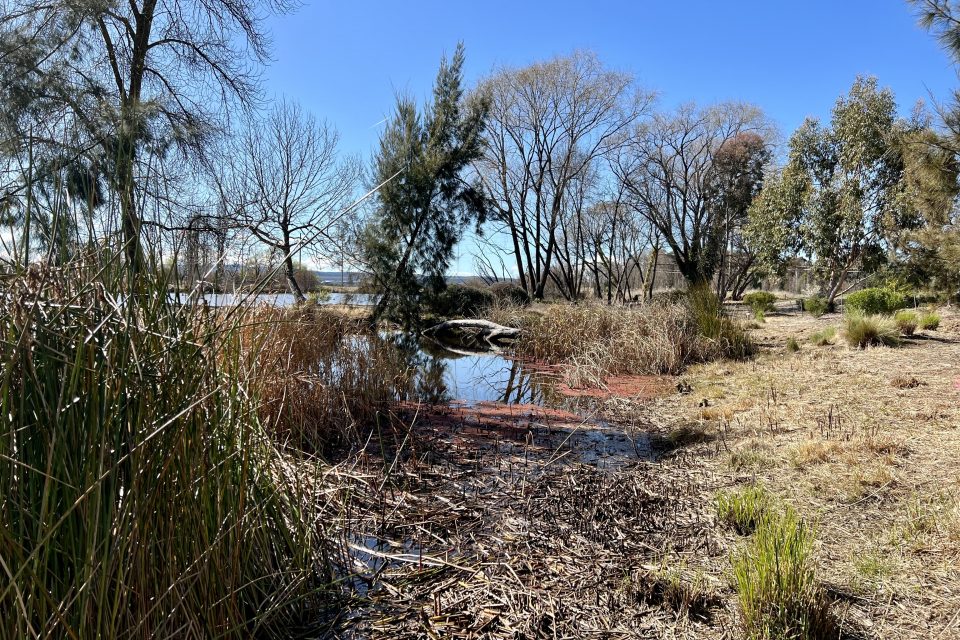 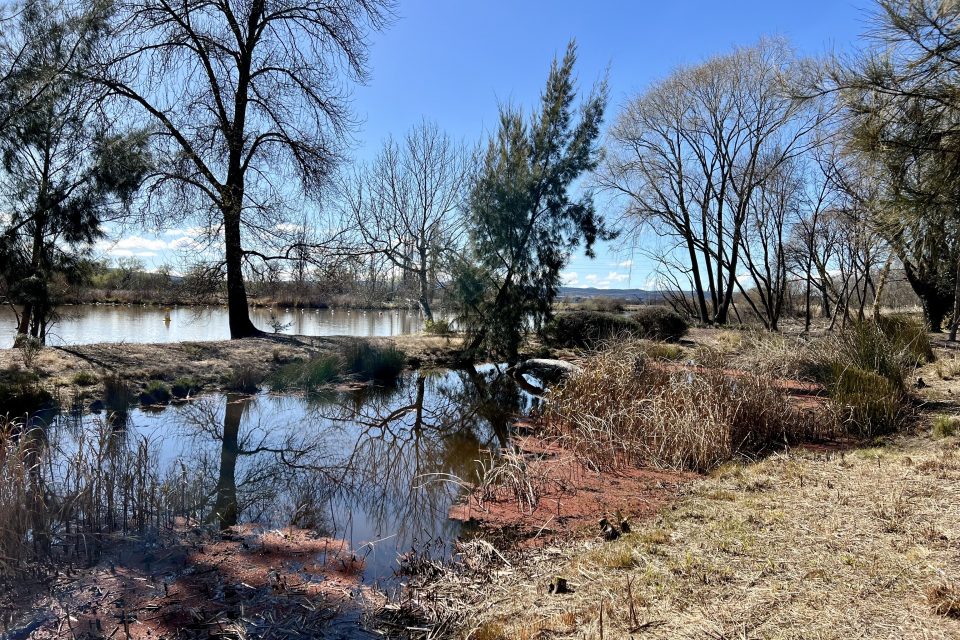 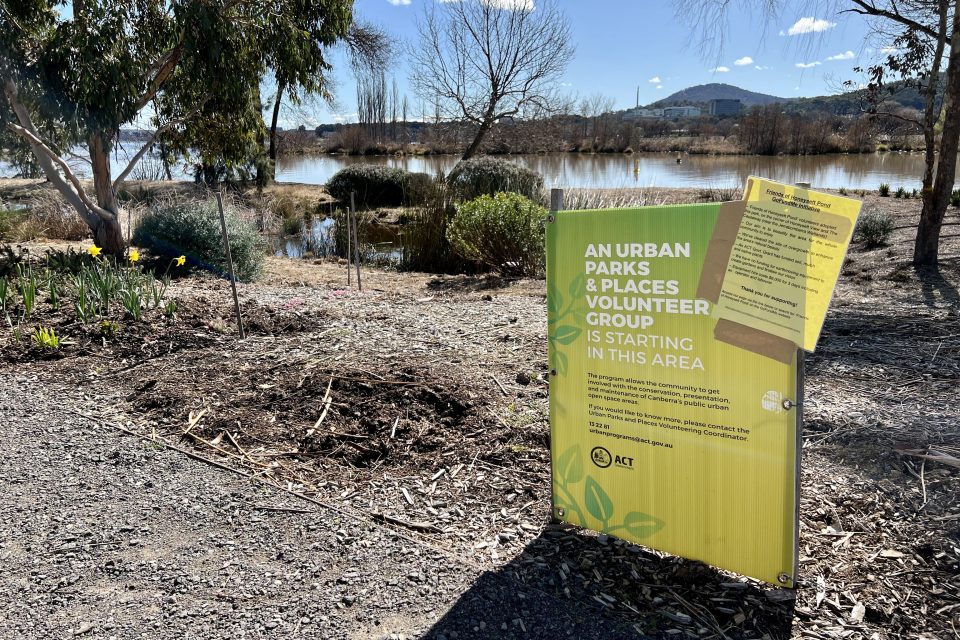 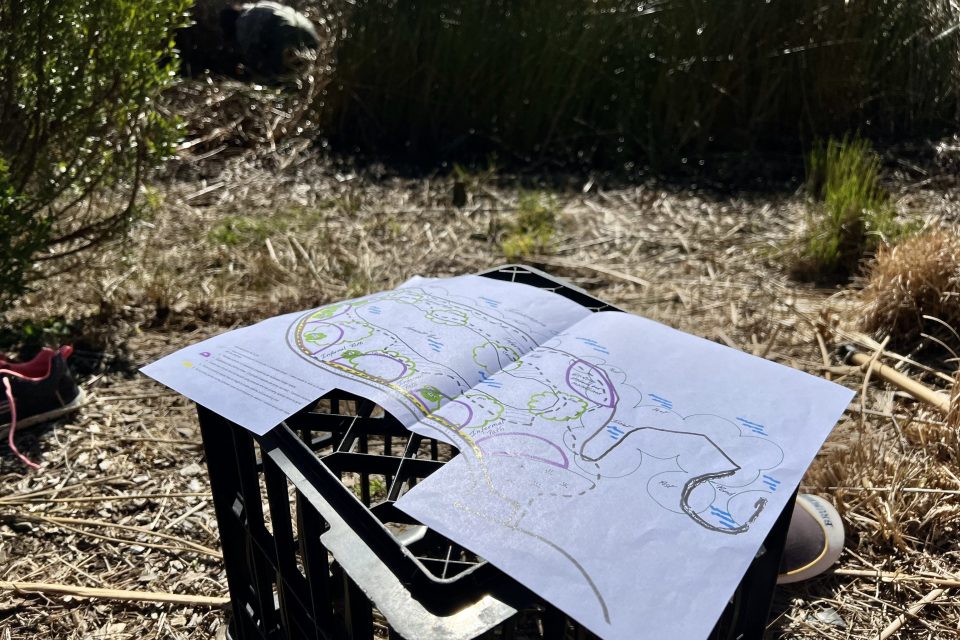 “The area is quite clear now so we can see how the land lies, and the flowers are slowly coming out at the moment,” Sue says.

“But the earthmoving equipment costs $6000 for the three days and they came on Monday (29 August) to finalise our vision.”

The first stage of the project should be done by the end of the month, just in time for the middle of spring. As for future work, Sue says they are still trying to convince the ACT Government to add a rubbish bin and public toilet block.

“Many dogs are walked in the area and many people picnic,” she says.

READ ALSO Is it time the ACT’s community councils did more? Gungahlin president has an idea

“And because there are no public toilets at all on this side of the Foreshore, people are urinating publicly in our park and it is quite unbecoming for the overlooking apartment residents to view. Cars also stop here for the express purpose of the drivers to urinate.”

The locals couldn’t be happier with the work, and are a big part of why the fundraiser has already attracted more than $2170 in donations.

“Whenever we’re working near the path, they come and speak to us. They’re delighted.”

Well done to Sue and her friends, Maria Quadraccia!

The group also removed advanced gum trees, to the disappointment of many, presumably because it interfered with their view

There needs to be better community consultation on this – not everyone wants to see 700 daffodils in a very natural and special wildlife area.

Their doing a fabulous job too 🤗

Nic Welbourn the apple doesn’t fall far from the tree.

It isn’t “fauna” – it’s “flora” – fauna means animals, wildlife. Putting toilets and rubbish bins in there isn’t the answer. Rubbish bins and toilets easily become abused, neglected and a health hazard. I’d like to see better community consultation about this. The numbers of dogs in the area is extraordinary and people aren’t keeping to the dogs on leash rules which applies to any areas adjacent to the lake.

Well done and thank you 😊

Thank you Sue for your vision, expertise and determination to beautify Honeysett Pond from a swamp into a beautiful garden 🪴
It looks amazing 🤩

I guess with dense foliage she won’t see the odd public urination!

Greatest achievement to delight the locals with more beauty!

Who developed Sapphire? They need some public pressure shout outs to fund the rest of this plan. It’s only fair. Also, people need to stop pissing in public its gross there are plenty of apps that can show the nearest public bathrooms.

Should’ve forced the developers who messed it up to pay rather than using a taxpayer funded grant.

Please explain.
Just exactly what does the age of Ms Welbourn have to do with the story about “prettying up” the Kingston foreshore ?

As a society we infantilise the elderly.

If you’re responding to my query – please do elaborate on your two exclamation marks,