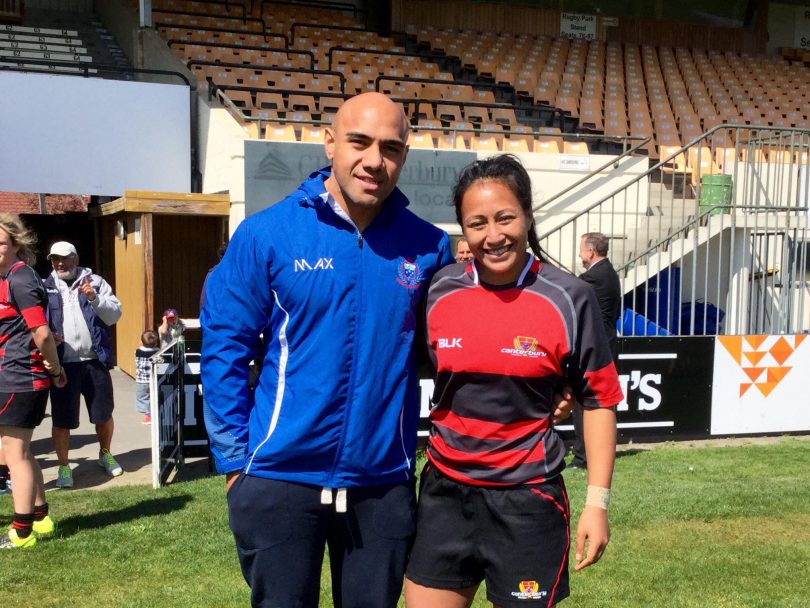 Husband and wife Tevita Siulangapo and Irene MacArthur will coach the Easts women side. Photos: Supplied

Easts rugby club will field a women’s team in the local competition next season for the first time in 13 long years with the help of a husband and wife passionate about local rugby union.

An Easts women’s team will return to the Canberra club competition for the first time since 2006 on the back of a female participation boost in the nation’s capital. In its 81st year, Easts, the oldest standalone club in Canberra, are rebuilding after some lean years and has now set their sights on female expansion.

Taking on the responsibility of 15 rugby players comes at a serendipitous time for the couple, who are also adjusting to life as first-time parents. But balancing a new-born while coaching and playing on game day isn’t daunting for the passionate duo.

“It sounds cheesy, but our Easts rugby community is more like an extension of our family,” Irene said. “There are so many mamas, nanas and aunties on the sideline that they practically run a day care at every home game. Adapting to life as parents and coaching at the same time is something new, but it is more exciting than daunting.”

“As long as the team is committed, growing, learning and being better than before I’m sure we as new parents will manage,” Tevita interjected. “Don’t get me wrong, there will be challenging times like most families, but that’s what makes the journey so exciting.”

The club has recently set up an Easts Academy, which is led by new, up-and-coming coaches who have a vision for player development. With the recent resurgence in the club led by a new enthusiastic management as well as brand new sponsors Capital Easy Finance for the women’s side, Tevita said it is important for the club that female players are represented in the rugby community, advocating diversity and gender equality in the sport. 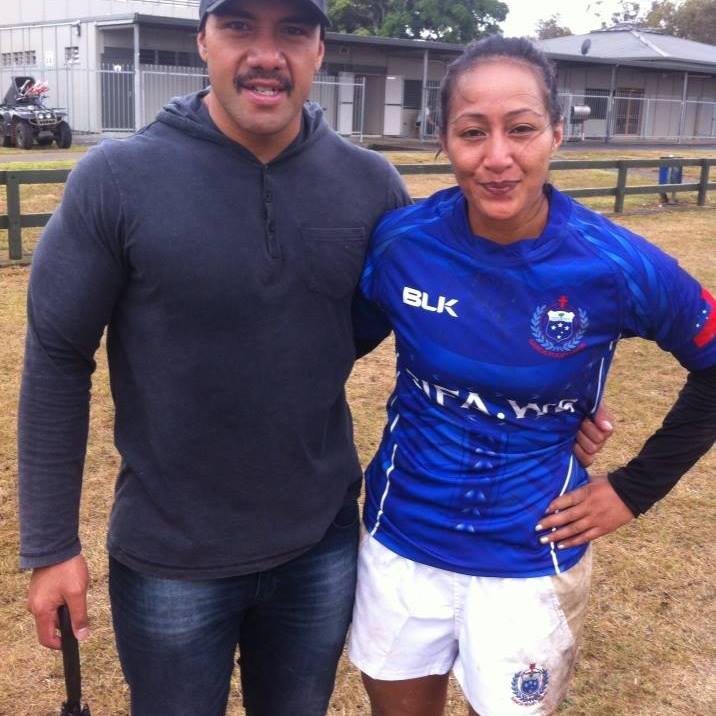 “We are both individually ambitious in our coaching and playing ability and with our experience and enthusiasm we can both bring a lot to the women’s competition,” Tevita shared with The RiotACT. “With Easts providing this opportunity, it ensures that young girls like my daughter can be confident that there is not only a future in rugby but they are equally supported as a player or coach.”

The husband and wife are looking forward to taking up the coaching reigns as a team with the simple ethos ‘in order to lead you must be willing to serve’.

“Anything to do with rugby we genuinely get excited about, maybe its the Kiwi in us but all we want is to play good footy and being able to help players express themselves. Our purpose is all about people and building a community,” Irene said.

Irene will put on many hats when it comes to gameday – as a player, coach, orange cutter, lolly bag holder, mum, rugby recruiter and utility forward or back. Her husband says she is more than capable of balancing her many roles.

“In women’s rugby you have to be prepared to wear a lot of different hats, and women are experts at multitasking, especially in the women’s game as there hasn’t been much support in previous years,” Tevita said. “But thanks to Easts and hopefully with our involvement, we are seeing a shift in attitude towards women in this sport.”

“Yes, it will be time-consuming, tiresome, and testing our relationship at times, but it will also be a hell of a lot of fun with a bunch of our mates,” Irene said with a smile on her face. “Besides its good character-building and that’s what grassroots rugby is all about, everyone mucking in and contributing for the greater good.”

The Easts women side has started training and will play their first game in 13 years when they play at the Queanbeyan sevens tournament on October 13.

Capital Retro - 6 minutes ago
I recently discovered some old papers belonging to my late father. Among them was an "Identity Card" Form C.R.3 which was iss... View
Hans Dimpel - 3 hours ago
Tod Davis which rules and who is speaking them? Are you sure you aren't being influenced by rightwing conspiracy pages with a... View
Hans Dimpel - 3 hours ago
a world full of rainbows and unicorns would be good. sounds nice.... View
Community 9

Phil Tarrant - 9 minutes ago
I remember similar ones from when I was a kid in the seventies, they were sometimes out in paddocks and I saw one that was br... View
bikhet - 55 minutes ago
This seems to be your thing. Never knew the pluviometers were there. Is their output available on the web somewhere? I'm a bi... View
brendan eyers - 3 hours ago
Cool to know what the cubes are, though I've never noticed one. Worth a mention that there are a hundred or so pluviometers a... View
News 124

simm - 29 minutes ago
PLANNING the main entrance on Canberra Avenue is a sensible and practical choice . Franklin street Cafe/Retail strip already... View
abdul mutawe - 38 minutes ago
Having performed building works for Mrs Liangis over past decades, I have to say she is very astute, capable and fair. And sh... View
News 124

Lyn Kemp - 54 minutes ago
Goodbye Zed, hopefully. You've done absolutely NOTHING for the ACT 😖😖 View
Capital Retro - 4 hours ago
"Climate change, gender equity, citizenship, refugee policy, economic and cultural renewal, and a First Nations Voice to Parl... View
Shane Carter - 5 hours ago
Who-da-thunk-it, the man who’s voted against the ACT having self governance. His seat under threat from the ACT calling him... View
News 2

MERC600 - 1 hour ago
Yep , full marks to the Raven. What I would like to know is what would you pay for a coffee to be delivered by this drone mob... View
Capital Retro - 2 hours ago
The next step is to equip the ravens with lasers. Death to all drones!... View
News 2

chewy14 - 2 hours ago
"A responsible and competent government would" Well there's your first problem. They haven't been forthcoming with robust bus... View
michael quirk - 3 hours ago
The government has yet to provide evidence to justify the light rail extension, the viability of which is tenuous given incre... View
Community 2

Neil Chandler - 4 hours ago
Anthony Willing but i have concerns about how it would work in an evacuation where the lifts can't be used by people with mob... View
show more show less
*Results are based on activity within last 7 days