Meet the woman who is going to spruce up the CBD 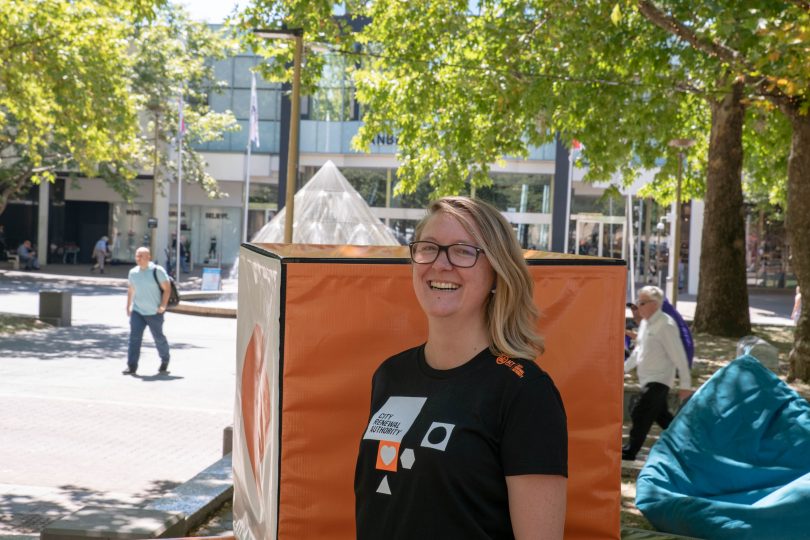 Civic and Braddon may come alive for specific events but day to day there is so much more that could be done to make it a brighter and livelier place to be, according to the woman charged with leading the makeover of Canberra’s central business district.

The ACT’s new City Place Manager, Lavanna Neal from creative consultancy Dionysus, will be working with the City Renewal Authority and city businesses to bring together an entertainment program for the CBD to attract more people to the area, as well as leading a new maintenance team to help make Civic and Braddon cleaner and greener.

Ms Neal, who came to Canberra in 2012 as general manager of the Palace Electric Cinema at New Acton, was also place manager at the ANU’s pop-up village.

She sees her business and people management background as lending a different bent to place-making.

“I probably understand first hand some of the concerns that the business owners and managers might have, and combining that with the people that I work with at Dionysus and putting all that together with the people at the CRA, makes it a more holistic way of looking at things,” she said.

Without identifying certain areas, Ms Neal said sprucing up the CBD would make it a warmer and happier environment for businesses, visitors and the growing number of people who live there.

She said the improvements had already started with picnic tables and umbrellas in Garema Place, and work to make Canberra’s potential-laden laneways more usable.

A big fan of Melbourne’s laneway culture, simple measures such as bin enclosures were opening those spaces up so more could happen there.

There were also plenty of walls that could do with colourful murals and areas in need of public art. “Some have some fabulous artwork but a bit more of that would add a nice bit of vibrancy and pop to those laneways that mean we do want to have more festivals in them,” she said.

More greenery would provide relief from the built environment and shade to entice people to stop, rest and play.

“Placemaking is about creating places that people want to spend time in and it’s about those layers, having great green spaces, colour, big trees, small trees, bushes, places for people to sit that aren’t just hard surfaces, and nice amounts of shade. People don’t like things that are too boring and flat,” she said.

More entertainment could be as simple as bringing games into the city or staging a lunch-time dance party. Already there was a chessboard painted on Garema Place – it just needed pieces.

Braddon, which has had a spotlight shone on it recently with the CRA’s Braddon Place Plan, was already a happening area but needed more pleasant public places for people to relax in.

“I think there is colour and atmosphere in Braddon, it’s kind of what makes it a fun and interesting place to be but there’s always room to add more, more public art, floral arrangements, more places for people to sit and enjoy takeaway or sit and have a chat with friends,” she said.

“At the moment there’s just one bench. More public places for people to spend time is really important and will help bring more of that colour and life and beauty that makes Braddon so much fun.”

Ms Neal plans to spend a lot of time walking and talking to business owners and the public, not sitting behind a desk or telling people what they should have or do. She also doesn’t have a bucket load of money to hand out.

She sees herself more an enabler, working with business and finding out what they might need to help them.

“If there are things they just need a bit more advice on, they’re really keen to do some outdoor trading but they just don’t really know how to make that work with the other businesses in the area, I want to talk to [those] people and find out what they want to do and try to help them do that – to really be able to say ‘yes’ where previously some of the business owners may have been told ‘no’ it’s too hard,” she said.

What changes would you like to see in Civic and Braddon?

It won’t be in the Mall’s interest to have Civic recover. The Mall killed it. If it recovers, the Mall might have less trade.

As someone who rarely visits the boring Mall, I hope this can succeed.

Bold plans, let’s see how it turns out by Spring.

Lucas Graydon - 8 minutes ago
Hugh Gregory all the more reason for it not to be simplistic. View
Josh Rawson - 48 minutes ago
If by social credit system you mean the system utilised by some major Europeans nations so a billionaire doesnt get a $200 fi... View
Hugh Gregory - 58 minutes ago
Lucas Graydon it never has applied to the truly rich, but by reducing fines for lower income earners we would only spread the... View
News 8

Brianna - 42 minutes ago
Who is going to be delegated to give these tests and collect the data? View
Opinion 41

Monica Tiffen - 49 minutes ago
☘️Love to see him smile! View
Earthdog - 2 hours ago
The simple answer if you find his behaviour boorish and clownlike is to not watch him. I have restricted my watching sports/... View
Opinion 78

Simon Cobcroft - 54 minutes ago
You sir, are wrong. I have the misfortune of attending two Wiggles concerts AND a Cockroaches concert. Although, my son must... View
Roderick Saunders - 1 hour ago
Gulf Mike I'd rather not be reminded of Pretty Fly for a White Guy View
Nicholas Feeney - 2 hours ago
2006 - #5 I don’t feel like dancin / scissor sisters. The beginning of the end for the hottest 100 but was the end for me.... View
Lifestyle 5

From kitchen scraps to community compost, this recycling project’s heating up