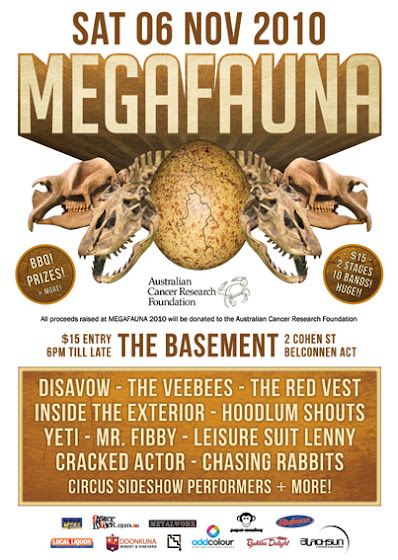 This just in for a great night out:

After three successful shows in 2006, 2008 and 2009, and with over $13,000 raised for Cancer Research, Megafauna music festival is back in 2010. On Saturday November 6th from 6pm we’ll be taking over the Basement in Belconnen with a diverse selection of popular local acts. As always, all proceeds will be donated to the good folk and their work at the Australian Cancer Research Foundation (www.acrf.com.au).

The 2010 line up is just as, if not more exciting as previous years, with rock, caberet, metal, pop and even ‘grog-rock’ all on the menu.

The VeeBees turn ten years old this year, and will be celebrating their 10th birthday at Megafauna. And after all these years they have managed to stick to their guns, pumping out their own brand of dirty rock’n’roll – Grog Rock – as they call it – a vicious Lemmy vs Johnny Ramone riff revving V8 punk machine with Chief-Ocker Norro behind the wheel channelling Rodney Rude. The band’s 6th release Roots’n’Blues”
was out earlier this year, and a new split 7″ vinyl with mexican mates Lumber is on sale at the show.

Hoodlum Shouts combine a tendency to brood with a genuine search for idyllic melody – sleepy hooks sewn into songs you can raise your glass to. The band’s guitar-saturated heavy rock has been described as ‘The ‘Oils on Valium’. The band recorded their debut six-track EP ‘Horses and Human Hands’ with Russell Pilling, which was self-released in June ’09. In November ’09 the band won the Triple J Unearthed competition to playat the Trackside Festival in Canberra alongside The Hilltop Hoods and Tame Impala.

The Red Vest
Introducing The Red Vest – they keep it loud, heavy and experimental. After a year of dynamic live shows, their debut release “Don’t Make A Sound…” is out in early October. If you like having your ears blasted with big guitars, drums and screams and then nursed back to health moments later with soothing basslines, piano and crooning vocals, keep an eye out for The Red Vest at MEGAFAUNA 2010. They are hitting the road soon to make sounds from “Don’t Make A Sound…”

Mr.Fibby
Mr. Fibby is an awful band full of mean people that tell terrible stories and make everyone very upset.

Leisure Suit Lenny
The one man rock band/coordination experiment. Playing a full kit of drums, guitar and singing, it is a rarely seen spectacle definitely worth checking out.

Inside the Exterior
Inside The Exterior are a band of riddles and metaphors, nothing is straightforward about their music. Some liken their sound to a kebab – a composition of the dirtiest and most unpleasant ingredients you can find, rolled into a palette challenging taste sensation that no one can turn down. The capital city math metal entrepreneurs are currently recording their second release at ‘The Brain Studios’ in Sydney, which is due for release in Feb 2011. Inside The Exterior look forward to taking the Megafauna stage to deliver their dynamic and intrusive live show that never fails to demand attention.

Yeti
If you got some playdough and made a miniature replica resembling the Mediterranean coastline of the French Riviera, then put that replica on the dashboard of your car and left it through summer, what would be left would almost be a visual interpretation of Yeti’s sound if they were playing underwater. Be there.

Cracked Actor
Cracked Actor are a woozy, pretty, strummy mirage. They’ll draw you in from a distance with an angelic voice, a lush arrangement, a wink, a smile, but up close- whoosh!- they’re a beautiful dream. It won’t stop you being drawn in though, you’ll see.

Disavow
Harking back to the 80’s is an all too common offense in modern music, but there’s no dayglo colours or fashion in Disavow. Primative, angry and ugly d-Beat in the spirit of Discharge featuring ex-members of Bladder Spasms, Hard Luck, Blood Duster, The Vee Bees and I Exist, Disavow unleash their brand of twin guitar d beat and take no prisoners.

All this on two stages for continuous music enjoyment. We’ll also be
selling snags and veggie burgers for a small price, so there will
really be no need to go anywhere all night.

Jenny Graves - 18 minutes ago
Kit Oates those people who get impatient, in my experience, tend to tailgate. If you don't, then that's great and I apologise... View
Alex Dee - 1 hour ago
You need to get out more. View
Francesco Merlino - 1 hour ago
Alex Dee Alex Dee I hope you are right! View
event 1

Dom Polegubic - 36 minutes ago
This is a good link to an intro to Croatian wines: https://winefolly.com/deep-dive/introduction-to-croatian-wines/... View
Opinion 11

Deepak Ramanath - 57 minutes ago
James Forge Wow, where is this? View
James Forge - 58 minutes ago
Deepak Ramanath the government is about to demolish an overpass and replace it with yet another set of traffic lights View
Kylie Wylie - 1 hour ago
Residents of Lyons suffer badly every work day. Every main road is gridlocked with rat runners that mostly won't even let oth... View
Lifestyle 2

Ol L - 2 hours ago
Good friend passed out the evening after after the AstraZeneca shot, hit her head and had 10 stitches. Not a blood clot so no... View
nothappyjan - 3 hours ago
Had pretty much the exact same side effects as you, suppose it shows it is actually doing something for my immune system. Wil... View
John Moulis - 4 hours ago
It's broken mate. In 2011 I received a swine flu injection from my GP without any problems at all. I simply phoned up, made a... View
News 25