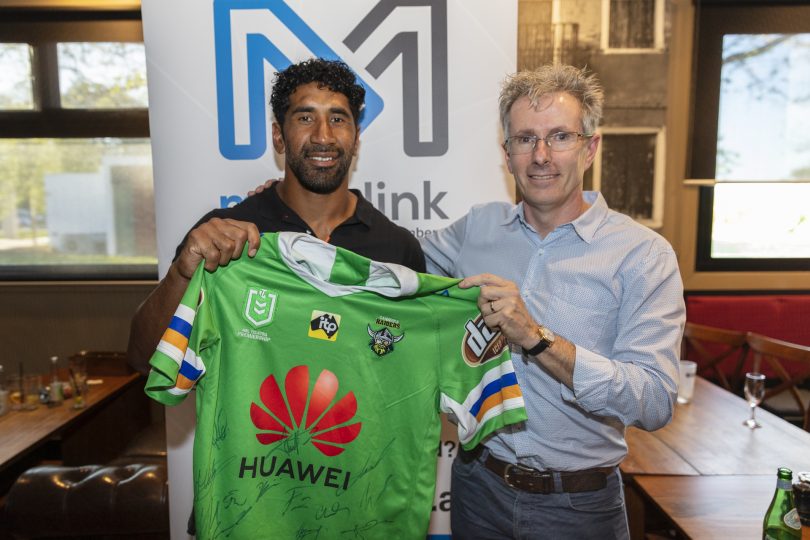 Sia Soliola and Martin Fisk: the Raiders have been role models in the ‘It’s not weak to speak’ campaign. Photo: Thomas Lucraft.

In a year when so many more young boys and men are facing life-changing challenges, hearing and being able to look up to community figureheads and role models to build resilience is more important than ever, according to Menslink CEO Martin Fisk.

Mr Fisk says demand for services has shot up 60 per cent from the same time last year while revenue has fallen 20 per cent due to COVID-19.

“Resilience has always been a big issue for our young people and it is all around the ability to have a setback, a challenge, a tough time and being able to bounce back from that,” he says.

“Even for younger boys and men, their parents might be experiencing financial hardship which is causing strain in the family relationship. We have seen a lot of families break up this year due to financial stress.

“School leavers are looking at significant levels of unemployment that no one in their generation has ever experienced.”

Despite having similar rates of mental illnesses as woman, men are three times more likely to die by suicide.

This can partly be attributed to the fact that men find it harder to speak out about their problems, which is why having role models like the Raiders join the ‘It’s not weak to speak’ campaign is so important, Mr Fisk said.

“Men have an inherent belief that they should be problem solvers, not problem creators, so there is a sense of shame that we feel when we have made a mistake or there is a problem we feel we are unable to cope with,” he says.

“If we are feeling like we are a burden, asking for help makes us feel like we are more of a burden.

“There are not enough male-friendly places to talk. I think Menslink and EveryMan, two Canberra born-and-bred organisations, are leading the way for providing those safe places.” 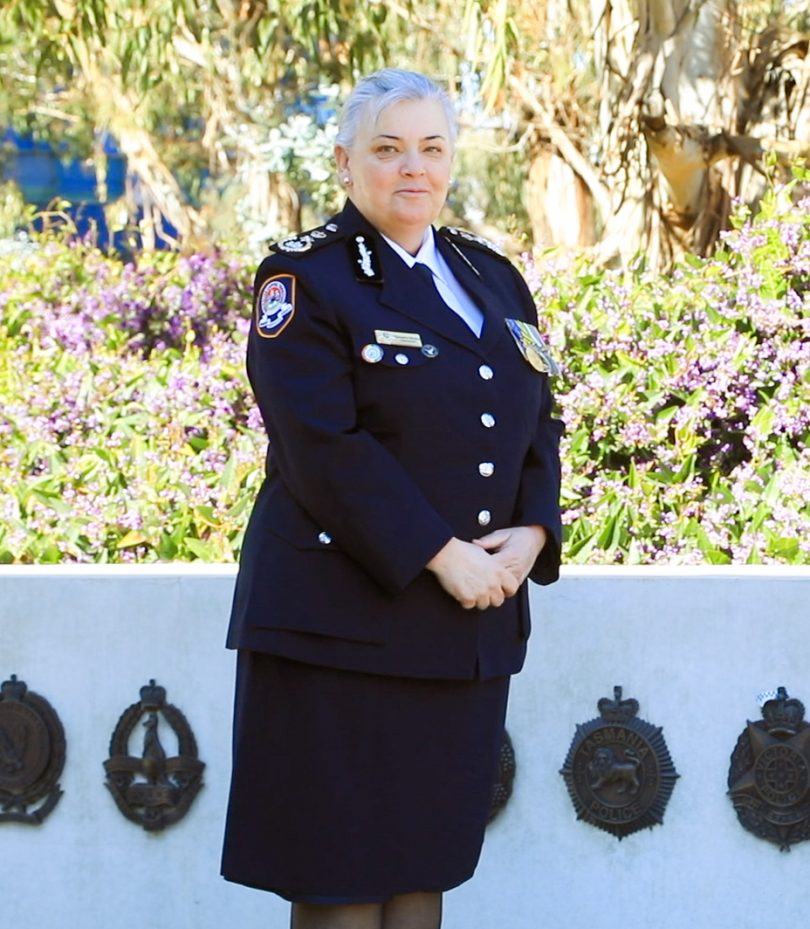 This year’s Menslink Business Breakfast will be held on Tuesday, 27 October, and the speaker will be ACT Emergency Services Commissioner Georgeina Whelan.

The 100 per cent online event begins at 7:30 am and will be broadcast from the Region Media studio.

Commissioner Whelan became the face of the ACT’s response to its worst bushfire season since 2003 earlier this year.

She will be speaking on the topic of resilience after leading complex recovery and rebuilding efforts after experiencing tragedy in her role as Commissioner and her prior military career, as well as how she continues to deliver positive leadership under pressure.

“Every year we hold our business breakfast and get more than 500 Canberrans from all walks of industry and government and education to hear an inspiring speaker to talk about a topic of relevance,” Mr Fisk said.

“This year we thought it was important to still proceed with something to be connected with the wonderful people in Canberra who support us and talk to them about what we do and why we do it.”

The money raised through the breakfast funds Menslink to help young and vulnerable Canberrans. Even before COVID-19, demand was surging by about 30 per cent a year.

This year’s event is a ‘pay what you can afford’ ticket to join the broadcast. If your workplace commits to $1,000 or more you will receive acknowledgment during the event and for the rest of the year as a Menslink sponsor.

All of the profits from the event go directly to support programs that have been supporting young men in Canberra since 2002.

For more information about the Menslink Business Breakfast, or to book tickets, visit Menslink.

Scott Evans - 8 minutes ago
Homelessness is across all genders, the Queanbeyan bus is not targeted for just woman and children and there has been more me... View
Milenko-Slavenka Jovanovic - 33 minutes ago
Fantastic! View
Catherine Udovicic - 8 hours ago
If this is for women and children who have to escape violence in their own homes, I wouldn't worry about the men unless they... View
Community 5

Samuel Gordon-Stewart - 48 minutes ago
It is a flannelette shirt. I will not tolerate abbreviation of this particular garment. View
News 13

TheSilver - 1 hour ago
Yay, more subsidies for the rich at the expense of the poor. View
JS9 - 9 hours ago
So Tim, where is anyone telling you you have to buy an EV now? Noone is, and most will purchase an EV when it stacks up for t... View
Lifestyle 15

Elizabeth Farrar - 1 hour ago
Linda Jepsen have you done this walk? View
News 132

Eric Katic - 2 hours ago
If you live in any west Belconnen suburb, don’t bother clicking on the link. View
Simone Eagan-Akuhata - 3 hours ago
Symantha Lee you’ll be on the list at age 33, just you wait 🤣🤪 but really... let’s manifest those dreams 🤗 View
Ashley Wright - 9 hours ago
Nigem Hamedeh the article is about median house price not highest. View
News 19

Julie Macklin - 8 hours ago
No, not everyone has young children. If someone wants to stay away from things on Sunday, they can now. They can make their o... View
Christopher Cuba Rabanal - 10 hours ago
How about a six day week with every Sunday shut. Where everything is closed in a Sunday Sunday is family Day ?... View
Community 44

Colin Ball - 11 hours ago
Why do they get game consoles?it's meant to be a place for punishment not reward, what about the people who have worked hard,... View
Food & Wine 1

Not that long ago, my partner and I were part of the teeming masses of young people trying to get...
News 132

The Canberra Liberals have lambasted the ACT Government for focusing on issues that don't affect Canberrans and trying to turn...
Community 40

More than 1000 Canberrans across six suburbs have been given the chance to change the look of their streets as...
Property 21

For a planned city that is supposed to be a shining light on the hill, Canberra is rotting at its...
News 19

@The_RiotACT @The_RiotACT
Canberra's innovative National Health Co-operative has gone into voluntary administration, citing an unsustainable financial situation as JobKeeper ends. Appointments can continue to be made at NHC clinics https://t.co/DhAoeEbk7Z (13 minutes ago)

@The_RiotACT @The_RiotACT
When John and Rose Bell purchased a dilapidated 1800s inn at Breadalbane, they saw the potential to turn the historic building into a wonderful family home https://t.co/tuqP7K0u3s (58 minutes ago)

@The_RiotACT @The_RiotACT
'She's on the Bill' is the brainchild of local musician Sophie Edwards and is designed to give female and gender non-conforming artists opportunities in the music industry https://t.co/K00fNGvshk (11 hours ago)