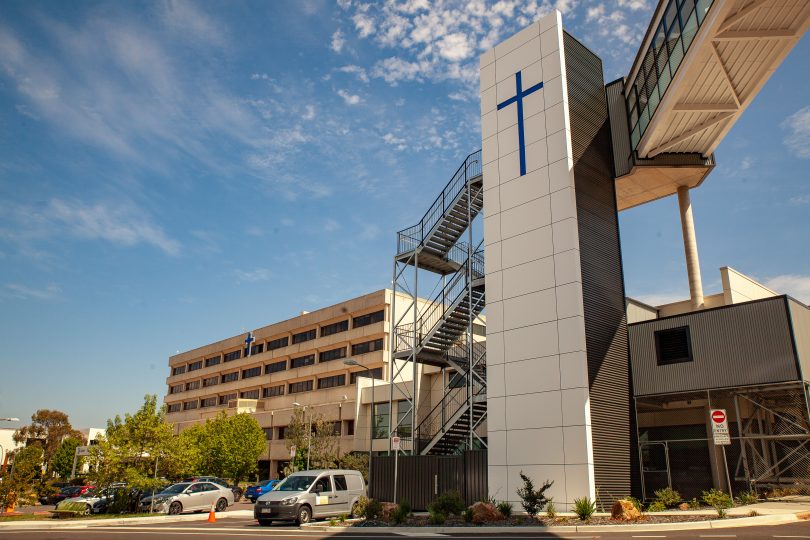 Calvary Private Hospital at Bruce has made the surprise decision to close their postnatal maternity ward on April 28, limiting private birthing options for women on Canberra’s northside. The Hospital says it’s simply unable to find enough midwives to consistently staff the ward.

In a statement, Calvary Private’s General Manager Elaine Bell said the decision had been made “after extensive national and international recruitment efforts failed to attract sufficient suitable candidates to the midwifery team”.

Ms Bell said that Calvary Private had invested significant resources into their post-natal service over the past two years to try and resolve the situation. However, it came down to a structural issue based on the level of services offered, and for that reason was unlikely to change.

“Patient care and safety is our number one priority,” she said, explaining that the Calvary Bruce Private Hospital service was originally established as a postnatal model only. The lack of a birthing centre had hindered the private hospital’s ability to attract and retain midwives because of their preference to gain experience in a facility which offers a full obstetric service.

“Without a long-term and stable midwifery team, the only option was to no longer offer post-natal services. We have contacted all the women booked into the service and have begun discussions around alternative birthing and postnatal care options available to them.”

“Specialists will be able to offer women private birthing and postnatal care at Calvary John James Hospital or Calvary Public Hospital and we can assure them that their continuity of care will not be disrupted,” Ms Bell said.

The Calvary Public maternity ward re-opened in July 2018 after an extensive refurbishment valued at around $2.6 million. The revamp was funded by the ACT government in response to continuing population growth in Gungahlin, West Belconnen and Molonglo.

The decision reflects a growing shortage of midwives across Canberra maternity services, and a movement towards public hospitals following the end of the baby bonus. Anecdotally, some midwives prefer working in a birth centre setting where they are able to provide a full range of services through pregnancy and delivery. Midwifery-led care is more typically available in a public hospital setting, while private patients will choose obstetric-led care.

Anyone who may still have queries about the closure of services is encouraged to contact Calvary Private Hospital on 6245 3100.

Saw a flyer at work last week about this

Adam Sturgess that is so sad.

Cassandra Kelly yeah pity. Was such a good ward

Sammi Makings 😧 hope it wasn’t on your shortlist!

Mitch, we were so lucky!

Chris Flint glad I made the decision to drive past Bruce and go to JJ anyway!

Tracey Best it’s not there anymore. It got moved to the new premises, but doesn’t have birthing facilities.

I feel for the women who are about to birth, paying for it privately and have now been told to go elsewhere. If it was me and the option of a public hospital was given to me I’d be annoyed, private patient or not in a public hospital doesn’t guarantee you a private room. Sure, there’s JJs but there mat ward also includes gynae. How uncomfortable for both worlds; a share room for instance-1 has a baby and the sharing woman has had a hysterectomy. Nah. I realise this change has been made due to staffing but geez..!

Caterina Garreffa I just made it 😡

Carmelina Bono that’s the health system for you. Very sad!!

Aimee Marsh yes I saw this!!!

Sad but not surprised, I work in the private health sector and also struggling to recruit staff.

Is ACT not attractive enough for professionals to relocate here? What's going on?? (Honest question)

They struggle cause it's a SHITE HOSPITAL

Jess Radovanovic well you’ll find a job for sure

Alison - midwife shortage is good for you and your studies!

Emma Bickley yes it is! Definitely will be discussed in class next week

Nicola I just mentioned it to her.... she would like to study it after she becomes a nurse😀

A very sad situation The midwives there are very upset

Monica Crane oh no! This is crazy! I hope it isn't for too long! Makes me want to be a midwife!

Monica Crane our midwife (YOU especially ❤️) experience in June postnatally with Harvey was nothing short of amazing. I’m sad to see this happen.

I had my baby boy there 20 years ago - very positive experience. This is so sad! Hang in there fabulous midwives!

Monica Crane I’m so sorry to hear about this. I hope you are able to find a place that appreciates the amazing job you and the other midwives at Calvary private have done.

Monica Crane yes you were there when I had both boys and you were all amazing, couldn't do it without you all!

The midwives at Calvary private are wonderful - this is very sad news and such a loss for new mums in the area.

Phillip Sayer - 2 hours ago
Time to wrap them up. View
News 68

Benny Hip - 3 hours ago
This obviously isn’t meant to be taken literally, it applies to any manufacturers of dairy products 😂 Sara-Rose Byrne View
Janine Campbell - 4 hours ago
Squeak Brookes have you not been there ever 😱 View
Linda Appelgren - 5 hours ago
Do it Emma! We will come too. View
News 6

Joanna K Heathen - 14 hours ago
Poor wildlife and habitat. :-( View
Greg Batten - 19 hours ago
Huge thankyou to those who stood in harm’s way to protect us from this beast. View
Rob Sanders - 19 hours ago
That's brilliant news View
Opinion 6

Mark Goodman - 16 hours ago
Budget deficits are not a terrible thing, particularly when interest rates are so low and the economy is struggling. The prob... View
Entertainment 3

Michelle Gr - 19 hours ago
Keo my experience has been it’s inclusive of uni students mainly who are really drunk. Added to this the venue has poor sou... View
show more show less
*Results are based on activity within last 7 days

A new ticketing system is on the way for Canberra's public transport network, promising passengers a variety of flexible payment...
News 126

A landslide has closed the Snowy Mountains Highway, west of Bemboka, in both directions. Live Traffic NSW reported the incident...
News 0

The Bureau of Meteorology (BOM) has forecast possible large hail and severe thunderstorms across the ACT and southern region of...
News 1

Village Building Company's proposed $140 million housing development in Weston has been rejected by the planning authority in a Notice...
News 3

The ACT Government is set to spend $200,000 on a feasibility study to determine the best location to build a...
News 126

The 1.7 kilometre extension of light rail from Alinga Street to Commonwealth Park via London Circuit will be wire-free, in...
News 112

Chief Minister Andrew Barr will launch his government's re-election bid this afternoon with a blatantly political speech to the Legislative...
News 68

Northside women face push to have babies at Calvary

Calls for ‘restrictive’ home birth trial criteria to be relaxed

@The_RiotACT @The_RiotACT
The ACT State of the Environment Report is out, so here’s a look at how we are travelling when it comes to indicators like climate change, biodiversity, water, waste & overall consumption https://t.co/s5WGSJlIbi (25 minutes ago)

@The_RiotACT @The_RiotACT
Cancer patients will benefit from a more comfortable and less isolating environment at Canberra Hospital's newly opened 22-bed ward. Check out how the first stage of the $17.3m redevelopment will make a difference for patients from Canberra and the region https://t.co/9KYjJRuh4E (2 hours ago)