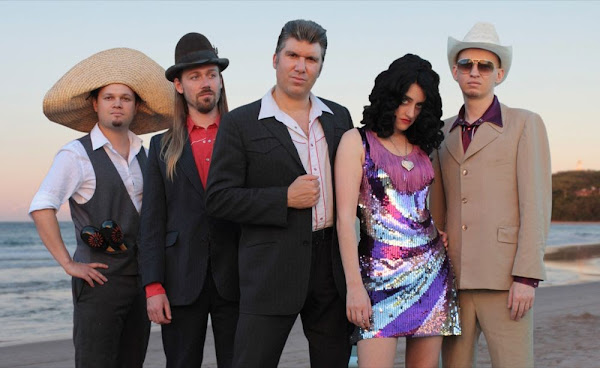 This has come over my desk and looks exciting as Canberra’s sons come home for a gig:

“Mikelangelo and the Tin Star” have just returned to Melbourne following their exploits on the Amanda Palmer Goes Down Under Tour. In a stack of sell-out shows, from Fremantle to Bryon Bay to Melbourne, the Tin Star opened the evenings’ proceedings with their own brand of surf’n’western tunes, then dropped in behind Amanda to become her band, giving her songs a decidedly rock and roll edge.

Now sporting a new EP, “Floodhouse”, the band are returning to Sydney and Canberra, for some raucous nights of misadventure.

“If Las Vegas had a beach, and a clone made from the mixed DNA of Elvis Presley and Nick Cave had a band that played surf rock on that imaginary beach, then the music Elvis Cave’s band played would sound like Mikelangelo and The Tin Star. It’s like being in the opening credits of a Russ Meyer movie.” : RAVE Magazine

Mikelangelo has toured the world as a star of the Olivier-award winning “La Clique”, and has a national and international profile with his group “Mikelangelo and the Black Sea Gentlemen”. He is one of the leading creative artists in Australia today – constantly pushing new boundaries with his work, receiving critical acclaim and entertaining audiences far and wide.

He has returned to Australia to form a new outfit: The Tin Star. Energetic, charming, and at times hilarious, this Melbourne-based 5-piece band of fine musicians knows how to entertain a crowd. The tunes are all Mikelangelo originals, the style is resolutely Surf’n’Western, with plenty of twanging instrumental dance tunes and sordid tales of love, death and despair.

They are joined on stage by the mesmerising Saint Clare – heating up the room with her sultry voice and wild moves. Mikelangelo declares, “I’ve had the pleasure of singing duets with some of the greatest cabaret singers of our time, but never before have I encountered a voice of such clear, pure beauty as the voice of Saint Clare.” Mikelangelo and the Tin Star make audiences twist, swagger and crack that crooked gun-slinging smile.

It’s always High Noon when Mikelangelo hits a saloon, a stage or when he heads to the beach with his longboard. He and the Tin Star return to Sydney, Canberra and Newcastle with the finest in Western Surf songs and twisting by the pool dance tunes, and Saint Clare’s go-go moves will make you swoon.

Robert Lang - 9 minutes ago
Kirsty Noad I work in the trauma operating theatre of Canberra Hospital. I have not seen any scooter injuries. I see major tr... View
Robert Lang - 11 minutes ago
I too gave a hearing disability. I stand to the left of all shared paths. No problem. View
Robert Lang - 12 minutes ago
Cheryl Thuillier yep, and let’s make car drivers wear helmets too. After all, car crashes are the number one cause of head... View
Opinion 55

Luke Costanzo - 29 minutes ago
Michael Pearson zero facts or fact checking. All conjecture and clickbate. Try again View
Julie Macklin - 48 minutes ago
I had my first Astra Zeneca vaccination last Thursday. Initially all I had was a slightly sore arm, which soon faded. However... View
Luke Costanzo - 1 hour ago
Jeannou Zoides check mine out with the nice NHS logo. I had it 3 weeks ago and I am still alive. Problem with the anti vax co... View
News 1

ChrisinTurner - 39 minutes ago
I hope the panel addresses the problem of attracting technical specialists like engineers and certain IT people. The current... View
News 22

@The_RiotACT @The_RiotACT
Quarterly data is showing the ACT as the shining star of the national recovery https://t.co/oL5UFOqkvw (57 minutes ago)