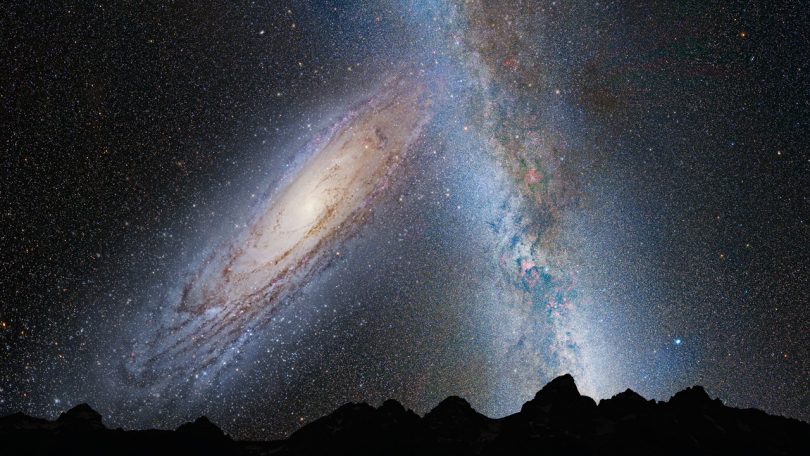 A long time ago in a galaxy not so very far away, a violent and hungry galaxy took its first bite into its neighbour. Now nearly 10 billion years later, that same ‘cannibalistic’ galaxy has set its sights on the Milky Way as its next main course.

Her name is Andromeda, and she is 2.5 million light-years from Earth.

Thankfully, Andromeda’s dinner reservation with the Milky Way is in four billion years.

Her eating habits have been the focus of an international study which was co-led by local astronomer Dr Dougal Mackey from the Research School of Astronomy and Astrophysics at the Australian National University.

Dr Mackey and his research team have pieced together the cannibalistic past of our neighbouring galaxy, discovering that Andromeda has eaten several smaller galaxies over the last few billion years.

The detective team also found very faint traces of more small galaxies that Andromeda gobbled up even earlier, perhaps as far back as 10 billion years when she was first forming.

“Knowing what kind of a monster our galaxy is up against is useful in finding out the Milky Way’s ultimate fate,” Dr Mackey said. “Andromeda has a much bigger and more complex stellar halo than the Milky Way, which indicates that it has cannibalised many more galaxies, possibly larger ones.”

The signs of ancient feasting are written in the stars orbiting Andromeda, with the team studying dense groups of stars known as globular clusters to reveal the ancient mealtimes.

“By tracing the faint remains of these smaller galaxies with embedded star clusters, we’ve been able to recreate the way Andromeda drew them in and ultimately enveloped them at the different times,” Dr Mackey said. 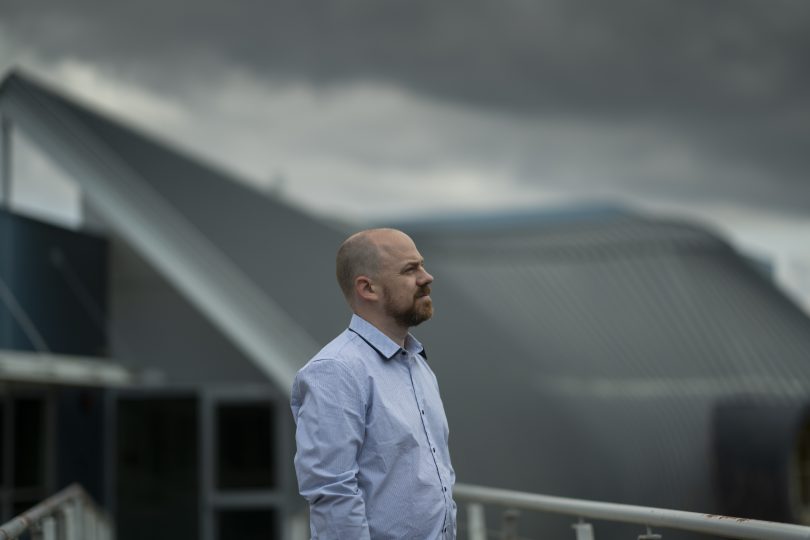 As well as putting the universe on notice about its impending date with Andromeda, Dr Mackey said studying our hungry neighbour also helps astronomers understand how the Milky Way has grown and evolved over billions of years.

“One of our main motivations in studying astronomy is to understand our place in the universe,” Dr Mackey said. “A way of learning about our galaxy is to study others that are similar to it and try to understand how these systems formed and evolved.

“Sometimes this can actually be easier than looking at the Milky Way because we live inside it and that can make certain types of observations quite difficult.”

Professor Geraint Lewis from the University of Sydney, who co-led the study with Dr Mackey, said the discovery opens several new mysterious cases for the team.

“The two bouts of galactic feeding came from completely different directions,” Professor Lewis said. “This is very weird and suggests that the extragalactic meals are fed from what’s known as the ‘cosmic web’ of matter that threads the universe.

“We are going to have to think quite hard to unravel what this is telling us.”

The study was published in Nature.

We already know this... And I guarantee there will be no humans around to see it.

Oan Nbn - 8 minutes ago
Best is to have a train route to Yass and connect to National Line from Kingston- Yarralumla- BELCONNEN- Spence and follow Ba... View
Robin Eckermann - 8 minutes ago
Peter Elford New terminus at Gunghalin so there's something other than dormitory hi-rise buildings to feed the tram. View
Elizabeth Ann Thurbon - 17 minutes ago
And when tourists arrive at this station they are left wondering is this really the capital of Australia. They arrive seeming... View
Opinion 188

Ben Garden - 17 minutes ago
How about we get something that’s actually fast like formula one rather than a car I can beat in a drag race in my daily dr... View
Naomi Breasley - 2 hours ago
Sounds teriffic, It will never happen too many Kevin's & Karen's. People's reaction to Summernats is a clear indicator of som... View
Opinion 6

Judi Teesdale - 48 minutes ago
Totally agree Barb View
Elizabeth Woods - 1 hour ago
Barb Campbell excellent observation, Barb View
Acton - 2 hours ago
Those who habitually malign any local residents who oppose the removal of green spaces as NIMBYs should volunteer to have the... View
Opinion 1

Acton - 4 hours ago
No way. The removal of civil liberties and everyday freedoms is too high a price to pay. A democracy is not compatible with a... View
Business 1

Acton - 4 hours ago
The ATO should expect to collect less tax this year because of falls in income and dividends. There will also be delays in su... View
show more show less
*Results are based on activity within last 7 days

@The_RiotACT @The_RiotACT
Did you feel the earth shake? We've got reports of tremors across Canberra, and as far as Batemans Bay and Braidwood. More to come, but tell us what you felt https://t.co/zu4C8IoIqn (23 minutes ago)

@The_RiotACT @The_RiotACT
Twenty-six years ago, it looked like the #ACT might be the new home of the financially troubled Fitzroy Football Club. It wasn't to be, and according to Tim Gavel, if the #AFL expands, Canberra's probably going to be overlooked again https://t.co/420JiLATWd (3 hours ago)