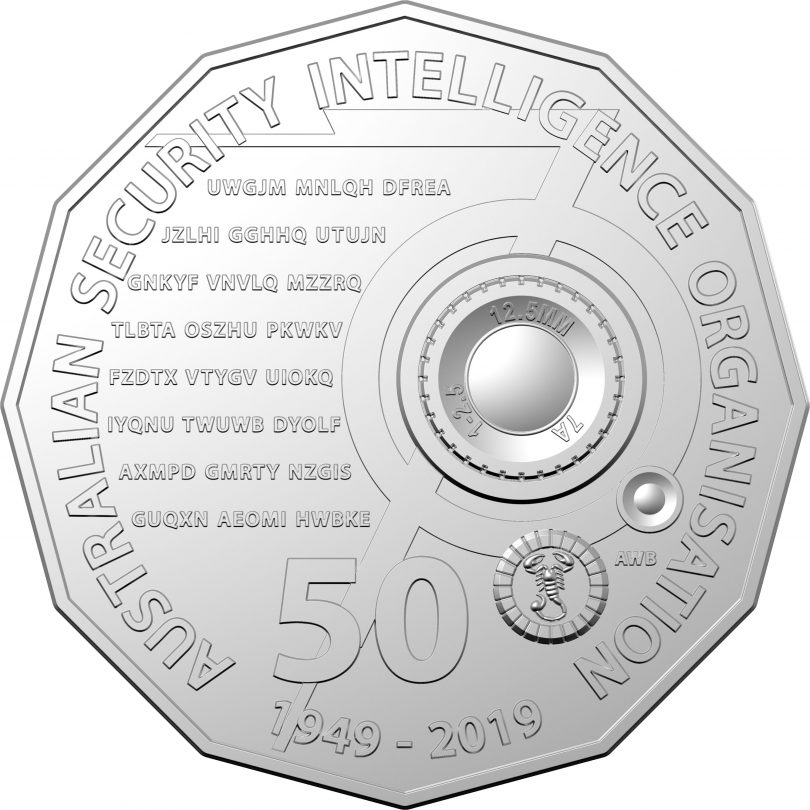 The secret message on a recently released coin commemorating the 70th anniversary of the Australian Security Intelligence Organisation. Photo: Supplied.

The Royal Australian Mint has commemorated the 70th anniversary of the Australian Security Intelligence Organisation (ASIO) with a specially minted 50-cent coin that includes an encrypted message.

The competition, Coincryption, saw more than 1000 entries from the Australian public and coin collectors. The winner, Andrew Olsson from Queensland, not only decrypted the message but then he had to be drawn out of the winning entrants. His prize is the only proof coin in existence that features the 70th anniversary of ASIO coin design.

Royal Australian Mint CEO Ross MacDiarmid said the Mint was thrilled to share yet another unique coin release and exciting competition that resonated with the Australian public, further engaging interest in the age-old hobby of coin collecting.

“The Royal Australian Mint is honoured to commemorate the last seven decades of ASIO’s important work with the very first coin produced by the Mint featuring an encrypted code similar to that used by operatives during the Cold War,” Mr MacDiarmid said.

Can you crack the code on a coin that celebrates the secret and elusive world of spies and espionage? Don’t cheat: the answer is at the bottom of the story.

To crack the code, Andrew deciphered the secret message encrypted on the uncirculated coin using a One-Time Pad – a key similar to that used by operatives during the Cold War.

During the 1940s and 1950s, the Soviet intelligence service, the KGB, used One-Time Pads to encrypt their cables to and from Moscow. Poor encryption practices allowed the 5-EYES allies (the US, UK, New Zealand, Canada and Australia) to decrypt some of the cables under Operation Venona, revealing the presence of a Soviet spy ring active in Australia and prompting the United Kingdom to urge Australia to establish a security service, leading to the establishment of ASIO in 1949. 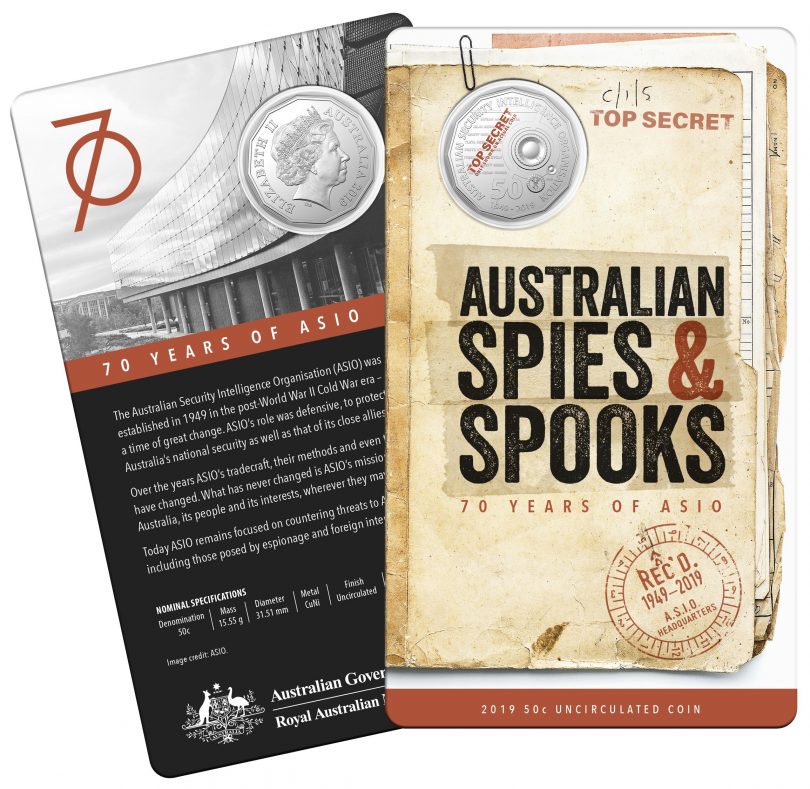 The Director-General of Security at ASIO, Mike Burgess, said it was exciting to see so much interest in ASIO, its 70th anniversary and the commemorative coin.

“Spooks and spies is an intriguing theme and often the stuff of novels and film. It is exciting to see this theme interpreted in such a creative and enduring way,” Mr Burgess said.

“2019 is a milestone year for ASIO, offering a natural point of reflection to commemorate our history and celebrate our success, our people and our culture. It marks 70 years of ASIO’s service protecting Australia and Australians.”

The 2019 50-cent uncirculated 70th anniversary of the Australian Security Intelligence Organisation coin is available in a limited mintage of 20,000, retailing for $10. The coins are Australian legal tender and can be purchased from the Mint’s website or contact centre (1300 652 020).

The Mint will be holding further contests in 2020.

Following the recent completion of the competition, the Mint can reveal that the secret message on the coin reads “there is no greater honour than the trust of the Australian people or weightier burden than protecting the security of Australia and its people”.