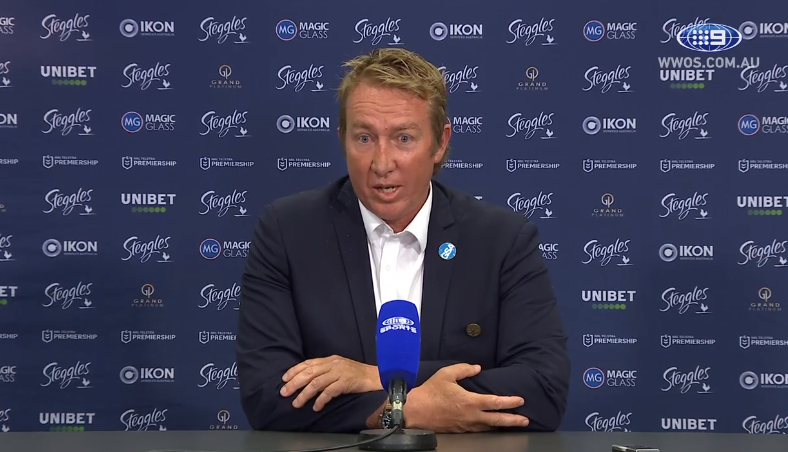 South Sydney star Latrell Mitchell’s timing could not have been worse. Not only was his sickening hit on the Roosters’ Joseph Manu late, but it also came a few weeks out from finals.

Now both players’ seasons may be over – Manu with a fractured cheekbone, and Mitchell after being charged with a grade two reckless high tackle, which brings a six-game penalty with an early plea and nine if he chooses to defend it and is found guilty.

Mitchell has form, going for four games earlier in the season for a grade two dangerous contact charge.

Most pundits say no Mitchell, no chance for the Bunnies.

Roosters coach Trent Robinson was ropeable, particularly with the referee and the much-maligned Bunker for taking so long to respond to what had happened.

It seemed to take the high drama of Manu getting off the deck and walking across to his ‘good mate’ to confront him about what had happened before the officials decided to do anything about it.

The context was an already spirited encounter ratcheting to a new level as the Roosters mounted a comeback and threatened to breach the South Sydney line.

READ MORE What might have been had Craig Bellamy been appointed Raiders coach in 2001?

It was fast and furious action, just the kind of entertainment the NRL has deliberately set out to manufacture by changing the rules to turbo-charge the game.

Players have to make split-second decisions subject to slow-motion replays that bear no resemblance to the live-action.

This quest for speed collides with the other imperative driving the game, the duty of care for the players/employees in their workplace, as the awful toll that concussion and brain injury takes on footballers generally across all codes becomes clear.

The head-high tackle has long been illegal since the infamous coathanger days. The spear and crusher tackles have been added to the no-go list, not to mention the chicken wing and shoulder charge.

While as schoolboys we were all told “he can’t run without his legs”, the demands of the modern game to smother the ball carrier to prevent offloads has given the game the gang tackle and a target area on the torso that increase the risk of a miscalculation, especially at speed.

Defence coaches spend a great deal of time and effort training players to tackle this way, and why wrestling techniques have been deployed, all to kill the ball or force an error.

This does not excuse Mitchell’s reckless attack on Manu, which was late and did not even look like a tackle, but that is the environment the players are operating in.

Given the NRL declaration of war against high tackles, Mitchell should have been marched for the rest of the game, not just 10 minutes in the sin-bin.

The horror of watching Manu’s face swell as the extent of Mitchell’s hit became apparent was not a good look for the game, no matter how many legends moan about the game getting ‘soft’.

The game – which has become a much more diverse, skilful and athletic spectacle – is still gladiatorial enough without the unprotected ball carrier’s head being subject to attack, and causing the kinds of long-term injuries taxing the minds of administrators and wreaking havoc on players’ families.

The onus is on coaches, from an early age, to teach players what is an acceptable tackle and for administrators and officials to be clear and consistent about what is allowable and what is not.

It may even mean an adjustment downward to what constitutes a high tackle to reduce the margin for error.

It is probably too late to ask a mature and instinctive player like Mitchell to remove a potentially dangerous element from his game, and that’s something he and whomever he plays for will have to live with.

If the price of reducing the risk of head injury is making it easier for the ball carrier to offload, that is probably one worth paying, and it might make the game even more attractive.

If Mitchell’s banning comes at the cost of a premiership, perhaps the sorry affair will not be in vain, and be just the kind of incentive for clubs and coaches to get real about preventing such incidents.

It would be great if Latrell switches code to soccer.

Dose not help players dropping to their knees or falling into a tackle to earn a penalty.