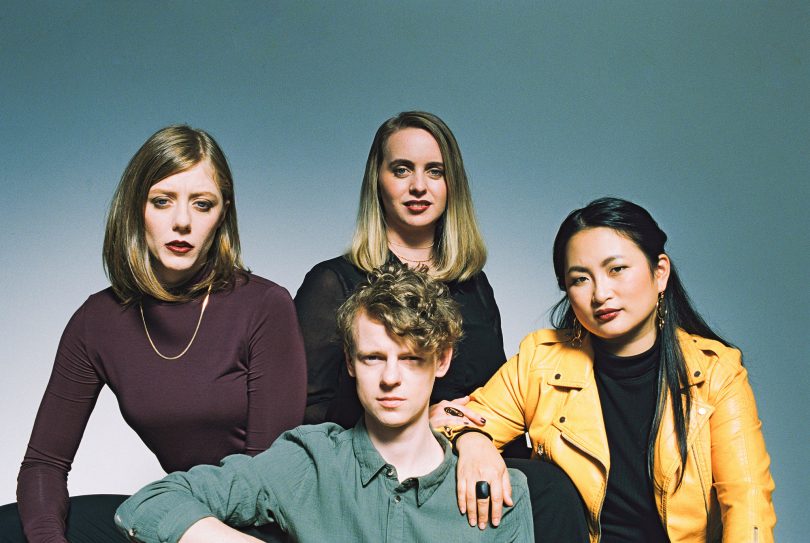 Hayley Manwaring, Charlie Versegi, Ellen Chan and Hayden Fritzlaff have been on a rollercoaster the past three years. Photos: Supplied.

In 2016, a band of four Canberra-based music grads came together to play their first show in front of a small audience filled by their friends. Blink and three years fly past in what can only be described as a whirlwind for Moaning Lisa.

Casting her mind back to the days before she was the lead singer of a popular band, Charlie Versegi was just a university student with no thoughts of becoming a frontwoman.

“I was deciding whether to be a producer or a manager and I had everything on my mind except performing,” Charlie reminisced. “Performing is what I love to do but I never thought I was good at it.

“I was always quite studious as a kid and throughout high school and I would do really well in every subject besides music. I was really good at music theory and composition but when it came to performing, I would get marked really badly. So I took that to mean I wasn’t good at it.

“So I had this suppressed sort of passion happening, which was bubbling underneath. It wasn’t until Ellen approached me that something sparked for me. I had all this stuff, that I wasn’t ashamed of necessarily, but I was trying to squash because I thought I couldn’t do anything with that.

“I had a lot of inner turmoil and identity crisis before being able to come out and bloom, if you will, with this beautiful group of people. This band has helped turn me into a confident person.” As the calendar turns on their third year anniversary, Moaning Lisa has released its latest single Take You Out – a song that symbolises the emotional growth of the band as their sound continues to evolve and develop.

The track epitomises the band’s coming of age, blossoming from a local Canberra band starting their musical journey on the stage at Transit to a nation-wide fan favourite performing in front of crowds at Splendour in the Grass next month.

Written by Hayley with interjections from the band, including the second verse which was penned by Charlie, Take You Out tells the story of the sparks of attraction and the mind racing to the future together before even buying them a drink.

“I think this song showcases another side to us which has always been there but we haven’t unleashed on the world yet,” Charlie shared. “We recorded it before going on tour with DZ Deathrays and we played it every single night on that tour and people just loved it.

“It was such a highlight of the set because the moshing stops and everyone started dancing. It’s a fun song that has those dark elements, like the feeling of anxiety and inadequacy, which we love to slide in there. We have to make it Moaning Lisa.”

With as much passion that is being displayed in the pursuit of the “one” that you dream of taking to meet your parents, Moaning Lisa is pursuing its dream, moving to Melbourne to explore new frontiers. Though they still call Canberra home, the band of four are still working through their identity crisis in infant stage of their existence.

“A lot of big stuff has happened since we started and it is hard not to get caught up in it all,” Charlie shared. “So after the Do You Know Enough? EP came out, we felt like we were starting from scratch again.

“It was hard not to fall into another identity crisis, having to rethink everything and adjust to new circumstances.

“I feel like we are coming of age. We are in our band’s puberty and I am just looking forward to being an adult.”