Mobile muster: How your old phone could be worth $1,000 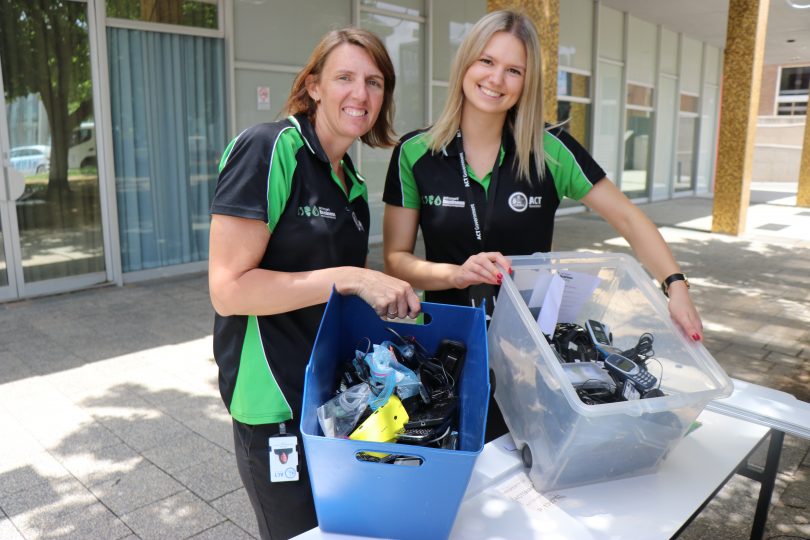 Some of the hundreds of mobile phones already handed in. Photo: Supplied.

Recycling your unloved mobile phone is not only the right thing to do it could win you $1,000.

Already hundreds of mobile phones have been handed in as part of ACTsmart’s mobile round-up recycling competition, held as part of National Recycling Week.

Minister for Climate Change and Sustainability Shane Rattenbury said mobile phones needed to be kept out of landfill and the competition was a great opportunity to boost mobile recycling in Canberra and generate awareness of the economic and environmental benefits.

“More often than not, old mobile phones and accessories are sitting unused in our homes, or worse still, going to landfill. Research has found there are approximately 23 million unwanted mobiles in Australian homes and while 77 per cent of people are aware of mobile phone recycling, only 31 per cent have actually recycled a mobile,” he said.

Mr Rattenbury said many people did not realise that their unwanted mobiles were a treasure trove of valuable materials, including gold, silver and minerals, with more than 96 per cent of the materials in a mobile phone recoverable.

But they were also not biodegradable and contained substances that could be harmful to the environment.

“I encourage all schools and businesses across Canberra to remind families and staff to gather up old mobile phones laying around the house and drop them off to ACTsmart by Friday for a chance to win $1,000,” Mr Rattenbury said.

All Canberrans can recycle old phones by depositing them at a Mobile Muster location.

For more information on how you can donate or recycle your used mobile phone in the ACT, visit https://www.tccs.act.gov.au/recycling-and-waste.