A drawing of the Zapari proposal. At left is the site of neighbouring town houses.

Another proposal for an apartment complex in Coombs, described by residents as ‘outrageous’, has been sent packing by the planning authority.

Zapari Group had proposed an eight-storey building comprising 212 apartments with basement parking, landscaping and associated works, at Block 3 Section 12, on the corner of John Gorton Drive and Terry Connolly Avenue.

Zapari also sought to change the lease so it could increase the dwelling limit from 44 to 212 – almost five times that allowed when the block was sold.

The refusal comes days after Pod Projects Group’s proposal for its apartment complex on the corner of Arthur Blakely Way and Colbung Street was knocked back, to general acclaim from Molonglo residents.

Zapari’s development application received 145 representations, and the planning authority’s reasons for refusal echoed those given for the Pod Projects proposal.

The development was too big and dense for the site, did not suit the site, would overlook and overshadow neighbours, was sub-standard and would not make a positive contribution to the neighbourhood and the character of the area. 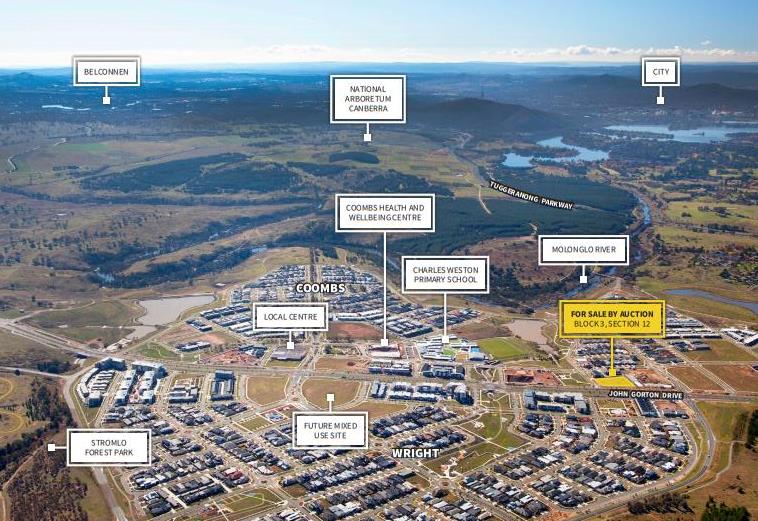 The locator graphic showing the site when it was on the market in February, 2017.

Like the Pod projects proposal, there was also a concern that it could have an adverse effect on the remaining urban development in Molonglo.

It breached many rules of the Multi-Unit Housing Development Code, including those to do with the number of storeys and height, setbacks, and open space, with little room allowed for deep-rooted trees.

Units and balconies were too small, limited to one and two bedrooms and the number of units in the application form conflicted with that shown in the plans.

There was also a shortfall of parking spaces.

“The density, scale and layout also restricts the possibility of achieving a sufficiently high standard of residential amenity that is generally expected on land zoned RZ5 High Density Residential.”

According to the Save Molonglo website, the community is ‘celebrating victory’.

Molonglo community member Ryan Hemsley had expected the Zapari development in Coombs to meet a similar fate as the Pod projects proposal, saying both developers should go back to the drawing board and come back to the community with proposals that actually adhere to the rules.

The decisions are being seen as the planning authority taking a tougher stand on development proposals, and sending a message to developers to lift standards and abide by the planning rules.

I’m all for expanding our city but what they have done to the Molongo Valley is a disaster, it already looks like a slum. Release 350sqm blocks so families have no back yards but then next door zone a 7 storey 200 apartment development. Denman Prospect had so much potential for the views and lifestyle but again just cramming as many apartment blocks in as possible. For the life of me I cannot understand why we are building more and more apartments in the burbs

Andrew Barr will not be happy.

Yes. Any missed opportunity to make some cash for property developers will not make Barr happy.

Gavin Bradley - 6 minutes ago
Mary-Ellen Bradley not us this is only ACT gov View
Kerry Apted - 5 hours ago
excellent! View
Samantha Freeman - 7 hours ago
Tell that to the Federal Govt. No one has moved to a hybrid model, only state Govt View
Opinion 16

Sofia Zivkovic - 12 minutes ago
No point, comp is getting worse each year. View
Tim Mitchell - 7 hours ago
The joint A-Leagues men and women trophy really strengthens Canberra's bid. Would be strange having Canberra as the only team... View
Community 142

Ota Save - 2 hours ago
Sue Sutton No worries Sue. Happy to help ❤️ View
Sue Sutton - 3 hours ago
My Mum has wonderful neighbours who have been helping keep her lawn in check. Thank you Ota and family xx... View
Bill Gemmell - 3 hours ago
Barbara Eglitis I was wondering how long it would take. Seriously, I had the Fowles St Park project in Weston in mind. Sugges... View
News 33

kenbehrens - 3 hours ago
A few years ago when we were visiting our son in Sydney, there were blankets and items of clothing under shelter on the stree... View
jwinston - 3 hours ago
harcm said “tim_c – what a load of rubbish you talk. What if your schooling was completely disrupted by domestic violence... View
Acton - 4 hours ago
The money you are giving out of misplaced guilt to a street beggar is just funding their drug, smokes and/or booze addiction.... View
News 1

ChrisinTurner - 3 hours ago
Living in the inner north we now have to start planning to leave Canberra during SummerNats. Already the mufflers are being r... View
News 20

TimboinOz - 5 hours ago
I am NOT happy that this fundamentalist 'Christian?', bible-inerrancy 'school' exists, at all. That it receives federal and p... View
Breaking 1

@the_riotact @The_RiotACT
#Santa on a flat-bed truck, Basil Fawlty on the stage, a basketball battle, and a picnic for pooches are just some of the things happening in the #capital this week https://t.co/aWkQ2BvTSw (49 minutes ago)