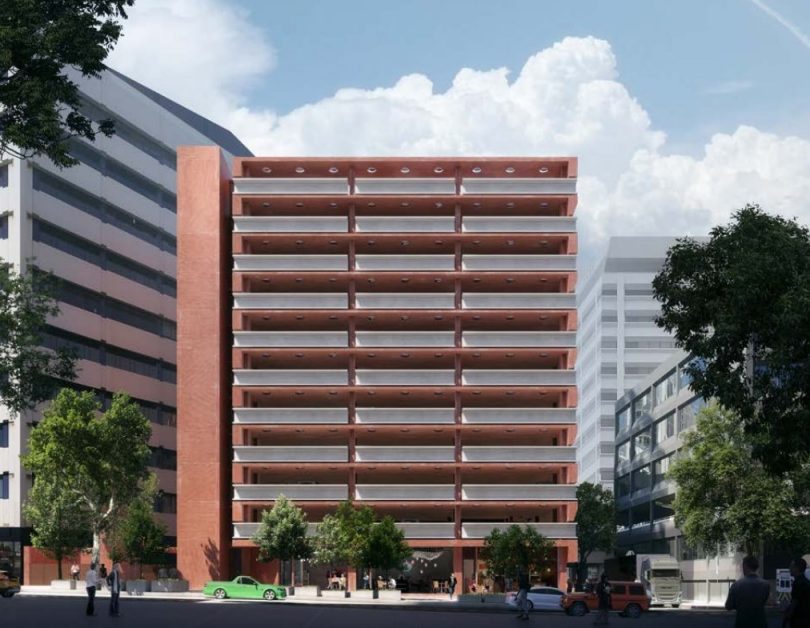 Molonglo Group plans to build an 11-storey car park with ground-floor shops at the eastern end of the city behind London Circuit.

The innovative property and design group has released initial plans as part of public consultation ahead of a development application.

Called Londonside, the 213-space car park will be built on Block 16 Section 12 adjoining an existing 12-storey commercial building, 221 London, which Molonglo owns and has recently upgraded.

A Molonglo spokesperson says Londonside will meet a genuine demand for additional car parking in Canberra’s city centre as urban renewal proceeds, with a proportion to be set aside for tenants at 221 London.

“As inner city land is liberated for other uses, it makes sense that the consequential loss of lavish supplies of street parking needs to be addressed through concentrated parking structures,” the spokesperson said.

“Parking is also a good use of this parcel of land. Due to a lack of access to light and a variety of other factors, such as access for waste disposal, little else can be done with this location.”

Demand for car parking had been a consistent concern for tenants at 221 London in particular, with just 36 parking spaces available for close to 10,000 square metres of office space.

The precise proportions of tenant versus public car parking had not yet been determined, the spokesperson said.

An experienced parking operator will be engaged but no decision has been made at this stage.

“The site is a location surrounded by facilities that serve not only a city-wide but a regional catchment. They include, for example, the Canberra Theatre, Canberra Convention Centre, Commonwealth Park and Stage 88, and many of the visitors to these facilities come from outside Canberra and travel by car,” the spokesperson said.

It will be close to the Snow family’s Constitution Place development, being built on a former surface car park, and not far from the Legislative Assembly and the Canberra Theatre, which will double in size under redevelopment plans, placing extra pressure on nearby parking.

Although the adjacent Constitution Place will have underground parking, it is believed demands from government offices will limit the number of spaces available to the public. 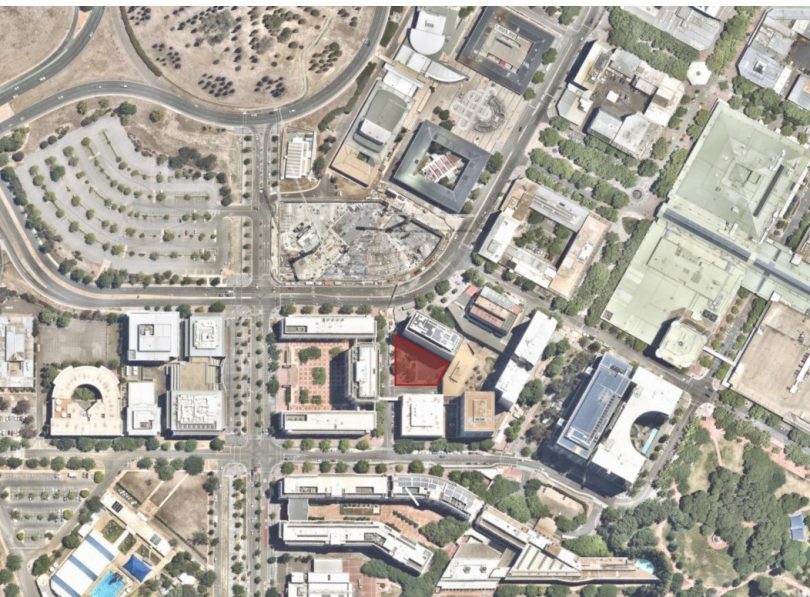 An aerial view of the city centre showing the site in red.

Molonglo says Londonside will also be home to three street food micro-tenancies on the ground floor that will ”bring some life to an otherwise rather sedate city street”.

The Molonglo spokesperson says Londonside will be architecturally significant.

“Most car parks are cheap, drab and thoughtless structures. For some funny reason we permit buildings with such functional uses to behave as though they don’t have a responsibility to our streets, our neighbourhood and our city. But they do,” the spokesperson said.

Londonside has been designed by Angelo Candalepas and his team at Candalepas Associates, well known for their work on the Punchbowl Mosque in Sydney.

“The design is of a concrete structure featuring red patterns reminiscent of a Josef Albers print. Its facade is made of a series of culverts cut in half and joined to create a rhythmic, organic horizontality. This choice of material – culverts, which are commonly used, pre-fabricated products – is beautiful in its efficiency and resourcefulness,” the spokesperson said.

The proposed building is brutally honest about its use, saying there is no trick cladding to hide its function as a car park.

“All buildings shape our cities; not just luxury apartment towers and museums, but bus shelters, newsstands, toilet blocks and car parks. We should not ignore that which is unfashionable. Everything is relevant,” Molonglo says.

It says that the structure may even be adaptable for other use in a future post-car city.

The consultation period runs until 31 January 2020 and submissions can be made to Anita Delle-Vergini at anita@molonglo.com.

Kate Bee - 7 minutes ago
Elizabeth Ann Thurbon I've been here 48 years and the crime rate is one of two significant excellorated changes in recent yea... View
Maya123 - 3 hours ago
Flexibility can be a problem. You get used to a service; maybe even buy a house near it, and then because it is flexible it c... View
HiddenDragon - 3 hours ago
The time remaining for a relatively low stress Canberra might be longer if some of the people who are pushing to make this to... View
Food & Wine 9

Brad Kelly - 1 hour ago
Seriously if they all go the Canberra raiders have depth... yes they will not win a GF and that’s ok 😮 it’s a game ...... View
Maree Hillery - 4 hours ago
Richard Willcoxson pretty soft. Where's their loyalty. View
News 11

Marc Edwards - 2 hours ago
Maybe the Berra Party View
Paul Leins - 2 hours ago
Sure, just bet a former liberal will be a real check to his mates in the liberal party 🙄 View
Michael Ilsley - 2 hours ago
Glad to see him engaged in the community after the tragic loss of his son. View
Community 52

Ian Lindgren - 4 hours ago
Almost every contract in the ACT, and in Australia for that matter, between a recruitment company and a payroll company is a... View
Kevin Hodder - 6 hours ago
How about a crack down on government agencies waisting tax payer funds, View
Property 35

I was driving to work the other morning when an e-scooter rider flew out of a side street in front...
Opinion 69