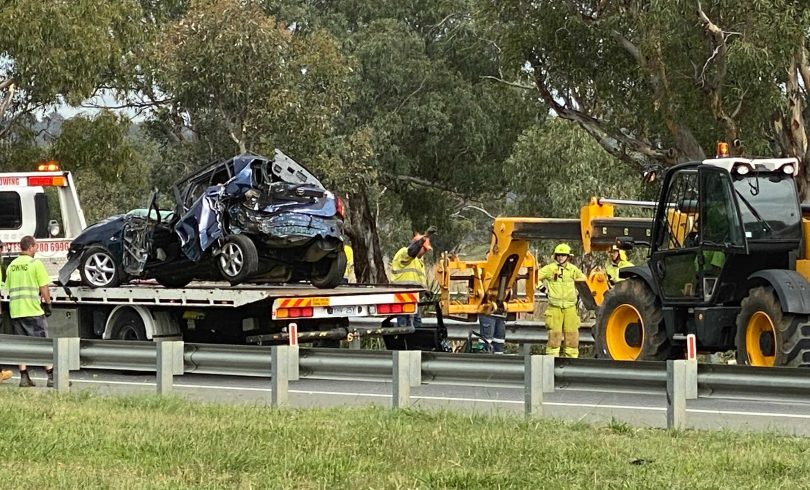 The aftermath of a fatal crash on the Monaro Highway in April 2021. Photo: Region Media.

The Monaro Highway at Hume has once again been named as the worst place for car crashes in the ACT, according to the 2021 AAMI Crash Index.

Afternoons and evenings were the most common times for crashes, which were most likely to be nose-to-tail.

Mondays and Thursdays were the most common days for crashes, with men aged between 35 and 49 the most likely to be involved in them.

The Monaro Highway at Hume is well known as a speeding hotspot, and despite the installation of speed cameras and signage, collisions are still common.

It’s alleged 28-year-old Peter James Loeschnauer was seen driving at speeds of 160km/h moments before the crash, which saw him rear-end a Toyota Corolla being driven by 19-year-old Mr Seary.

Police also allege he was almost four times over the legal driving limit with a blood alcohol level of 0.186, and had MDMA in his system.

According to the AAMI Crash Index, which analysed motor vehicle crash data and insurance claims from July 2020 to June 2021, Fyshwick is also a dangerous place to drive.

Canberra Avenue in Fyshwick came in second place, and the Monaro Highway at Fyshwick, and Newcastle Street at Fyshwick, were ranked equal sixth place.

Other spots where drivers should be paying close attention are Drakeford Drive, Kambah, and Belconnen Way in Belconnen.

Canberra Avenue, Newcastle Street, Drakeford Drive and Monaro Highway have all been listed in previous years.

In the 2020 AAMI Crash Index, top spot was taken out by Canberra Avenue in Fyshwick.

“Many of these roads take commuters to and from the city centre,” she said.

“This means that at any time of the day – but particularly during peak hours – there are a lot of vehicles on the road, requiring drivers to stay alert, drive to the conditions and follow the road rules.

“All it takes is for you to be distracted and take your eyes off the road for a split second for things to go wrong.”

In particular, Ms Cartwright said the Monaro Highway at Hume carries a lot of heavy vehicles and commuter traffic, as well as speed changes, which add a layer of complexity for drivers.

According to ACT Policing data, there have been nine deaths on the ACT’s roads so far in 2021, with seven recorded in 2020.

Statistics for both years are up from six deaths in 2019 despite the impact of COVID-19 lockdowns on road traffic volume.

Most of those roads should have been designed and built or improved to have overpass intersections instead of traffic lights.

Like many roads in Canberra, the NCDC had this in mind in the 1980s, but traffic volumes were not of a level where it was needed when the road was constructed.

I have to dig it out, but I have a brochure detailing a parkway / grade separated road for Monaro Hwy, William Hovell Dr and Ginninderra Dr.

The problem is that no matter what gets built someone will be unhappy. Build it in full in the beginning: “you’re wasting money” or build it like it is now “you’re cutting corners”.