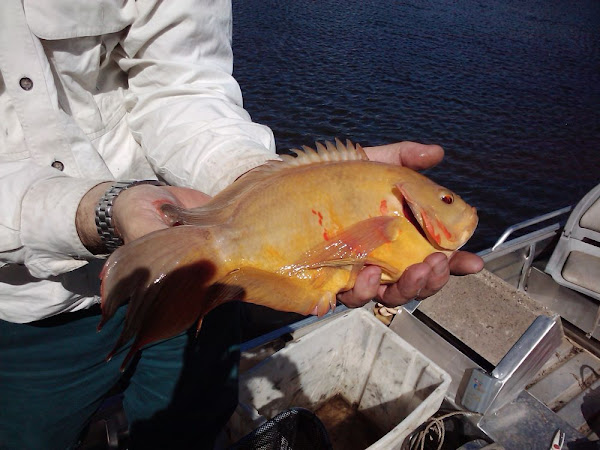 Territory And Municipal Services are letting you know about a 30cm long Oscar found in Gordon Pond.

This in turn has them worried aquarists are not doing the right thing with fish disposal.

“It seems most likely that the Albino Oscar (Astronotus ocellatus) fished out of Gordon Pond was released into Gordon Pond from someone’s home aquarium over the summer,” Ms Lane said.

“Oscars are aggressive tropical fish from the Amazon and are popular aquarium fish. In the right environment, they can grow to 45cm long and in the wild will feed on a diversity of fish, shrimps and other aquatic animals.

“This means that although it is unlikely the Oscar would have survived in the pond during Canberra’s winter, the potential for this exotic fish to impact on native species and our waterways is significant.”

Some exotic species, such as Tilapia, infesting Australian waterways have been found to have increased their tolerance for cold temperature waters since becoming established in the wild.

Exotic fish predate native species, competing for food and space. They can alter the habitat and harbour new diseases.

Ms Lane said the release of aquarium fish, dead or alive, into public waterways was illegal under the Fisheries Act 2000 and the Nature Conservation Act 1980.

“Appropriate disposal of unwanted fish is very important for the conservation of our waterways,” Ms Lane said.

“People can return fish to the retailer or if it is sick they can dispose of it humanely by immersing the fish in an ice slurry – a mix of half ice and half water – for 20 minutes and then disposing the carcass in the garbage in a plastic bag.”

The public is encouraged to report unusual fish species to Canberra Connect on 13 22 81. 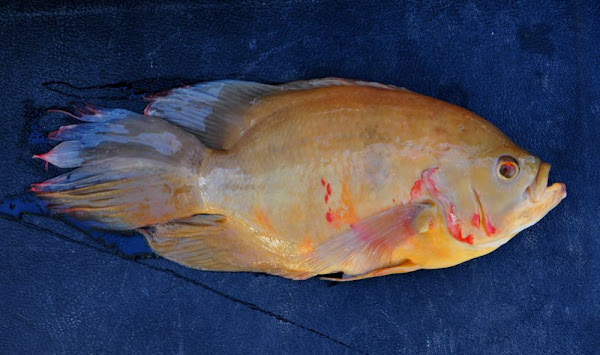 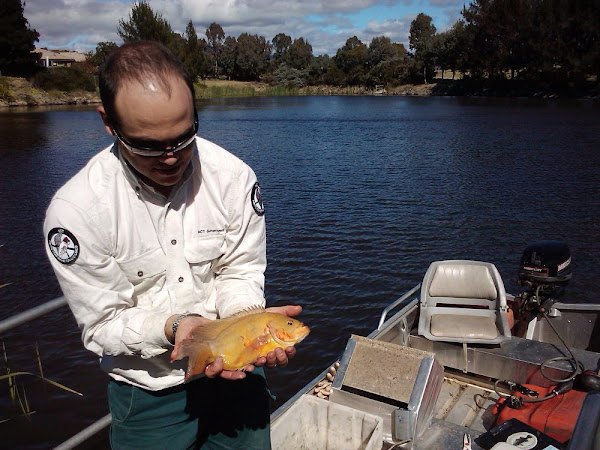 pests in tuggers competing for food and space, and altering a habitat to the communities detriment and harbouring new diseases. What is else is new down there?

Are they edible? Problem solved?

Oscars are very tough and it is wishful thinking to imagine that they could not survive winter in our lakes. When I was a uni student, a group house I visited had a rank fishtank with no heating, no lights and covered in slime. It was half full of water in an unheated room. In it lived – ‘Oscar’, who survived on the occasional bit of fish food every few days when someone remembered to feed him/her.

Oscar’s solitary lifestyle was because every other fish in the tank had been killed and eaten by you-know-who.

Oh, and that’s not a monster. They can easily grow to 45cm.

Oscars are very tough and it is wishful thinking to imagine that they could not survive winter in our lakes. When I was a uni student, a group house I visited had a rank fishtank with no heating, no lights and covered in slime. It was half full of water in an unheated room. In it lived – ‘Oscar’, who survived on the occasional bit of fish food every few days when someone remembered to feed him/her.

Oscar’s solitary lifestyle was because every other fish in the tank had been killed and eaten by you-know-who.

So – did Territory And Municipal dispose of the Oscar humanely? It’s suffocating in the trophy shots but still alive.

How do they taste?

How does one apply for a job in TAMS, where part of the job description involves fishing the various ponds/lakes around our fair city?

tough job but someone has to do it 🙂

How does one apply for a job in TAMS, where part of the job description involves fishing the various ponds/lakes around our fair city?

how stupid can people be?

Lynn Gill - 10 minutes ago
More like the Village Idiot than the "Entertainer". View
Jules Anne - 3 hours ago
Ugh. Still a disrespectful, entitled and whining tantrum throwing brat. Has no consideration, etiquette or manners and makes... View
Lucy Humphreys - 4 hours ago
Jennifer Manson then I'd say tennis is not for you View
News 193

Joe Condi - 35 minutes ago
So does this mean - that if someone earns less, we should reduce the cost of living? Wake up View
Marc Edwards - 51 minutes ago
Ok I can agree on the Government Fees and charges, only where the $figure stay where they are and reduce for those who are le... View
Ray Vallely - 9 hours ago
So, the less money you earn means the less money you pay in fines for speeding? Yeah, that makes sense. Who dreams up these i... View
Community 36

Yvonne Daintry - 45 minutes ago
Eucalyptus trees are most unsuitable to be grown in suburban areas .They are dangerous with a deserved reputation for droppin... View
Sarah Kristine - 9 hours ago
Or perhaps, suburbia doesn’t belong here View
Shaun Rivera - 10 hours ago
Zoe Lewer yep if we all lived in humpys that would solve the problems View
Public Sector 15

Lara Zangl - 1 hour ago
Lol, who listens to the APS commission? They are so out of touch... View
Lifestyle 1

Kalo Arepo - 2 hours ago
I'm one of those lucky people who no matter how much they eat or drink never put on weight -I think it's because of a very hi... View
News 2

Acton - 2 hours ago
Kids and teachers should return to school. Yes, some will get Covid and have to stay home with the sniffles. So what. The edu... View
Public Sector 2

Boweavil Kat - 7 hours ago
From what I can see, they don’t do anything anymore while treating those that need the service like criminals trying to con... View
News 8

Aditi Verma - 9 hours ago
This is the lunch place in Dickson with the amazing pasta I was telling you about Akshata Giri 😭 View
Clare Lee Gerhardt - 9 hours ago
What!! I love your coffees! View
Community 5

limestonecowboy - 9 hours ago
All Canberrans owe Ian Batterham a huge debt of gratitude for his work on rescuing Marion Mahoney Griffin's beautiful renderi... View
Tania Riviere - 12 hours ago
…. and one of the best guys ever View
News 24

Jimbo Lambert - 9 hours ago
Laurie Berry I would love to read the lawn mowing contract to see if it has intentionally cut back on frequency/extent of mow... View
Rick Robins - 13 hours ago
Laurie Berry it's all ok, Canberra has a tram instead of basic services! View
show more show less
*Results are based on activity within last 7 days

@the_riotact @The_RiotACT
The #Wiggles took out #TripleJ's Hottest 100 this year. Is this evidence that the list has been hijacked by jokesters? That our #music tastes have changed? That indie music is one the wane? Or is 32-year-old Zoya Patel being too nostalgic? https://t.co/4hDw79laqh (1 hour ago)

@the_riotact @The_RiotACT
The call has gone out for local and regional #producers and specialist eateries to be part of the Capital Food #Market which is due to open early in 2023. Find out how you get get a foot in the door of this amazing new development https://t.co/3Khy0wmSEn (11 hours ago)

@the_riotact @The_RiotACT
Weber it's Australia Day or not, there's a good chance David Cole is firing up the #BBQ. Sally Hopman lifts the lid on his unique collection https://t.co/QVT9uRA5zw (12 hours ago)