More bins and seats across Canberra

“Based on the asset condition audit undertaken in 2012, priority sites will receive a combination of new seats, benches, picnic settings and bins. The new street furniture has been designed to be more robust and accessible for all ages and, where possible, will complement the colours of existing furniture in the area.

“In addition, new 240 litre bins will replace some of the existing 120 litre bins at eight of the 13 sites. Some of the smaller bins may be removed and not replaced due to the increased capacity of larger, nearby bins.” 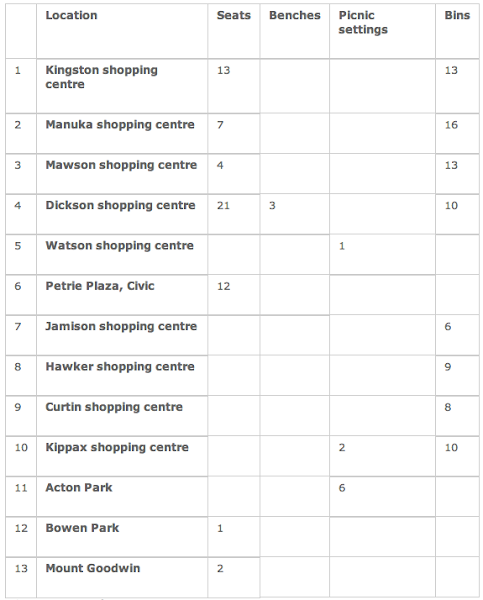 They forgot about Florey. 3 bins for the 17 shops, doctors surgery, and 5 or 6 offices.

What about recycling bins? We need more, it’s ridiculous that there are none between ANU and Northbourne Ave. At least plonk one on the corner near Canberra House where the park attracts workers eating at lunch time.

What goes around …….but no mention of Woden . I can remember in Woden after self guvy came in, the bins were removed near the Furzer street offices, then a little later a bloke with a sledge hammer busted up the plinths so it could be easily removed as well.

Darron Marks - 32 minutes ago
"But in this world nothing can be said to be certain, except death and taxes" View
Alex Elliott - 6 hours ago
The ACT has many interstate cars using the roads. How does the Government propose to tax these or apply a levy to them so tha... View
News 4

Bill Gemmell - 1 hour ago
Additional well-located transport infrastructure is a plus. However, maybe they should be thinking about covering these with... View
Greg Batten - 4 hours ago
Great idea for both ACT light rail and bus networks. View
Ashley Wright - 5 hours ago
Justin Watson it is, the article has that a bit wrong as the “new” stop is at Sandford Street intersection about 1km away... View
Opinion 9

Giles Tranter - 1 hour ago
We're both talking about Christianity here, right? View
Luke Felton - 3 hours ago
So OP suggests that the alleged actions of a very very small minority is a reflection of the institution blah blah. Yet, the... View
Dave Ryan - 4 hours ago
Steve Ross sooo.... your opinion is the best, then? OK. Answers my question about whether the rest of us are allowed to talk... View
Opinion 19

Julie Macklin - 3 hours ago
Many other countries don't have the unpopulated distances that we do. It's a different matter driving an electric car in Euro... View
Alex Elliott - 6 hours ago
Other countries have taxed petrol engine cars to encourage the uptake of electric vehicles which has resulted in their prices... View
What's On 8

Martyn O'Connell - 4 hours ago
the 333 bus painted up to look like the XPT View
Katy Did - 6 hours ago
I loved that tram when I worked in Civic View
Karean Vaughan - 7 hours ago
I remember catching it at lunchtime, opposite the School of Music back then. A very convenient way to get to Civic centre . View
Opinion 52

Matthew Windebank - 7 hours ago
That photo explains everything. When works are underway with a reduced speed limit you are supposed to 'bag' or cover the exi... View
Property 11

Adrian Evans - 11 hours ago
All the best GT. Look forward to more day at the cricket together View
Community 44

A passenger on the repatriation flight that arrived in Canberra on Thursday has tested positive for COVID-19, ACT Health said...
Opinion 20

Negotiations over pay and conditions which could avert strike action are continuing between garbage collection company Suez and the drivers'...
Opinion 52

@The_RiotACT @The_RiotACT
Peter Papathanasiou's book about Greek families and secrets is heading for the small screen, with funding for developing the Canberra story https://t.co/UsxVpYrO2R (4 hours ago)

@The_RiotACT @The_RiotACT
Hot in the City: Asian Taste is bringing the flavours of Malaysia's fusion cuisine to Mawson https://t.co/BfapEQ6dPs (5 hours ago)