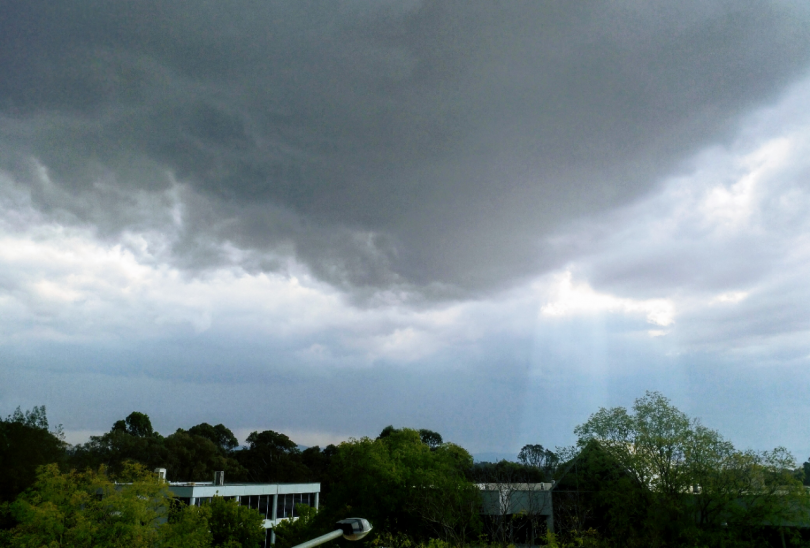 The forecast is in, with meteorologists predicting Canberra and the surrounding region could get as much as 100 mm of rain between Wednesday (4 March) and the weekend.

The entire eastern half of Australia will see rainfall from the remnants of Tropical Cyclone Esther which will move further east and south, causing widespread showers, thunderstorms and areas of heavy rain in the ACT, NSW, Queensland and Victoria.

Weatherzone forecaster Ben Domensino said a mass of tropical moisture will pass over central and south-eastern Australia this week, causing widespread rain and thunderstorms in multiple states and territories, including a large swathe of the Murray-Darling Basin.

“Moisture associated with ex-Tropical Cyclone Esther will be carried towards south-eastern Australia during the coming days by jet stream winds flowing high above Australia.

“This plume of moisture-laden air will interact with a broad trough of low pressure, generating rain and storms on multiple days along a corridor stretching from the Kimberley down to eastern Victoria,” Mr Domensino said.

Some places could see more than 100 mm from this system, particularly those directly impacted by thunderstorms.

There is forecast to be good follow-up rain in the ACT this week courtesy of ex-tropical cyclone Esther. The map shows the total forecast rain for the next 8 days, with the ACT currently in just the right spot.
ACT forecast: https://t.co/s29iKt7xPm pic.twitter.com/IlELbkr36U

The Bureau of Meteorology forecast says there is almost a 100 per cent chance of between 30 and 50 mm of rain falling in Canberra on Wednesday. A further 20 to 35 mm could fall on Thursday, with a high chance of further follow-up showers on Friday and into the weekend.

Despite good rain for some areas in February, summer rainfall across Australia was below average.

Dr Watkins said this resulted in both the warmest and driest December on record, with significant fire weather throughout many parts of the country.

“In January, we saw those two drivers return to neutral levels, plus a very late arrival of the northern monsoon which finally brought tropical moisture to the continent,” Dr Watkins said.

“As we often see once the monsoon arrives in the north, some of that tropical moisture was dragged south, leading to some of the good recent rainfall over the country’s east.

“The rainfall helped contain many of the long-lived bushfires in the east and helped ease drought conditions in some locations. But many inland regions experienced only patchy rainfall and we still need to see sustained rainfall to relieve drought in many areas.”

The forecast for rain along the south-east of NSW is slightly less than in Canberra.

At Batemans Bay there is a very high chance of between 25 and 45 mm of rain on Wednesday, with up to 25 mm on Thursday. Light rain is also forecast for Friday and later in the day on Saturday when the sold-out Red Hot Summer Tour comes to town.

Similar rainfall totals are forecast to the south between Bega and Eden.

No flood warnings have been issued, although further rainfall will top up the area’s creeks and dams.

The only flood warnings for the Warrego and Paroo rivers in south-western Queensland. These rivers feed into the Murray-Darling catchment. Areas of western NSW that have been in drought will also see their first significant rain during the next week.

Hope you actually get some rain ☔️ x

Hope we get it!

I’ll believe it when I see it too. Maybe we should all do a load of washing, water the garden and wash the car! 👍 That might encourage it.

And wash the floors,it will come then for sure

Anyone else notice that the BOM radar time at the bottom of the screen shows as 12 hours earlier? Is the radar reading 12 hours old or is the the clock wrong?

The clock is showing UTC not AEDT.

The article says “ The Bureau of Meteorology forecast says there is almost a 100 per cent chance of between 30 and 50 mm of rain falling in Canberra on Wednesday.”

That is not actually what the BOM forecast says. What it says is there will be a 10% chance of rain. And that rain could at some location in Canberra be between 30-50mm.

Funnily I thought you had an article recently (or it may have been the CT or the ABC) that explained the fact that the chance of rain and the predicted rainfall were two seperate but related things.

Anyway either way hope it is a nice bit of soaking rain that gets further into the ground and water supply than the last big dump did.

Malcolm Roxburgh - 8 minutes ago
The government has to release more land not make it easier to raid your super. This only makes for more cashed up buyers and... View
assiduous - 10 hours ago
Low lending standards and inflated bonuses for originating mortgages based on ever rising values are core features of our ban... View
Pradeep Bishwakarma - 11 hours ago
Crazy market Shiva Sapkota! Only the RBA Can fix this View
Opinion 80

Ronnie Adams - 41 minutes ago
Helicopter 🚁 View
Julie Macklin - 19 hours ago
I cycled and rarely had to face the parking problems people complained about. When it rained I took the bus, even though I ha... View
Maya123 - 19 hours ago
We had flexitime and we had clocks, do there was no way someone could cheat on their hours. Whether the individual actually w... View
Breaking 2

chewy14 - 24 hours ago
I think it's unfair that people who work more years than I do, in jobs that pay more than mine does, end up having more money... View
show more show less
*Results are based on activity within last 7 days