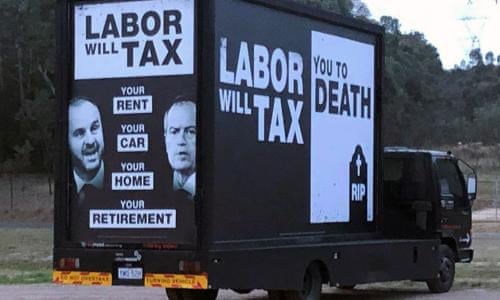 The Liberals’ tax truck with Andrew Barr’s face on the back. Plenty of mileage left in this one.

ACT Labor may have bucked the Federal trend to bathe the territory in red, but the Canberra Liberals can take heart from Senator Zed Seselja’s repelling of challenges from the Greens and Anthony Pesec, but more importantly from the ruthlessly simple and highly effective Morrison campaign.

No doubt it will be the blueprint for next year’s ACT poll, and indeed the ‘tax truck’ has already been rolled out as part of the Federal campaign and will be a prominent prop in 2020.

Public transport will also likely be a focal point with the $1.6 billion cost of light rail Stage 2 to Woden feeding into the rates debate, as well as what will be simmering discontent about the new bus network.

The federal campaign was almost a dry run for 2020, with the central theme of tax attempting to exploit ratepayer unease about rate rises under the Barr Government.

We can expect a full throttle attack on Andrew Barr’s 20-year tax reforms that have seen residential rates soar since 2012, with the trade-off being the winding back of inefficient taxes such as stamp duty.

However the rate of that windback doesn’t appear to have matched the pace of rate rises, and ratepayer perceptions are based more on their rates notices than the less visible benefits.

Every economist in the land might commend Mr Barr for recalibrating the tax system to provide a firmer financial footing for the Territory but the Liberals will be telling Canberrans we told you so, harking back to the Seselja-led campaign in 2012.

They will also put a target on Mr Barr, emulating the Kill Bill tactics of the federal party. Slippery, untrustworthy and a liar is the kind of language that he will continue to face. As Scott Morrison said almost cheerily of Bill Shorten during the campaign, “He lies all the time.”

But Mr Barr won’t be going anywhere, now vowing to stay on as Chief Minister after previous suggestions that he might move on.

Whether he faces Opposition Leader Alistair Coe is debatable because the other lesson from the election result is the value of having a leader who can sell the message clearly and believably. Former radio man Mark Parton might be a better fit for the role.

With Federal Labor still on the outer, so too may be light rail Stage 2. No promised $200 million from Bill Shorten and the Commonwealth approvals process now becomes decidedly thorny.

Senator Seselja may not have been unable to wield enough influence to protect Public Service jobs but with an ACT election looming and the local Liberals needing a campaign plank to underline its rates campaign, we may see fresh Commonwealth concerns about the environment and heritage of the Parliamentary Zone even with the new more direct route via State Circle, or about the lake crossing at Commonwealth Avenue, which always raised eyebrows on the Hill.

Indeed Mr Barr has already flagged the project may now be delayed.

Stage 1 may be built and seemingly popular with Canberrans but that won’t stop the Liberals, which have never accepted the project, saying the ACT can’t afford Stage 1 and offering rates relief to ratepayers.

But like the Prime Minister, Mr Coe, or Mr Parton, will be sure not to complicate matters by talking much about how his party will actually manage the Territory’s finances, just that your rates bill will be lower.

Nor will there be too much detail about how the Liberals will fix the bus network, or hospitals, or schools.

The message will be simple, if simplistic – Labor is taxing you to death, it’s bungled the buses, can’t manage our hospitals, is failing our schools and stopping you from being able to buy a free-standing house.

And the Greens’ and their obsession with climate change means you will pay more for energy.

With no truth in advertising rules and an all’s fair in love, war and elections attitude, the campaign will be overwhelmingly negative, and may be repaid in kind by Labor.

With the Morrison campaign redefining how elections should be fought, the 2020 ACT election looms as an ugly affair.

It’s still a Labor town and a very different electorate to the rest of Australia, and Mr Barr and his team will be favoured to prevail, but as Katy Gallagher said on Saturday night the party should not take Canberra for granted.

Rebecca Vassarotti - 5 hours ago
Emma Davidson Yep, definitely different. My fav Termo memory, was the afterparty from a Violet Femmes concert and for Gypsy (... View
Community 19

Chief Minister Andrew Barr read the Real Estate Institute (REIA) the riot act after accusing its principal association of not...

@The_RiotACT @The_RiotACT
Canberra property developers say that construction is a vital engine for the ACT economy and must keep rolling. They told Region Media that rates and land tax relief would make a significant difference at a time when sales enquiries have evaporated https://t.co/MmdApxpqnB (22 minutes ago)