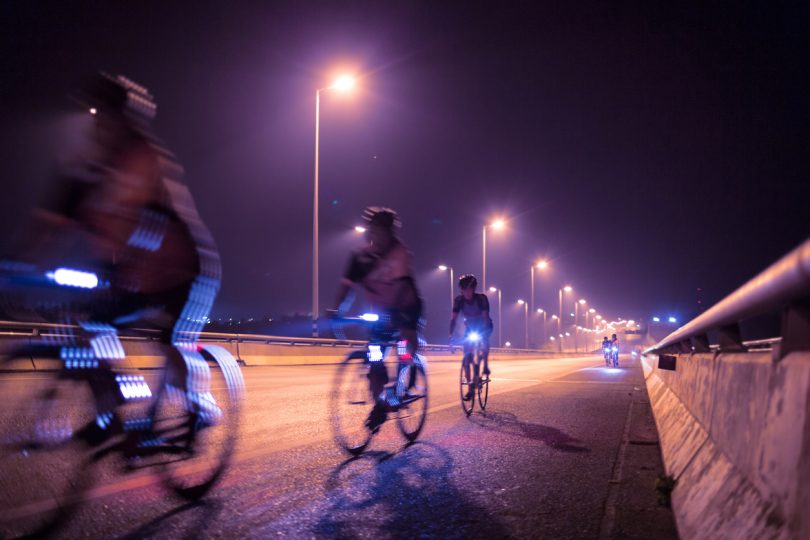 Nearly 90 per cent of drivers on roads with a speed limit above 60km/h kept the required 1.5 metres when passing a cyclist on the road. File photo.

A new report reveals the majority of ACT drivers obey the minimum passing rules when overtaking cyclists on the road after the passing distance between over 16,000 overtaking vehicles and cyclists was recorded during a four week period in 2018.

An ACT Government study into cyclists passing distances in the territory followed 23 volunteer cyclists across 6,531 kilometres and 272 hours of riding, recording the distance between cyclists and passing vehicles 16,476 times.

The study, which was undertaken by the University of Adelaide’s Centre for Automotive Safety Research, found that overall ACT drivers were generally compliant with the minimum passing rules, otherwise known as the metre matters, with 97.3 per cent of motorists keeping a one-metre distance when the speed limit was below 60 kilometres an hour.

According to ACT Minister for Road Safety Shane Rattenbury, 88.8 per cent of drivers on roads with a speed limit above 60 kilometres an hour obeyed the required 1.5 metres when passing a cyclist on the road.

The ACT’s minimum passing laws were introduced in 2015 on a trial basis and were permanently implemented last year, as a measure to increase protection of cyclists on our roads.

To provide this distance on narrow roads, motorists are allowed to cross or straddle the centre lines, provided the driver has a clear view of any approaching traffic and that it is safe to do so. If it is not safe to pass, drivers must wait behind the cyclist until the road conditions change.

Drivers who fail to comply with this rule can receive a $292 fine and two demerit points.

Mr Rattenbury said the study’s results showed the effectiveness of the new law.

“This has been a really important reform in the ACT for creating the space for cyclists,” Mr Rattenbury said. “I have been really encouraged as a cyclist on the road by how motorists have taken ‘the metre matters’ rule.

“I have a sense that people can relate to this rule and they understand what it is and get the idea of how much space you need to leave for a cyclist. The data has backed that up.

“The results from this study proves the value in ACT’s minimum passing rules, with the majority of motorists providing safe overtaking space to cyclists sharing our roads.

“However, there were occasions where passing events were detected at very close distances, of less than half a metre, which is incredibly dangerous. We all need to commit to making our roads a much safer place for all road users.”

According to the study, while most cyclists had indicated they felt safe when they ride their bike, they also acknowledged feeling unsafe at times, especially on narrow roads with no shoulder or verge, roads without bike lanes, roads with high traffic volumes, in situations where aggressive drivers are deliberately being intimidating, and when cars pass too closely.

When asked if there were particular types of vehicles that regularly pass too close, buses were regarded as most problematic, followed by trucks or large vehicles, and trade workers/utility drivers.

Mr Rattenbury said the ACT Government would continue to promote the minimum passing rules, including installing signage on our roads to remind motorists of the relevant passing distance for the location.

“I also want to remind drivers that on narrow roads or roads with narrow lanes, they are permitted to cross centre lines, straddle lane-lines and drive on painted islands, to provide the required passing distance,” he said.

“Please do obey these rules. They are really important and we need to lift our game a little bit more because we need 100 per cent compliance on this.

“All it takes is one small mistake and it can have very serious consequences.”

All for making cycling safer. Can we get a law passed that unless there is a designated bike lane or shoulder on roads 80km/h or higher cyclist cannot ride unless they have a trailing safety car with signage and lights.

If you think it’s that dangerous, maybe the speed limit should be dropped. That should make it safer from drivers who can’t handle those speeds and worry about their ability to miss people on bicycles.

If the cyclists weren’t doing 20km/h on blind 100km/h corners there wouldn’t be a problem. Maybe they need to stop being so lazy and peddle harder to do the posted speed limit.

Then slow down and drive to your abilities.

What were the stats before the law?

So around 10% of Canberra drivers don’t give a rats about cyclist safety! Considering the number of cyclists I would be expecting to see some decisive action. Alas, this will not happen because the government hasn’t really got the fortitude to address the issue and our finest think issuing media releases equates to taking action.

I’m glad that’s the case. I always make sure I give cyclists room, and when I’m cycling, 99.99% of drivers do the same. Well done Canberra!

How about they use the bike paths that the government spent millions on instead of using the roads.

John Heffernan ‘they’ do… and the roads, as legally allowed.

John Heffernan time to acquaint yourself with road rule 15(b).

Unfortunately a lot of people display ignorance about shared paths (the ACT doesn’t have any ‘bike’ paths). There are many places shared paths don’t exist.

Interesting. This matches my experience as a cyclist.

Depends what road… some of them are getting very narrow!!

The ultra-sonic sensor set up.

David Riddel has it been certified as accurate. Not being a pain, just interested. Wonder how it would go in evidence

Russ James – yes, the University knows what it is doing. The difference of the speed of sound due to temperature is about 6% over 30c. The sensor detects the reflected pressure wave (sound), which I’d suggest, is most probably from the vehicle side, rather than a side mirror—so I expect that a number that we’re ‘close’ would in fact have been ‘very close’ taking in account the mirror.

5cm resolution, but measured in calibration to 3cm difference. The report details…

However, this technology usually measures to the car panel, so reduce all measurements by about 0.1 metres.

Pedestrians need something like this fitted to a backpack to warn when a cyclist is approaching at high speed from behind.

Guy David – I don’t understand the question. Irrespective of where the bike is, the MPD remains the same—in a bike lane, on the fog line, in the traffic lane… If there is insufficient room for a driver to provide MPD, then it’s an illegal pass.
The timing difference between the two sensors determines if the car/truck passes the bike (MPD applies), or vice-versa (MPD doesn’t apply). Additionally, GPS is used to determine if the bike is stationary.

Already not legal unless one is passing another two.

Christopher Stuart Veilands how about we make a law that motorists must understand ‘abreast’ and parallex error.

Christopher Stuart Veilands but with no form or rego on bikes how do you ever fine them unless the cop is there.

Lauryn Roberts exactly the same way you fine a motorist without a cop there.

Oh, please advise your success in reporting just the number plates of scofflaw motorists that have resulted in fines issued.