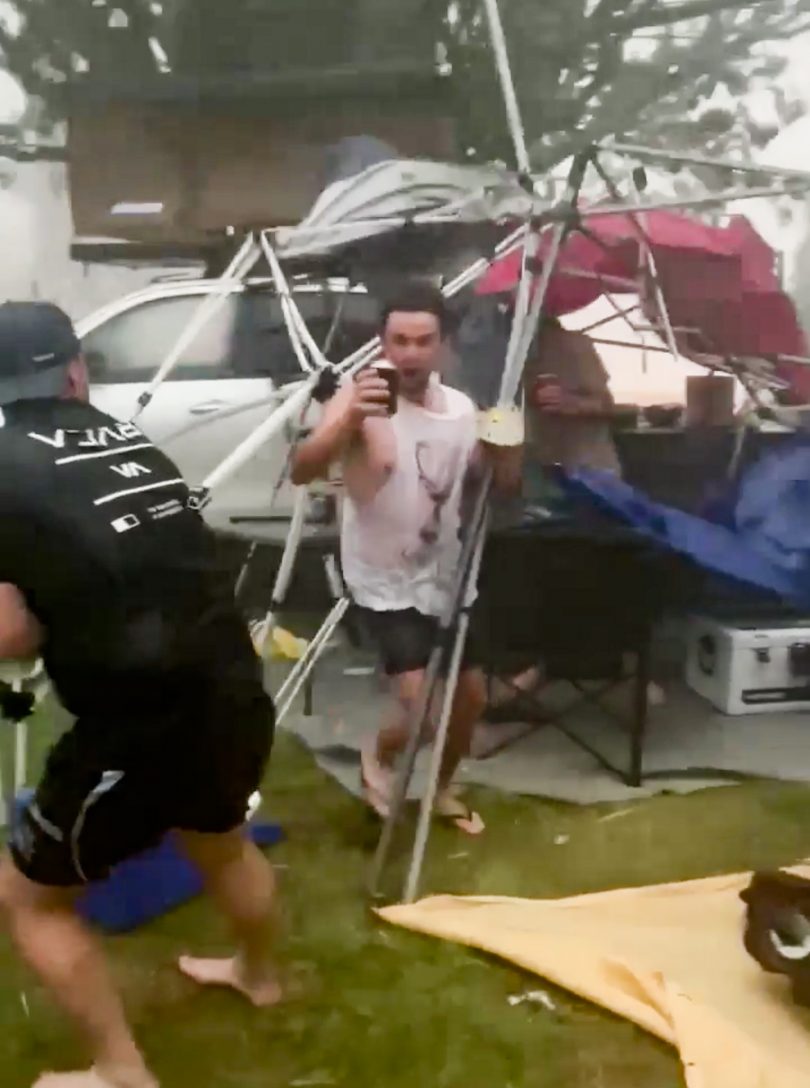 Conditions quickly worsened and it wasn’t long before they were fighting a losing fight against mother nature. Photo: Screenshot.

It’s been dubbed by some the ‘most Australian video ever’.

As wild storms wreaked havoc across NSW and the ACT on Saturday, there were plenty of people across the region trapped in precarious positions, including a group of campers in Good Hope, just outside Yass.

“We just managed to get in and cooked up a bit of dinner, and then we got a couple of Snapchats from mates back in Canberra, and we looked over the hill and we could see it brewing just over the hill,” said one of the campers, Bradley Griffiths.

“We bunkered down a little bit and packed a few things away. We thought it wasn’t going to last real long, and we’re sitting there, and you can see it just roaring across the water, almost picking the water up, I suppose, and we went, ‘we’re in a bit of trouble here’.”

What followed next was caught on video and can be watched in the now-viral video below.

Hold my beer! A group of Aussie campers braved the recent thunderstorm beer-in-hand at Good Hope near Yass. However, it wasn't enough to stop them from having a good time.Video submitted by Andrew Durham.

The boys arrived at their campsite on Friday (17 December) for their work Christmas party. They planned to share a few beers and enjoy a water ski.

“I suppose coming around on Saturday, it was fairly windy all day, and it dropped off there in the afternoon. We got the boat out and did a bit in the boat, and the rest of the other boys had all been drinking fairly early obviously, seeming as they were there for the Christmas party,” said Bradley.

Conditions quickly worsened and it wasn’t long before they were fighting a losing fight against mother nature.

“We all jumped up and grabbed a hold of the gazebos, and a big gust folded the gazebos onto us and smashed the mirror on the ute, so we were all holding on to try to save what we could, but obviously it was bucketing down rain as well,” said Bradley.

“When it all cleared, we were about ankle deep in water.”

Packed into the cars, soaking wet and looking out at what was once their campsite, the boys decided to make the most out of the experience. 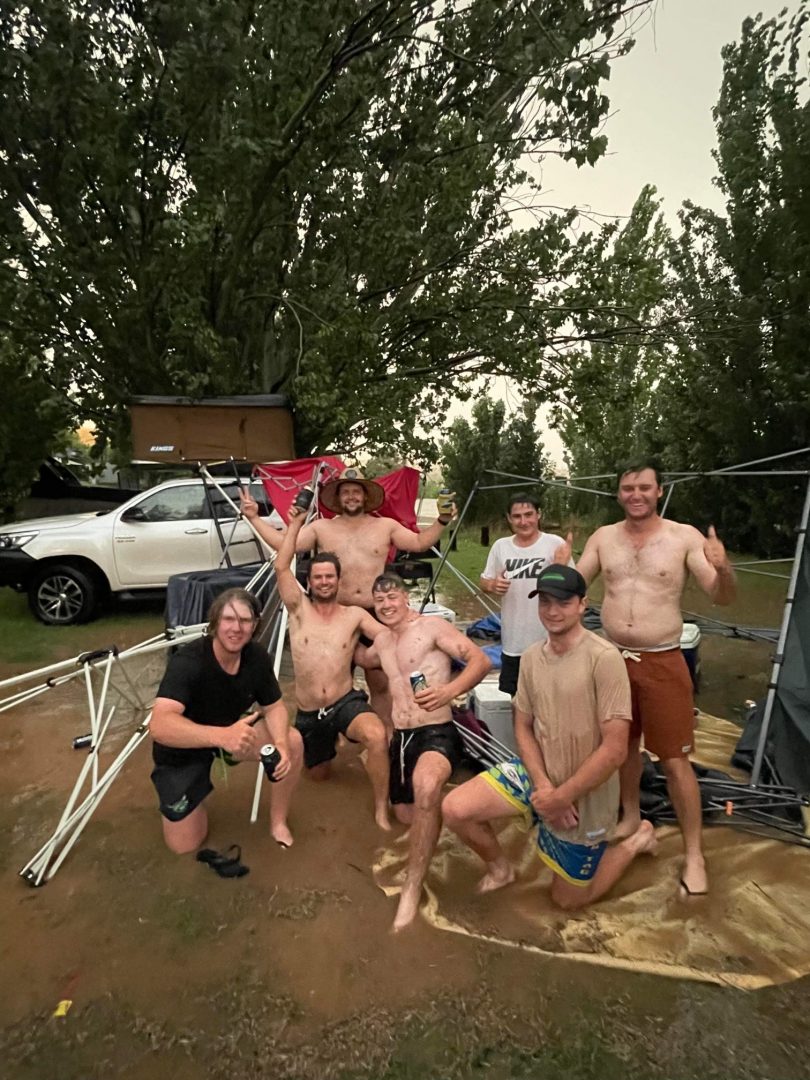 “Obviously, what had happened, had happened. So, in good spirits, we got the surfboard out and did a bit of water skimming across our campsite, finally got a fire going as well to warm ourselves up and admire the destruction, I suppose,” said Bradley.

“We obviously tied up all the loose things and that, but the gazebos stayed as they were for the night and we just kept the party rolling.”

Despite what some would describe as a horror experience, Bradley claims it’s all “a part of the adventure” and that the boys would hardly be scared off going camping again sometime soon.

“My whole life I’ve been going out to that particular spot, and that’s the worst storm I’ve ever seen. I think everyone got a bit of a shock after it, but no, we’ll all be back into it,” he said.

Since being posted on The Canberra Page, the video has amassed over 140,000 views, 4700 reactions and 2800 comments, many of which noted the danger of holding metal rods during a storm.

LOL…man (and his beer) against nature..

Eucalyptus Melliodora Reminds me of camping in Ireland!

David Hunter check out the video

Cindy Campbell Nigel Palfreman Ben McMillan I feel like this would have been us if we weren’t in the pub during the storm in Gundagai!

Absolute kings. in face of adversity we have a beer and brave it

Emma flashbacks to our family camping trips where it ALWAYS rained. Always.

John Bit of rain and wind. It’ll be OK.

Brett Quinn something to aspire to on your next trip.

Preston Michael Andrew Humphrys was this you guys??

Paul Dwyer close but not quite that bad

KB Butchwiz still worth it 😅

Steve Laura Good place to get caught in a storm right? 😆