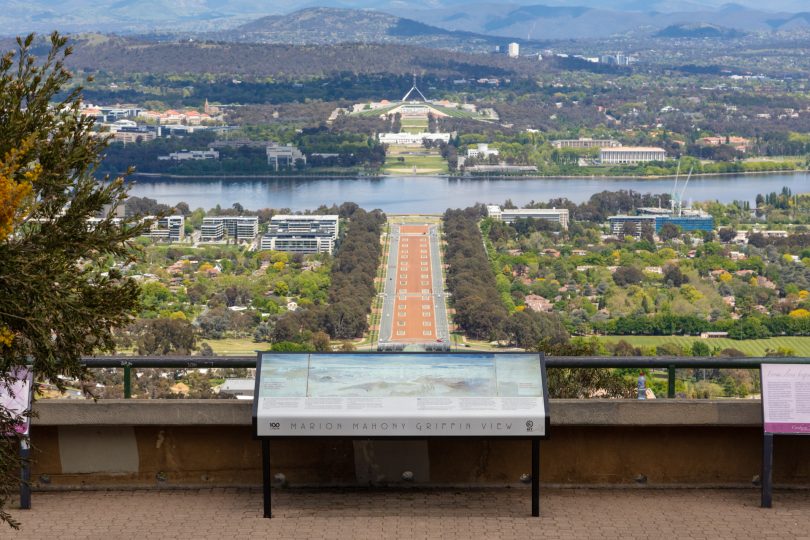 It’s not difficult to see why Mount Ainslie is a popular lookout. Photo: Michelle Kroll.

Mount Ainslie is loved by many – hundreds every day, in fact – who traverse its trail to the summit for fitness or to draw in the beauty of the city’s panorama.

COVID lockdowns have highlighted to many of us how much we relish our open spaces and our parks and reserves. There are 39 locations of Canberra Nature Park within the ACT, and Mount Ainslie is one of these.

Regarded as the “women’s mountain” (along with Mount Majura because the two mountains resemble women’s breasts), Mount Ainslie plays an important role in local Aboriginal culture. It is here that for millennia, “secret women’s business” has taken place. Mount Ainslie is significant for Aboriginal people, with up to 31 known Aboriginal heritage sites of cultural and archaeological significance.

A key feature in the design of Canberra, Mount Ainslie was the start of Walter Burley Griffin’s land axis. Today, an aircraft beacon casts light from the top, safely guiding flights into the capital.

Mount Ainslie is named after James Ainslie, an employee of businessman and merchant Robert Campbell.

In 1825, Campbell tasked Ainslie with bringing 700 sheep onto the Limestone Plains to determine the suitability of establishing a pastoral property. Ainslie met and formed a relationship with an Aboriginal woman who showed him good grazing ground near Pialligo. The property Campbell subsequently established nearby was called ‘Duntroon’, after Campbell’s ancestral home in Scotland.

James Ainslie played a significant role in the European settlement of the Limestone Plains. He helped develop Duntroon and expanded the sheep flock significantly over the next few years. He also took part in the capture of bushranger John Tennant after whom Mount Tennant in Namadgi National Park is named.

Tennant, an assigned convict, had absconded into the bush and hid on the mountain. He committed a number of robberies until he was apprehended by Ainslie and two others and was then sentenced to the penal colony on Norfolk Island. Much of Tennant’s booty is believed to remain hidden within the mountain, perhaps a treasure trove still to be found.

Workmen’s camps were located on the slopes of Mount Ainslie between 1909 and 1930 as the city was beginning to be developed. One such camp was located near the corner of Ebden and Chisholm Streets. 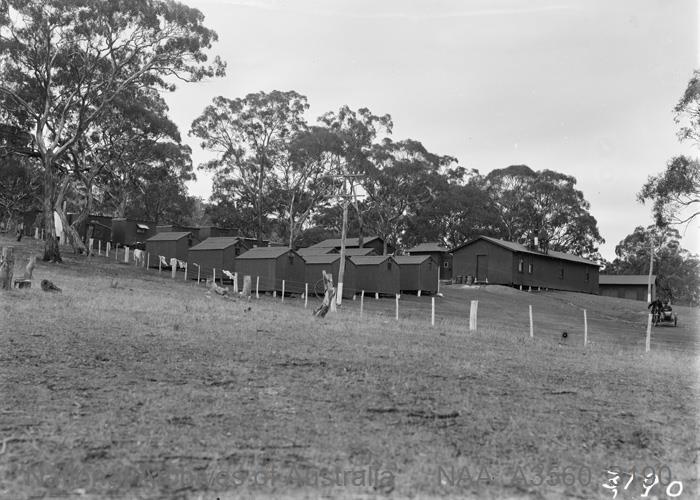 A rock quarry and stone crushing plant was also in use on Mount Ainslie during the 1930s. A tramway around the mountain was built, along with the chutes and conveyors used to transport rocks to the crusher. The crushed rocks were then used for road making.

The main walking trail is intersected by the Kokoda Track (part of the Centenary Trail, a 145 km self-guided trail through the ACT), with plaques en route to highlight events along New Guinea’s Kokoda Trail during World War II. Near the start of the Kokoda Track is another short trail leading to a memorial plaque. This was installed in 1993 as part of the United Nations Year of Indigenous People by local Campbell residents Michael and Honor Thwaites, dedicated to Indigenous people who have served in Australia’s armed forces.

Michael and Honor Thwaites were also instrumental in the 1978 declaration of Remembrance Nature Park at the base of Mount Ainslie. This was achieved with a large group of local volunteers and ACT Parks rangers, restoring the land and vegetation to a sustainable natural condition. 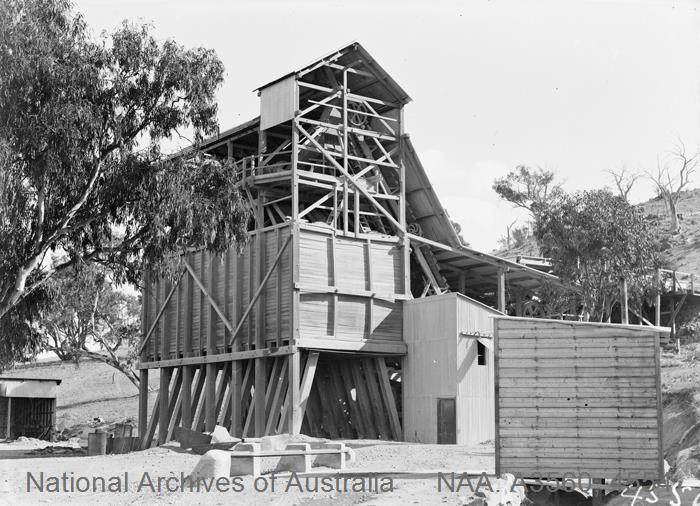 Stone crushing and screening plant on the eastern side of Mount Ainslie in 1928. Photo: National Archives of Australia (A3560, 4554).

Mount Ainslie Nature Reserve is the site of a critically endangered Yellow Box-Blakely’s Red Gum Grassy Woodland. This woodland provides habitat for a range of flora and fauna, including rare and threatened species such the endangered Canberra Spider Orchid, areas of Hoary Sunray, and stands of Drooping She-Oak which is an important food source for the Glossy Black-Cockatoo. At this time of year and heading into summer, you may see some of these, as well as Everlasting and Paper daises, Hairy buttons, lilies and orchids, and maybe even the delightful golden Button wrinklewort.

Diverse birdlife can be found on the south-eastern lower slopes above the Campbell Park Offices, particularly threatened and declining bird species. Recently, bird watchers have been enthusiastically active on social media posting images of the Red-backed Kingfisher, visiting from the semi-arid inland. The Rosenberg’s monitor was also a media hit a few years ago when a nest with eggs of this rare and cleverly camouflaged reptile were discovered and hatchlings observed by local historian and self-proclaimed “volunteer citizen scientist” Matthew Higgins.

A wonderful place to bring visitors, especially international visitors, who are gobsmacked by the fact that they can see kangaroos literally at the back of the War Memorial and just minutes from the CBD. So let’s hope we can again show all our visitors the wonderful gem with all its qualities that Mount Ainslie is. Soon! 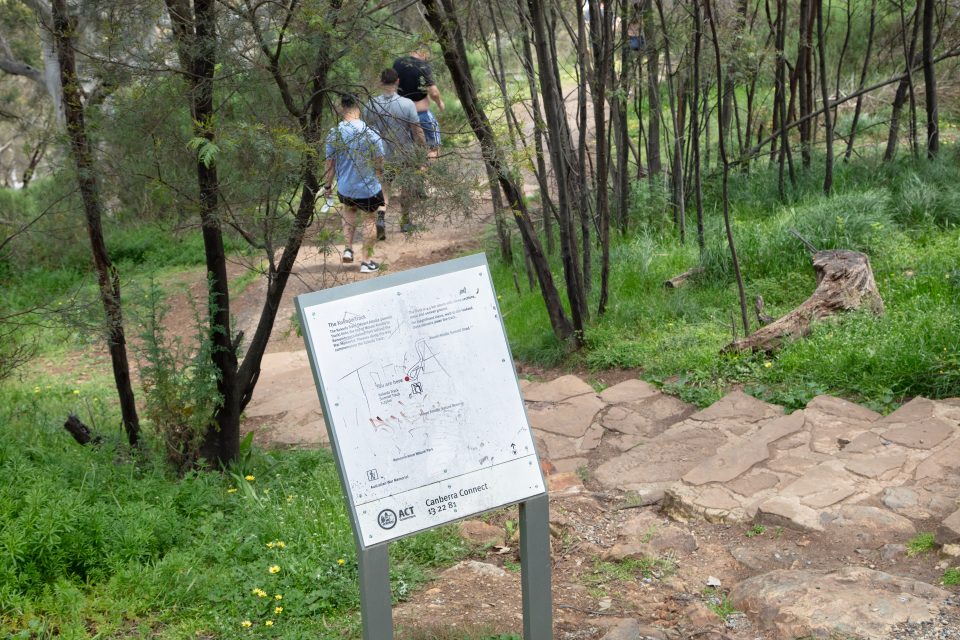 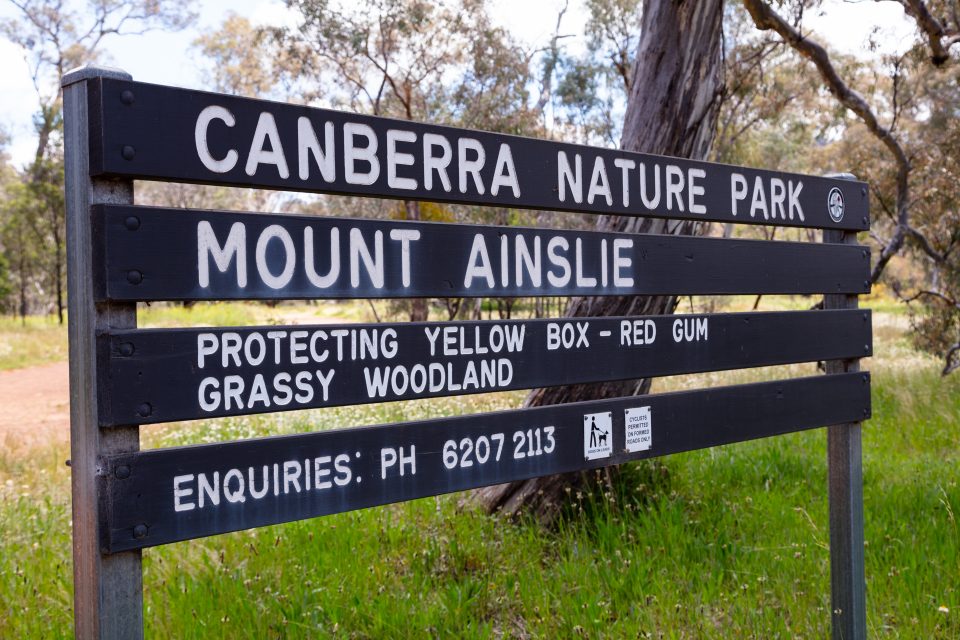 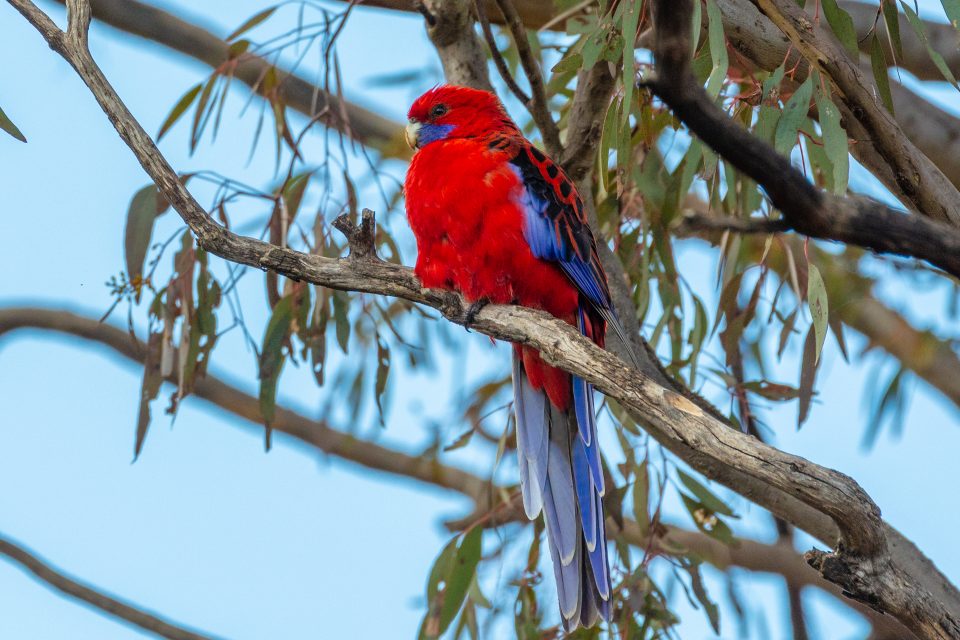 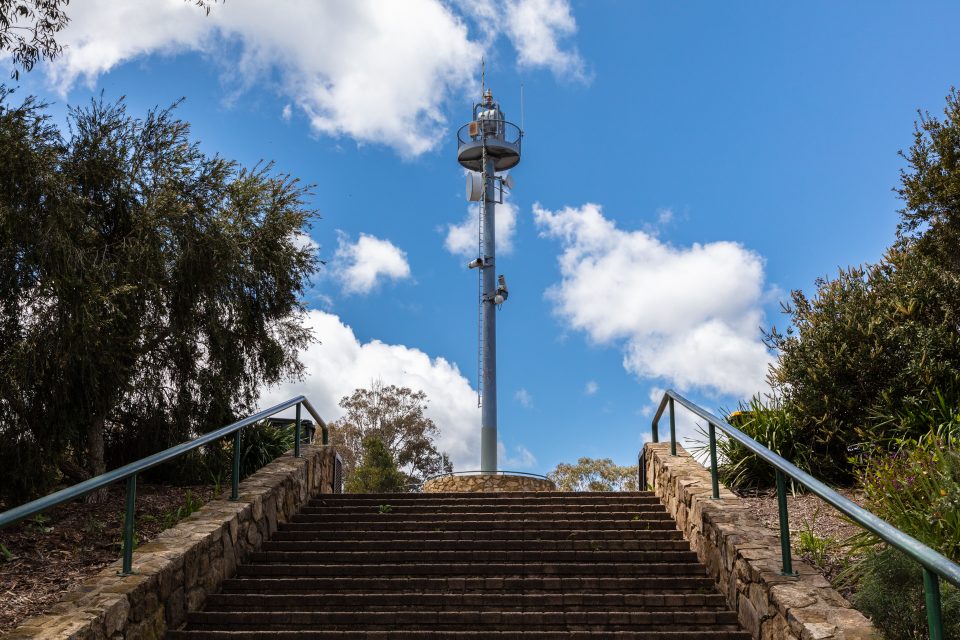 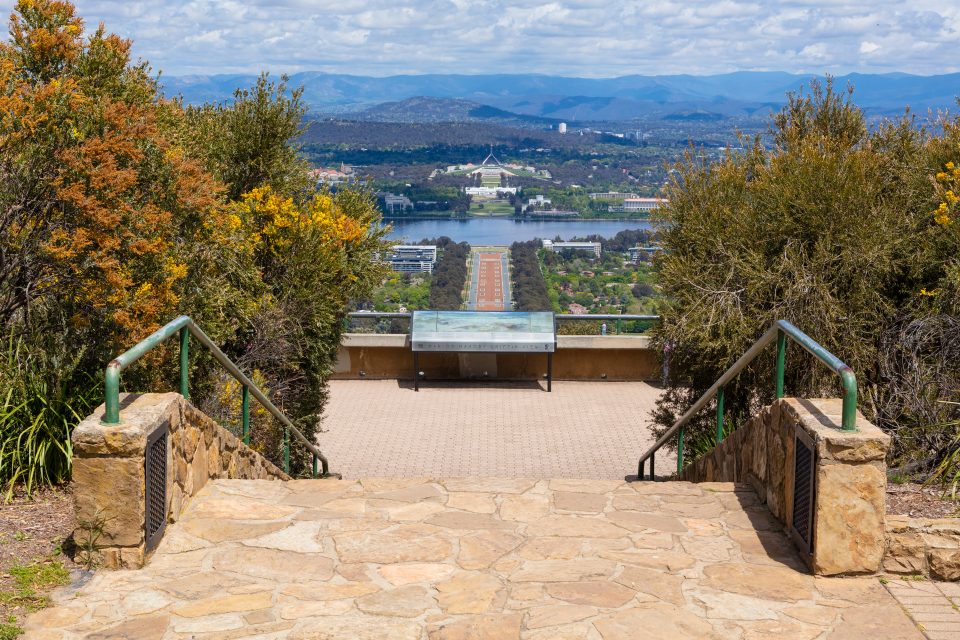 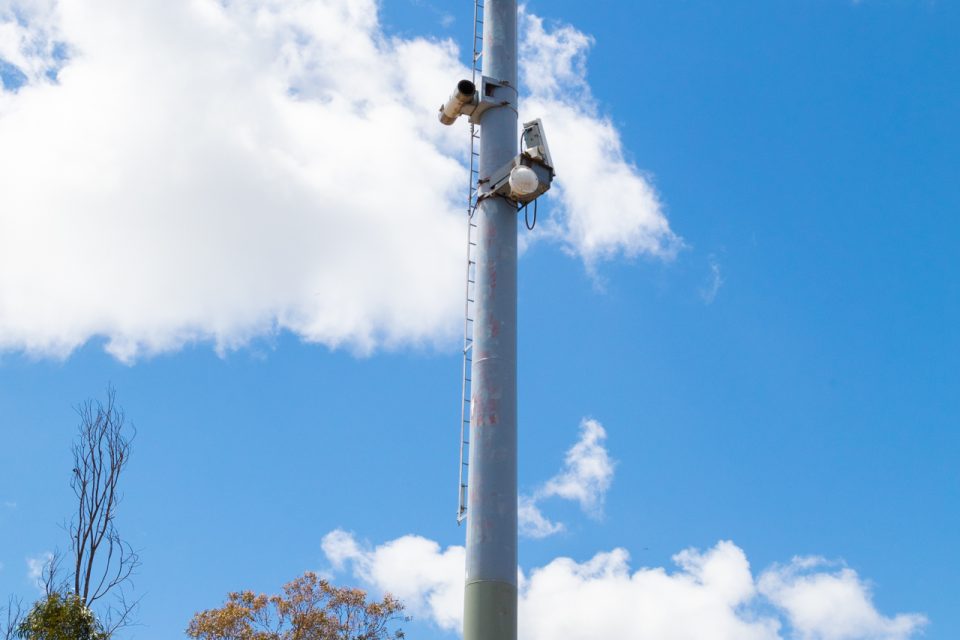 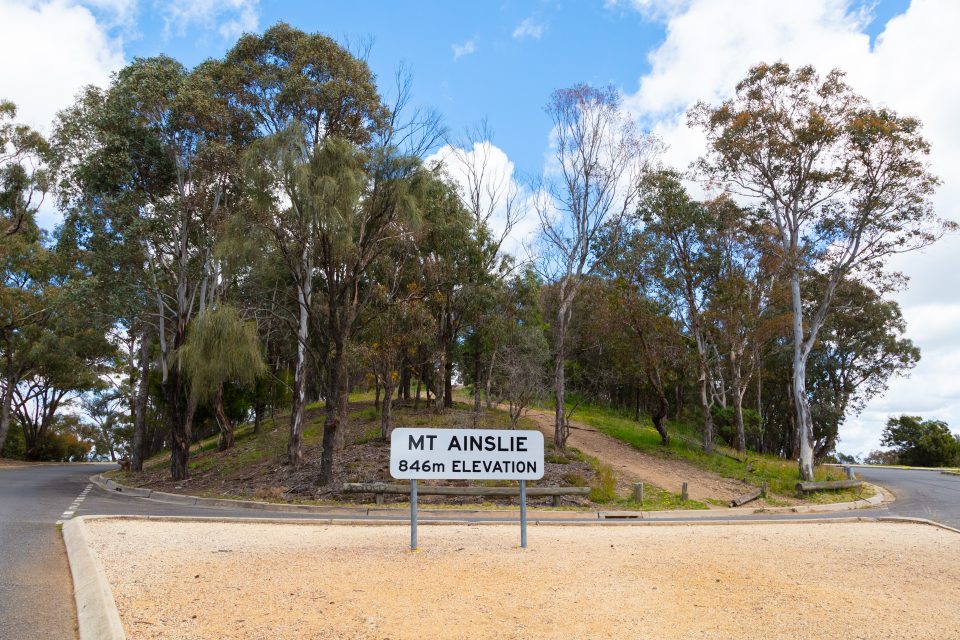 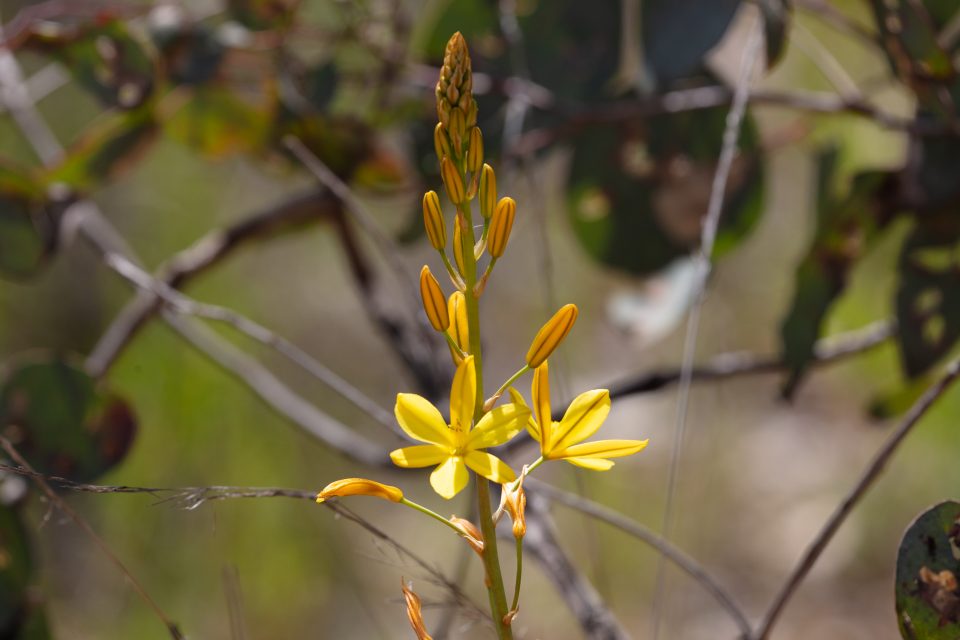 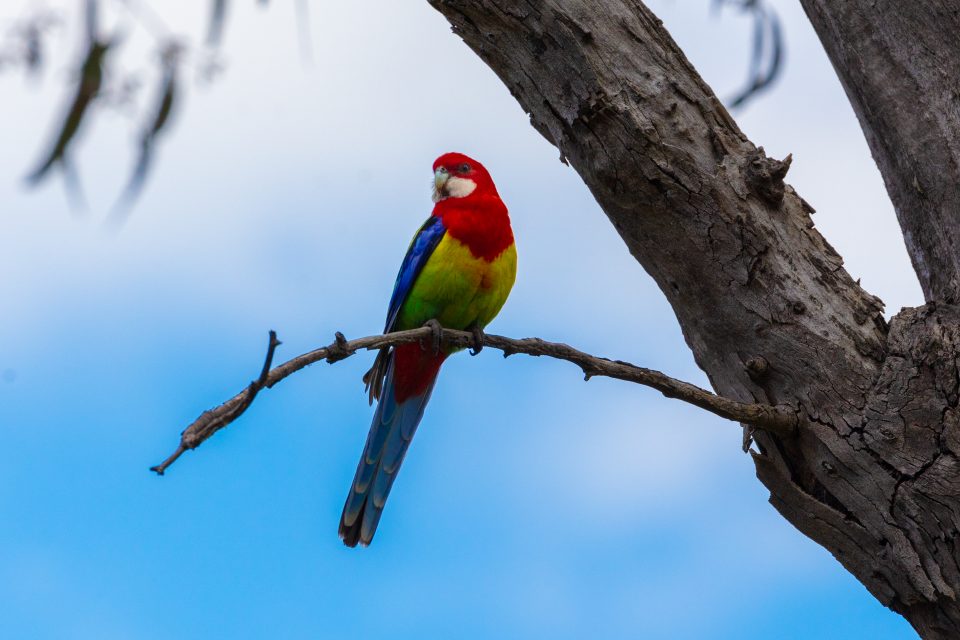 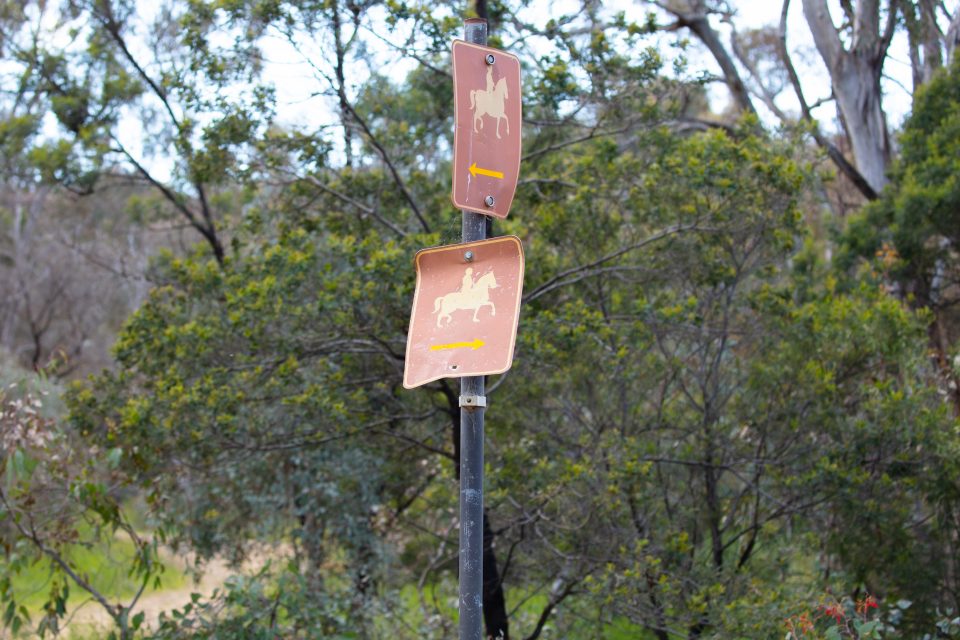 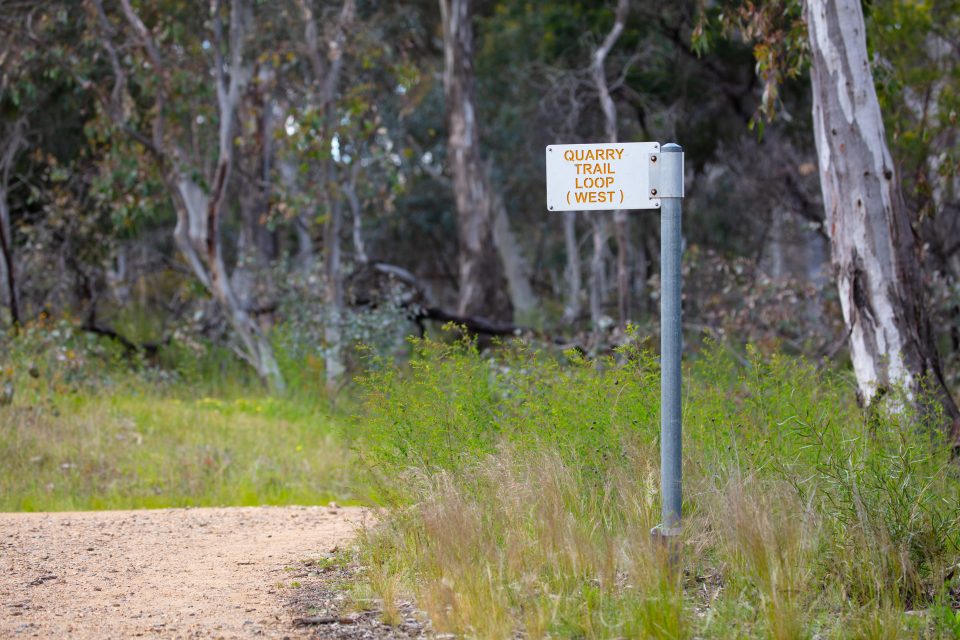 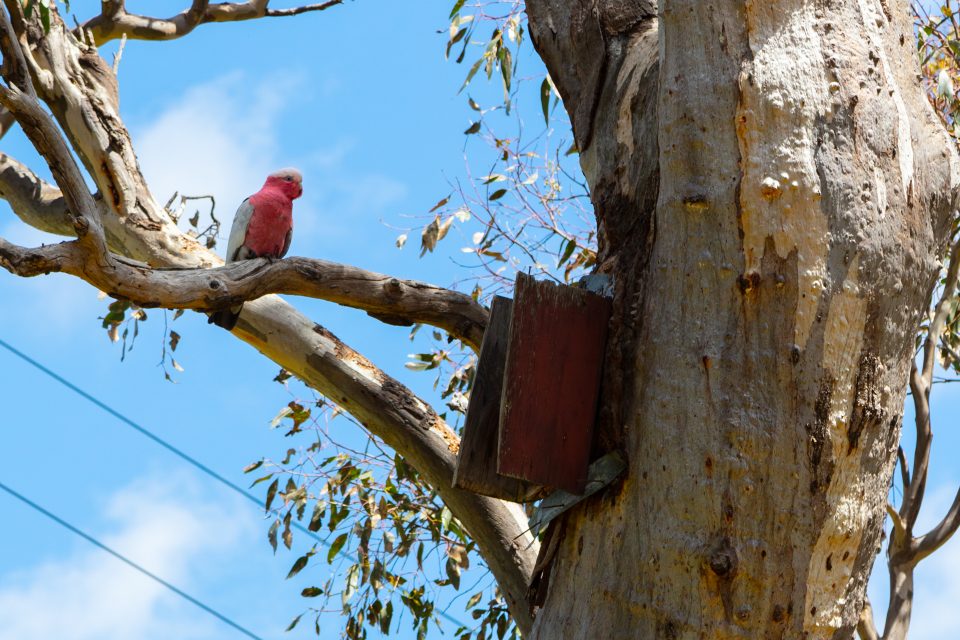 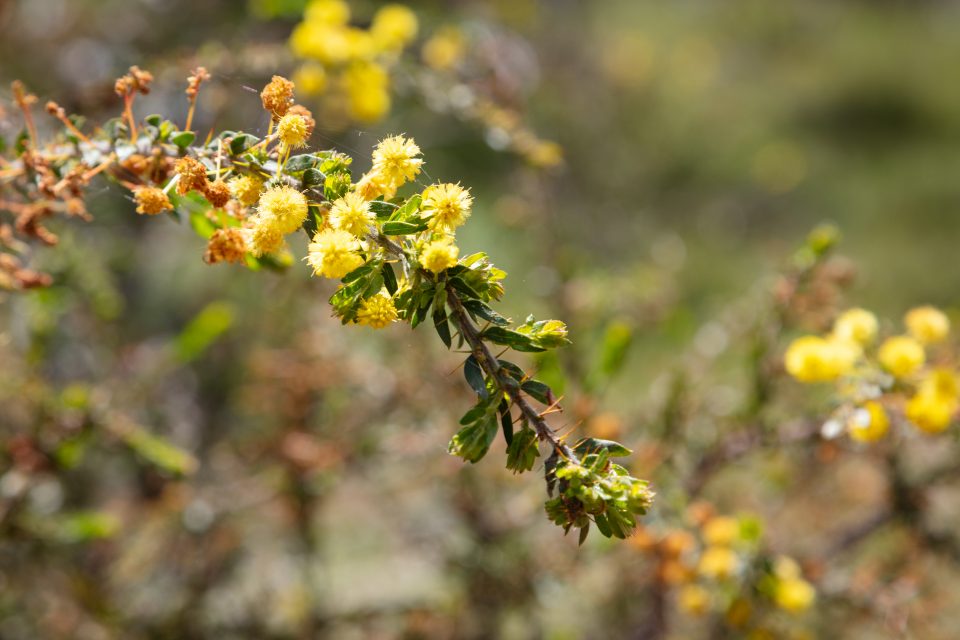 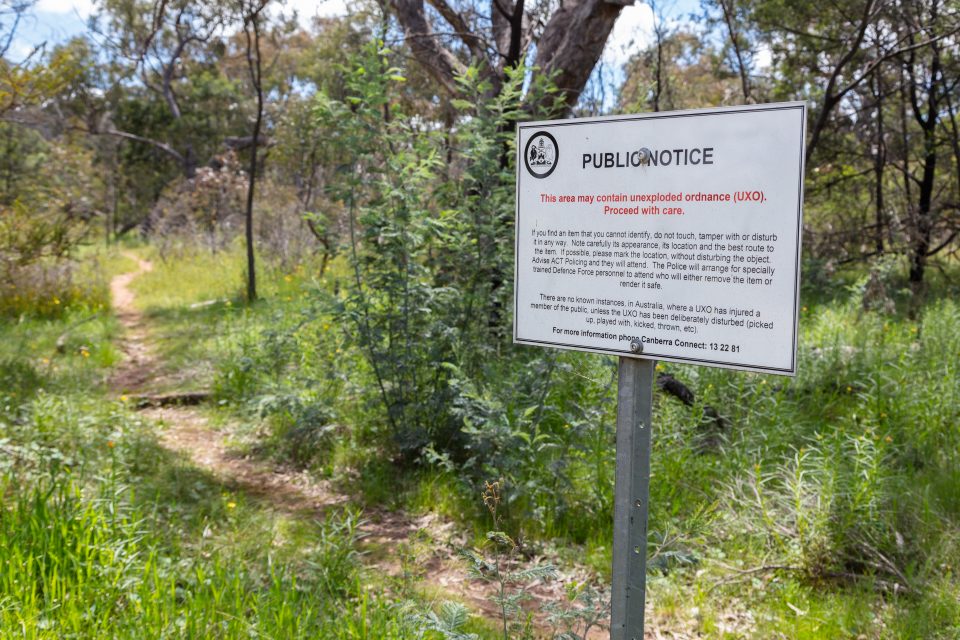 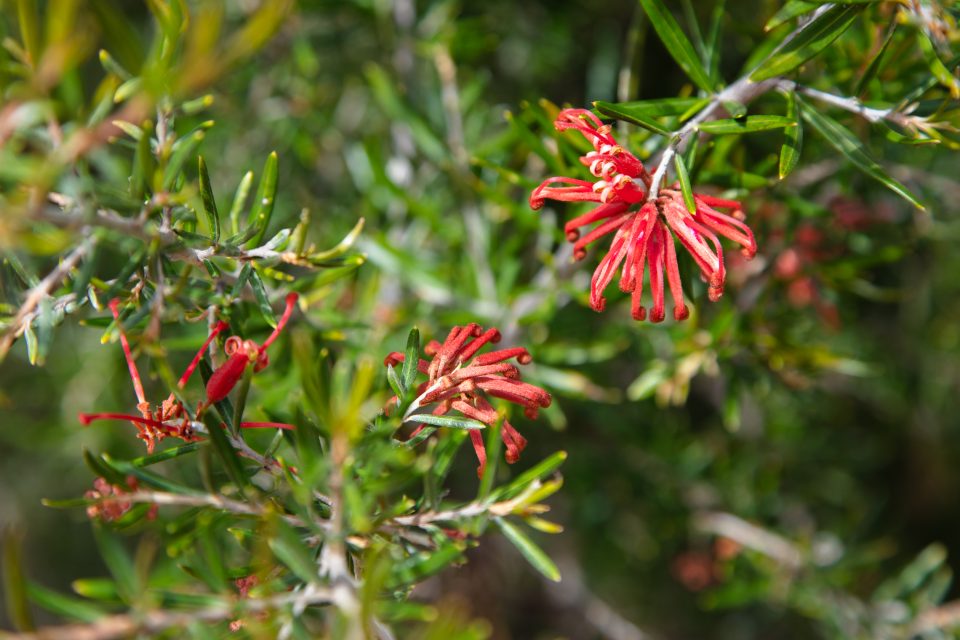 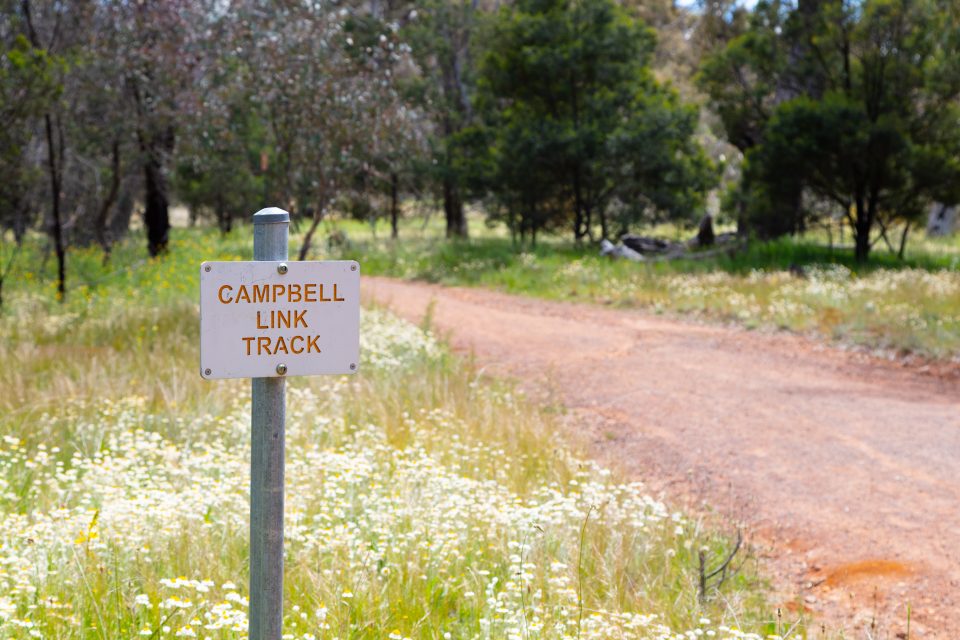 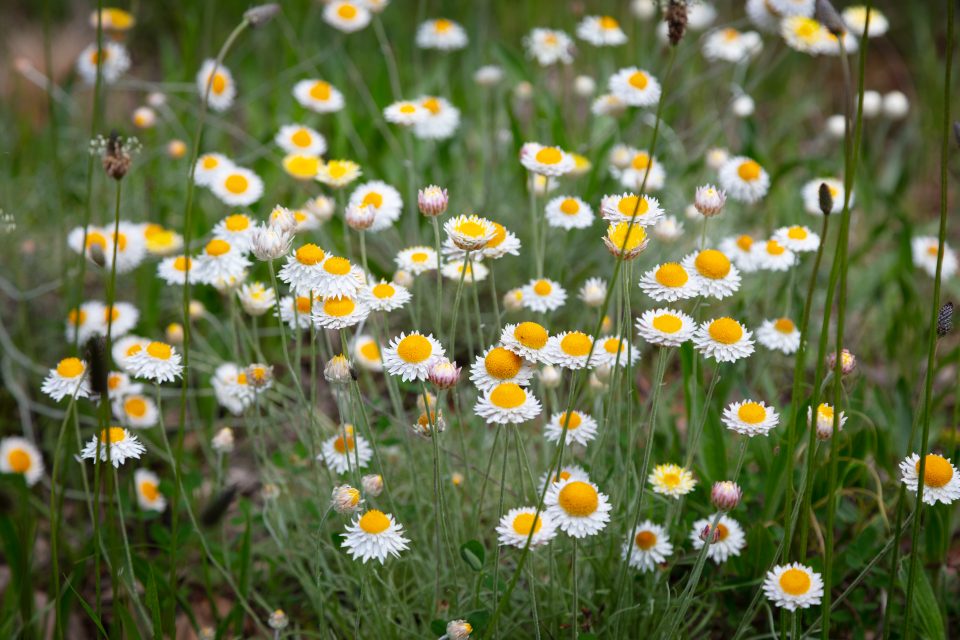 And the total panorama is spoilt by a couple if trees that have been allowed to grow too tall. That said it is the same fir a lot if lookout spots in and around Canberra

A camera was affixed to the beacon on Mount Ainslie when construction of new Parliament house started in 1980. It took one photo every day during construction. We were told that an animated video of the construction would be compiled and sold to the public at the end of the 1988 Bicentennial. It never appeared.

Over the years I have mentioned this and wondered whatever happened to the photos and the promised film. Apparently a movie was produced and the film was shown at Parliament House open days over the years although I’ve never seen it.

I remember a old squatter, apparently a World War 2 veteran, who used to live at the bottom of Mt Ainslie and would wave to many runners on the trail during Campbell High School’s annual cross country runs. This was in the early 1980’s.

Robyn Whitney Soxy’s Hut we knew it as.

One significant fact and feature was omitted in this article and was only apparent by a careful reading of the sign in the top picture: that view is the Marion Mahony Griffin View.

So named only in 2013, on the 100th anniversary of Canberra. A much-delayed recognition of her and her prescient drawing of that view – as Canberra was to become.

Apart from a privately-commissioned mural of her and Walter on a Kingston building, that’s the only acknowledgement and recognition of the person whose artwork was a major contribution to the prize-winning design of Walter Burley Griffin for Canberra.

Marion Mahony Griffin deserves more. As an architect and founding designer of Canberra – the nation’s capital in the nation’s interest.

Mt Ainslie used to be home to a few blokes who built nice weatherboard homes in what was then scrub. I am told that some of their house foundation are still there. When I arrived in Canberra in 1970, I was told that the policy of the Department of the Interior was to leave them alone until each one died and to demolish their homes the next day. Cannot have people living in freedom.

The location of the Mt Ainslie tradesmen’s camp is a little unclear. Corner of Ebden and Chisholm Sts could be where the ACTEW substation is. Alternatively, it could have been where Ainslie Village is now. That’s where the migrant hostel was after WW2 and possibly the much improved Mt Ainslie Camp that replaced the tradesmen’s mess in 1927.

An interesting read. Thanks.

Hi Marg,
Honour and Michael were close friends of my Mum and Dad from just after WWII onward. They were among my retreat options after I came to Canberra from 18 yrs onward. We regularly take our walking groups along ‘their trails’ . More? Both Ben Chifley and John Curtin used the walk from Old Parliament House to the summit of Mt Ainslie – for both contemplation and release from stress.

Yes, this was before the lake happened.

Griffin’s wife played a significant role in the layout of Canberra and this needs more publicizing.
A bloke just wrote that!? 😉 and 🙂

It’s a pity local history wasn’t taught back in the day. Climbing Mount Ainslie then was an adventure for the kids in Reid. We did it often.

What’s the name of the mountain in ngunnawal?