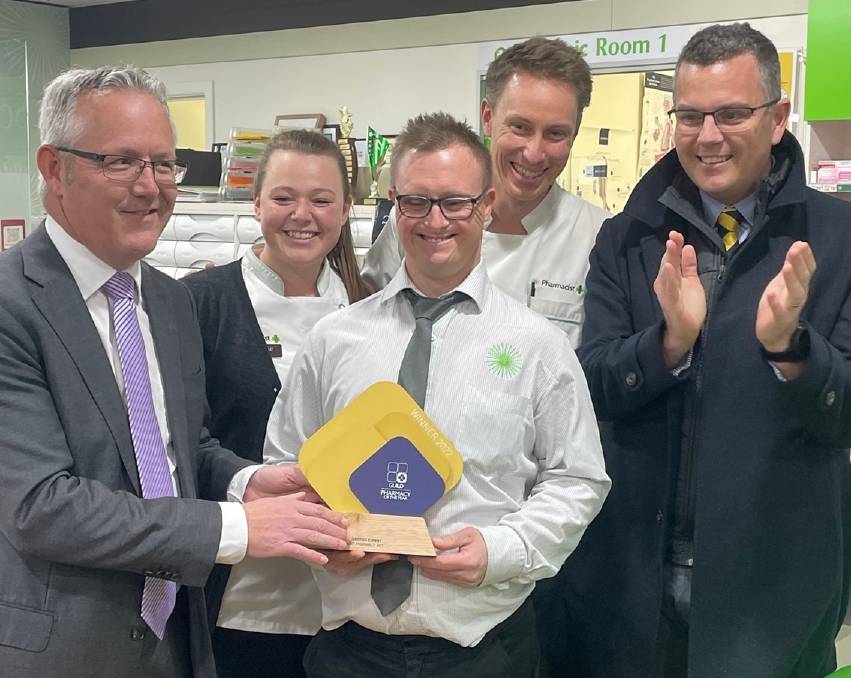 Daniel Lewis (centre) is honoured for his contribution to an award-winning pharmacy. Photo: Supplied.

A staff member at the nation’s Pharmacy of the Year has been honoured in a special presentation.

Assistant at Cooleman Court Pharmacy in Weston Creek, Daniel Lewis, has been recognised for his contribution and efforts in helping the business.

The award was presented by pharmacy proprietors Brad Butt and Brooke Veasey, and the pharmacy guild’s national president Trent Twomey.

Daniel was among staff members who collected the national award when Cooleman Court took out the Pharmacy Guild of Australia’s top gong in March this year.

“Dan was part of the entourage that went to collect the award on behalf of the pharmacy,” Mr Butt said.

“I think everyone saw how enthusiastic he was, so a bit later we got a message basically asking if the pharmacy guild could make a replica of the award specifically for Daniel.”

Mr Butt said Daniel was a great worker and a treasured part of his staff.

“Dan brings warmth, happiness, and a special kind of energy to the pharmacy. He’s a joy to have around,” he said.

Daniel has Down syndrome and takes care of the pharmacy’s robotic stock controller, the system that sorts the store’s prescription medicines.

“The accuracy of the stock robot is only as good as the person who works on it, and luckily for us we’ve got someone great working on it,” Mr Butt said.

Ms Veasey said Daniel was an extremely popular member of staff and much loved by all the pharmacy’s patients.

“He has a warm welcome for everyone and knows all our regular patients and makes them all feel as if they are part of the pharmacy family,” she said.

Daniel said he was proud to work at the pharmacy.

“It is an important job. Having a job makes me feel good, happy and part of a great team,” he said.

A replica of the Pharmacy of the Year Award was made specifically to honour Daniel’s outstanding contribution and enthusiasm for his work.

Do not go there very much,now, with limited transport, but I do remember it was a great shop!! Loved the shoes!!!

Wonderful job Daniel and to all the pharmacy staff. Thank you.

This pharmacy has a very special team working in it. They are always so helpful, and go the extra mile. So lovely that they have recognised Daniel for his enthusiasm and hard work. If only all employers could welcome and embrace neurodiversity and people with disbabilities in this way!

Hadn’t seen this one. <3 thanks all it was a very special day for Daniel.

He probably can do a better job than most other people.

Excellent pharmacy. Congratulations Daniel and the people you work with!