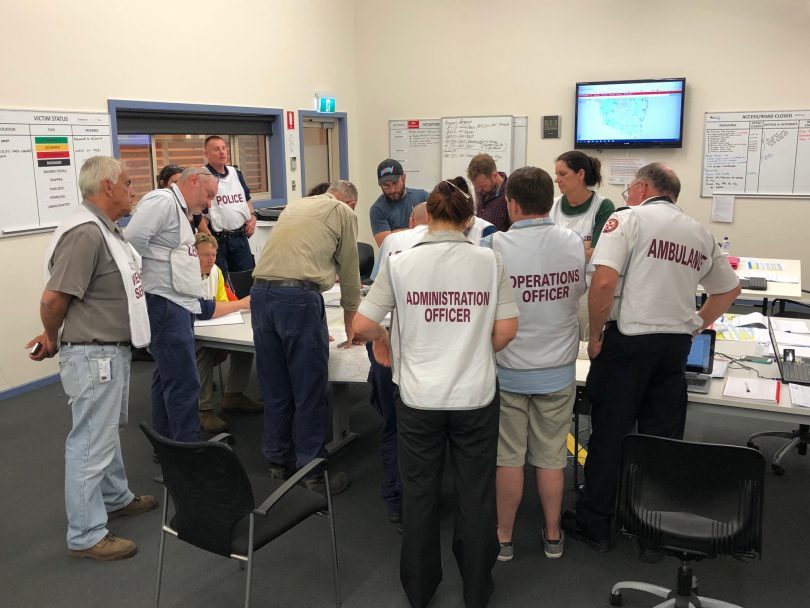 An emergency-level fire at Bemboka northwest of Bega has closed the Snowy Mountains Highway, the last remaining access point to and from the Far South Coast via Brown Mountain. Evacuation centres are being set up in Bega and Eden.

The RFS says the Werri Berri fire is moving fast to the north of Bemboka and that embers are starting spot fires ahead of the main fire front.

The highway has been closed between the Monaro Highway and the Princes Highway and motorists have been told to delay their trips as no alternative routes are available.

People in the area from Yankees Gap to Bemboka who plan to leave their properties are advised to leave now towards Bega. People in the area around Numbugga, Pollack Flat and Desert Creek need to watch out for embers and spot fires. The RFS advises that you should monitor the changing conditions. Follow your bushfire survival plan and know what you will do if the fire threatens.

Those travelling from Victoria should register at the Eden Fishermans Club on Imlay Street, Eden. It is important to register your arrival at both locations. Arrangements are being made to look after pets and animals at the Bega Showground.

Road closures are currently in place for the Snowy Mountains Highway, as well as Mount Darragh Road at the intersection with Burragate Road, Back Creek Road and Tantawangalo Mountain Road. The Princes Highway is also closed over the Victorian border at Genoa.

The RFS says that “there are multiple fires burning from Cooma to Bega and a number of these pose a serious threat to life”.

“We urge you to seriously consider if you should be in this area tomorrow. There may potentially be new fires burning in these areas that we do not yet know about, which may threaten you without warning.”

The Bureau of Meteorology says that strong winds will continue at elevations of around 800 to 900 metres and will gust at up to 90 km/h until a southerly change begins to work its way up the coast from late morning onwards. This will bring temperatures down and raise relative humidity by mid-afternoon.

Temperatures around the 30-degree mark are expected until the change comes through, but conditions will continue to be dry. However, strong southerlies could also put pressure on containment lines for the fire.

A further out-of-control fire is burning at Myrtle Mountain Rd, Wyndham to the west of Pambula, while there are four fires on the South Coast currently designated watch and act, including the Charleys Forest and Clyde Mountain fires, and the Araluen Rd fire in the Deua Valley.

The prevailing northwesterlies over the next 18 hours could also cause problems for the Currowan fire further north, where the fire could move towards Batemans Bay and the southern side of Nelligen.

Backburning operations have been taking place for the past week in an attempt to halt the fire’s progress into inaccessible steep country.

In other news, the RFS has confirmed that a volunteer firefighter has died this evening near Jingellic and a further two firefighters on the same truck have suffered burns and are being conveyed to hospital after their truck rolled while fighting the Green Valley, Talmalmo Fire, approximately 70 km east of Albury.

Thank you to the Red Cross volunteers supporting the many evacuation centres around the state. It is great to work with such committed people who are supporting those in need. Stay safe everyone and make sure you have your fire plan done and have discussed with your family.

Conor Laenen are we going this way camping?

Shannon Rellik - 3 hours ago
Sarah Jane yass please 😂😁 View
Sarah Jane - 4 hours ago
Shannon a day trip? View
Maya123 - 7 hours ago
Some gorgeous things there, but there are only so many cushions, vases, etc, you can have, before it becomes clutter. View
Lifestyle 15

Sandra Stevenson - 3 hours ago
Sylvana Whyte Good idea! View
Jennifer Blood - 5 hours ago
Very interesting explanation of how the buildings were constructed and leased, leading to the lack of uniform upkeep we see t... View
Iaian Ross - 7 hours ago
"To have time out, she would walk to Manuka Pool for a swim and walk back in time to be ready to cook the first breakfasts of... View
News 24

Acton - 7 hours ago
Housing unaffordability is a consequence of Greens/Labor ACT Govt policy. Here's why: Restrict land releases - drives up the... View
Ol L - 9 hours ago
Not true according to Mr Barr Mr Barr said the analysis showed the stamp duty reductions were helping first-home buyers and l... View
News 3