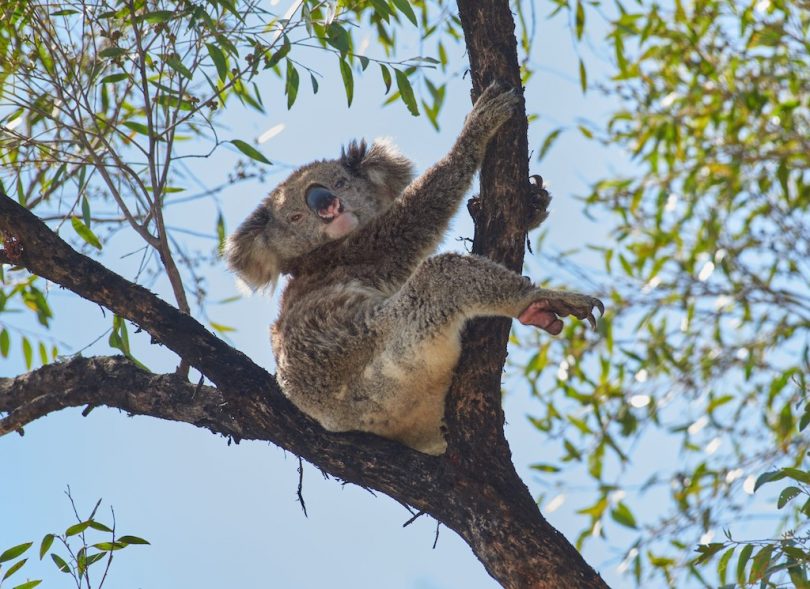 A mother koala and her joey spotted high in a tree on private property in the Murrah Forest on February 10 have stayed where they are, sparking concerns for their health as experts try to help.

“This is contrary to everything we thought we knew about Far South Coast koalas. We have observed that they usually change trees two to three times per night to feed,” Chris Allen of the Koala Action Network said.

Found a few kilometres from the Bajar Forest firefront active in the nearby Murrah Flora Reserve, Mr Allen and other koala experts have been concerned the koalas could be sick, injured or traumatised.

“We still don’t know for sure how affected by the fire these koalas are. We can see that one of the mother’s paws is very pink, which may be a burn, and she has one milky eye. It’s so unusual for them to be in one place this long, we wonder if she in shock and recovering,” Mr Allen said. 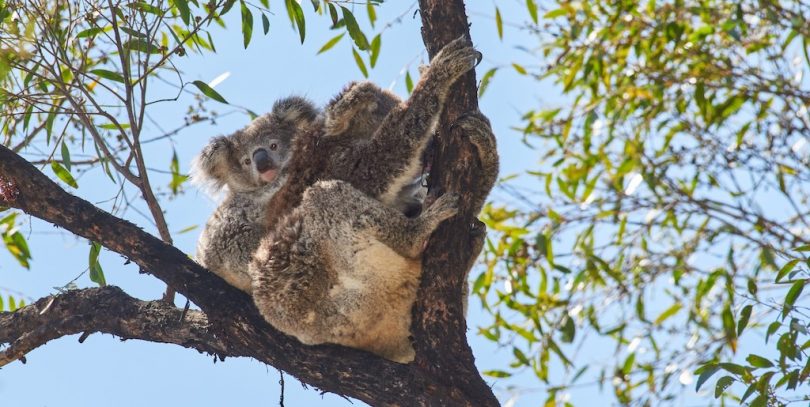 The joey is at weaning age so experts are wondering if the long stay in one tree is for the purpose of weaning. Photo: Dave Gallan.

Another theory is that the mother is undertaking a natural weaning period which involves a break in the routine of climbing from tree to tree.

The mother has been moving around freely and feeding, while the young joey is very active and eating leaves in the canopy as well as suckling.

The experts have done what they can to assess and help the koalas from the ground, including by sending fresh scat to Koala Health Hub to test for chlamydia, which is indicated by milky and weepy eyes and can lead to blindness in the animals. 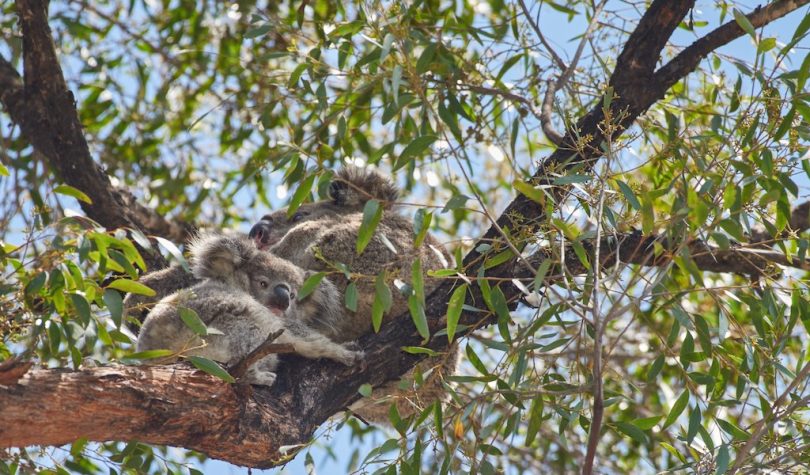 Sighting these koalas is a positive sign after fire, despite their possible ill-health. Photo: David Gallan.

They have also sent a variety of branches – known as a browse – up the tree to ensure the koalas have plenty of options to eat.

“We have provided supplementary feed in the form of branches from different species in a sealed tube with water … We have seen evidence of them browsing on these leaves,” Mr Allen said.

“Whatever the fate of these two koalas, seeing them post-fires is reassuring.

“A female koala with young has never been observed in the same tree for this long within living memory in this part of NSW. And the fact there’s one female out there who has raised her young through this time of drought and fire gives us cause for optimism.” 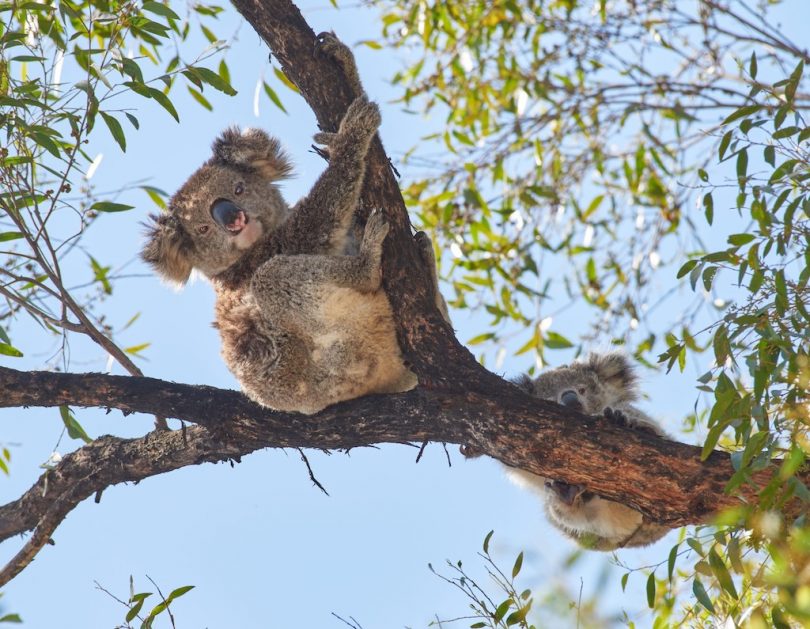 “Now, more than ever, we need to protect the trees they live in.” Photo: David Gallan.

“While the assessment is ongoing about the impact of the mega-fires across our state, it’s reasonable to assume tree-dwelling species that were already vulnerable would be badly affected by the intensity and scale of the fires,” Mr Gallan said.

“Before the fires, there were deep concerns about species such as koalas, greater gliders and yellow-bellied gliders. Now, more than ever, we need to protect the trees they live in.”

He said management of the park should be undertaken in partnership with the Indigenous community.

“The National Parks Association supports the aspirations of the traditional custodians, represented by the Biamanga Board of Management members, to have responsibility for managing this ecologically and culturally significant area in partnership with National Parks,” Mr Gallan said.

Looks like a weary old mum with an old eye injury.

I am going to use this important article to put a wee push in for an event on the 29th of Feb, raising money for wildlife carer groups in the ACT and surrounding region:

Come enjoy a fabulous evening of music at the Hall Pavilion on Saturday 29 February.
Opening at 5pm with the Canberra Shanty Club, this musical evening will also include performances by Canberra’s very own Paverty Bush Band (folk), Lisa Richards (soul infused folk jazz blues) Bobby James, Kopasetic (roots, folk and reggae).
Tickets are a mere $10, and are available at the door
Food and drinks will be available for purchase.

James Daniels - 9 minutes ago
Steve Ross despite any shortcomings, NSW government support for small businesses has dwarfed that provided by the ACT governm... View
Steve Ross - 4 hours ago
As a NSW resident, trust me, there wouldn’t be any difference, no matter if they were in power! 👎🏿 View
Sport 1

Xuan Le - 58 minutes ago
I wish I knew this earlier.... View
Allan Hill - 3 hours ago
Good one Todd man. Got confidence in you... View
Todd Wills - 4 hours ago
Lisa Sly been doing some prep so hopefully all good xxxx View
News 9