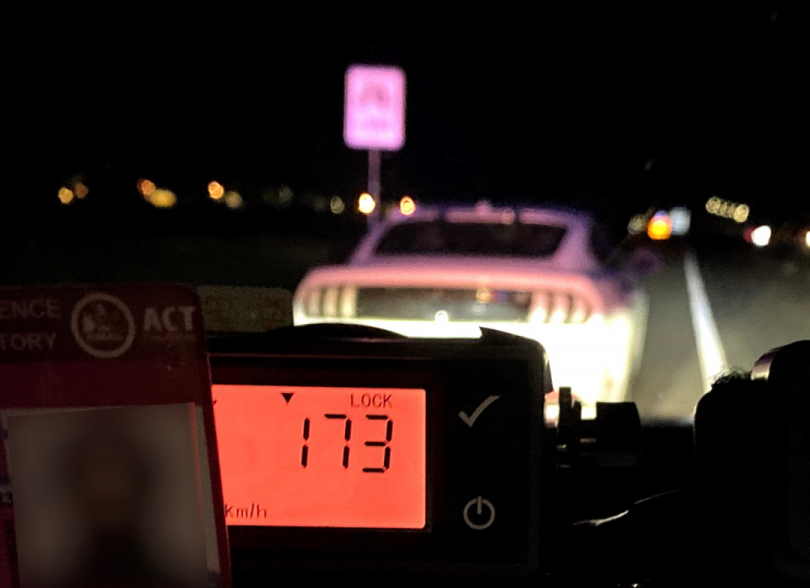 A 24-year-old driver has lost six demerit points and been fined $1841 for being more than one-and-a-half times over the speed limit along the Majura Parkway.

Police said a Ford Mustang GT driver was detected driving 173 km/h in a 100 km/h zone, southbound on the parkway at around 10 pm on Sunday, 3 April.

“The message here is to slow down,” he said.

“You can’t just drive this fast ‘by mistake’; it’s a deliberate choice to put other road users in danger. There is absolutely no reason to be driving that fast.”

Speeding is a significant factor in a large portion of all collisions on ACT roads.

There have been four fatalities on Canberra’s roads so far this year (2022).

At those speeds they should lose the RIGHT to drive for a year or two – and be required to watch their pride and joy being crushed.

That may make the others think.

This incident demonstrates the ACT Government’s enforcement is solely about revenue – they keep these people on the roads because people who have no intention of obeying road rules are a great source of revenue. If they were actually serious about road safety, people like this would be removed from public roads – as Inspector Hutchenson said “You can’t just drive this fast ‘by mistake’; it’s a deliberate choice…”

Speed in itself is not a danger.
Speed is a term defined in Australia as kilometres per hour.
Speed limits were devised when cars were no where near as safe and refined as they are now.
That said, Mustang driving is not known as smart.

You have to be a bit of a goose to race along Majura Parkway. An easy pickup for the ACT Police. I thought tailgating was a significant factor in a large portion of all collisions on ACT roads.