My truffle is bigger than your truffle. 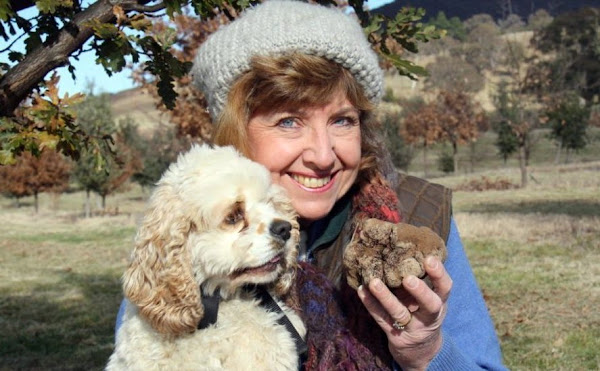 Every year there’s an element of rivalry and pride amongst our truffle growers when they find the first truffles. Someone suggested that finding the first truffle of the season should be as widely publicised as that European symbol of spring, the swallow. Even ‘The Times’ treats swallow sightings seriously (maybe it’s because UK winters are so damned depressing. One of my English mates described the winter light as “like looking up from the bottom of a pond”)

The other suggestion was to promote the occasion in the local and Sydney papers and “auction off the first big one”. There’s a problem however that these first truffles are not as black inside or as strong in aroma as those from later in the season. Like now. The growers don’t start selling them until they reach maturity and grade them according to shape and pungency. If you’re a restaurant shaving slices on top of a dish at the table, you prefer smooth round truffles that slice into attractive circles. Some of them have insect damage, or a scratch or two from an energetic truffle dog, but these knobbly ones are fine if you are just going to use a microplane and grate them, or chop them into a dish like rissotto or a sauce. According to this year’s emails, Sherry McArdle-English at French Black Truffles of Canberra claimed a 444g monster four weeks ago and sent a picture with Snuffle her truffle dog who found it.

The other pictures here are from this week and it was a truffle from Terra Preta, the Marshall family’s truffiere in Braidwood. As you can see it was huge, just under 700g and that makes it worth around $1400 (if when you gently break it apart it’s all usable. It’s a bit hard to see in all those crevices). It smelt fantastic and as the season goes on, they only get better. And then they stop. No more. You go out into the paddock and the dog takes one sniff and wants to get back in the truck.

So we can’t even auction off the last truffle of the season, because it was probably sold yesterday. Get them while you can.

Sherry’s truffles are available from various places at the Fyshwick Markets, Terra Preta has a stall at the Farmers Markets at EPIC on a Saturday morning.

[The Truffle Festival is ongoing] 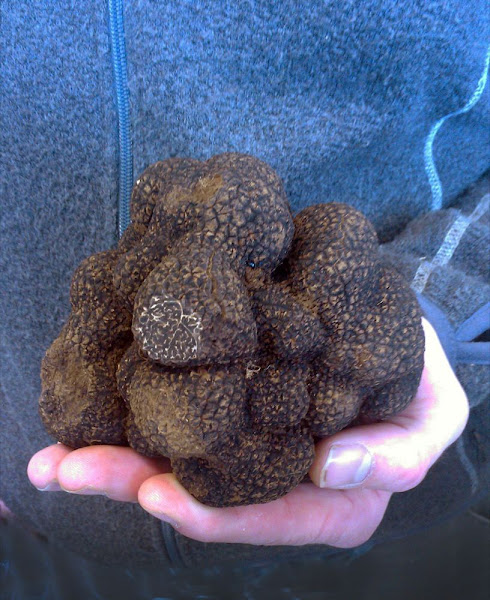 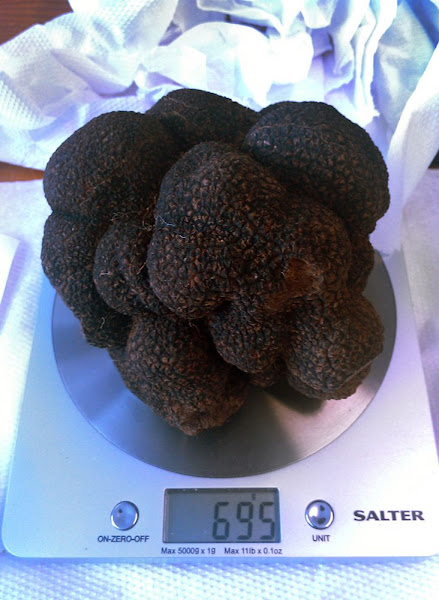 6 Responses to My truffle is bigger than your truffle.
Filter
Showing only Website comments

I was away when this was posted, but it’s really fun to see the clever dog who found the (much smaller) truffle I bought. Top work Snuffles. And Sherry!

I think the price is worth it, once a year. It’s like buying a really special bottle of wine.

Of course, if you’ve bought a truffle, you’re likely to do that as well.

I just tried my first black truffle, and while the taste and aroma was pleasant, I don’t think I could ever justify paying *that* much for them myself.

Glad it’s not just me. I’ve tried them here and in France and both time was left wondering what all the fuss was about. And especially the price. They’re all right, perhaps a bit “musty” for my taste buds, and certainly not something I’d choose first from the menu.

Having deferrred until later in my life the enthusiastic taking up olives, anchovies, snails, eggplant, artichokes, mussels and a lot of other things that were very “foreign” to me in my younger days, I gave truffles a go in France, Italy and now Australia. All three times they left me wondering what all the fuss is about. To me they hardly have a taste at all and as a consequence they are very bland and boring.
They seem to be some sort of and “underground mushroom” without the yummy taste of that funghi.
They would probably be OK on a pizza though but not at the ridiculous price they are at present.

You must be a hoot at parties.

Paul Leins - 44 minutes ago
Typical of the Libs - sideline the elected representatives and put it in the hands of a bureaucrat. Any angle to try and unde... View
Lea Powell - 44 minutes ago
Brian McKenzie indeed but not on teacher conditions. Teaching is a nightmare unto itself in terms of hours of work done vs wh... View
Paul Leins - 48 minutes ago
Like a Liberal government ever increased a workforce? 😂 Federal aps staffing caps are gone and yet departments are still p... View
Property 4

Alex Kerr - 56 minutes ago
Jack aye look at that View
Kevin Hingston - 1 hour ago
Shane Jasprizza it’s not just pure greed. The supply side cost has gone through the roof last two years. I’m told the inc... View
Fred Pilcher - 1 hour ago
What took them so long? View
Breaking 2

nobody - 2 hours ago
It’s time the regime came clean and explained to the people of Woden exactly why their pool is closed this summer. View
bj_ACT - 2 hours ago
Woden has lost so many sporting and public facilities over the last couple of decades. The Tuggeranong ice sports facility is... View
Courts & Crime 9

Capital Retro - 3 hours ago
This was in a news release shortly after the fire started: "Army Lt. Gen. Greg Bilton said military helicopters involved in s... View
Steve Ulr - 5 hours ago
Matt Sposito absolutely correct. ADF need to be accountable for a change. They have been allowed to cover things up way too o... View
Opinion 31

Chris Cummins - 3 hours ago
Rob Calvert priorities vs funding. Complain to government. You complain of poor service - I gave you Ann important example of... View
Rob Calvert - 3 hours ago
Chris Cummins What's that got to do with the failure of the the police to respond to burglary, minor assaults, their failure... View
News 19

Paul Magarey - 4 hours ago
If they can pay tax, they should get to vote. No taxation without representation! View
Capital Retro - 4 hours ago
"Most of the boomers on FB have no clue how the world works." Typical of the contempt we receive from young people these days... View
Geoff Roberts - 5 hours ago
Just an overt ploy to ensure the Greenies increase their vote and power. Absolutely NOT. View
News 36

@the_riotact @The_RiotACT
Meet (or should that be meat?) Jamie Sangster of online meat #delivery and #education platform, Meating You https://t.co/CPNnnh7bUb (30 minutes ago)