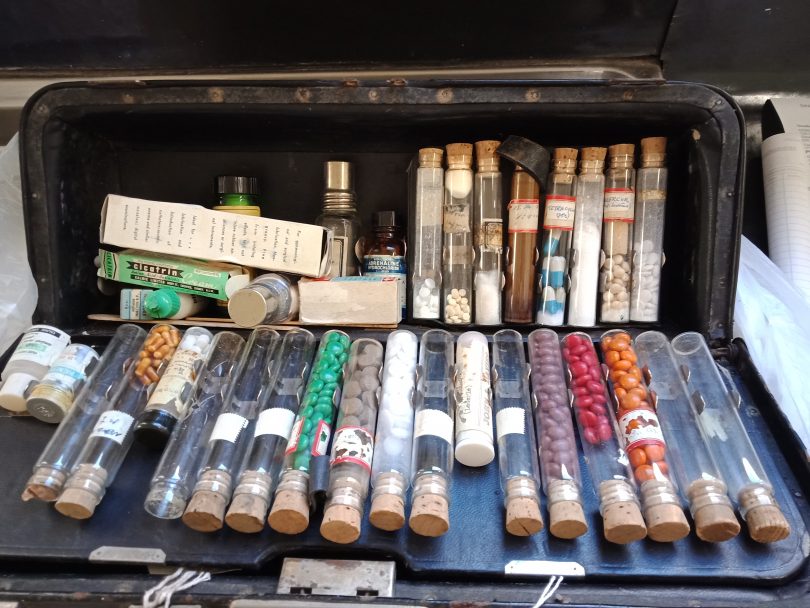 Some of the pills inside the old case were so dangerous they had to be destroyed. Photo: Kate Goulding.

Three-and-a-half years ago, the Goulburn Hospital Historical Cataloguing Volunteer Group found an old doctor’s case tucked away in a cupboard at Bourke Street Health Service with a handwritten note attached.

The case, estimated to be about 50 years old, wore the marks of being well used – rusted edges and tiny tears in the black leather coating – and carried a moment of medical history when pills were brightly coloured.

Some were so dangerous they had to be destroyed.

But its most intriguing feature was the handwritten tag attached to the chapped handle.

Written in cursive in black pen, its words were as though the writer wanted someone to find the bag one day and solve who he or she was. 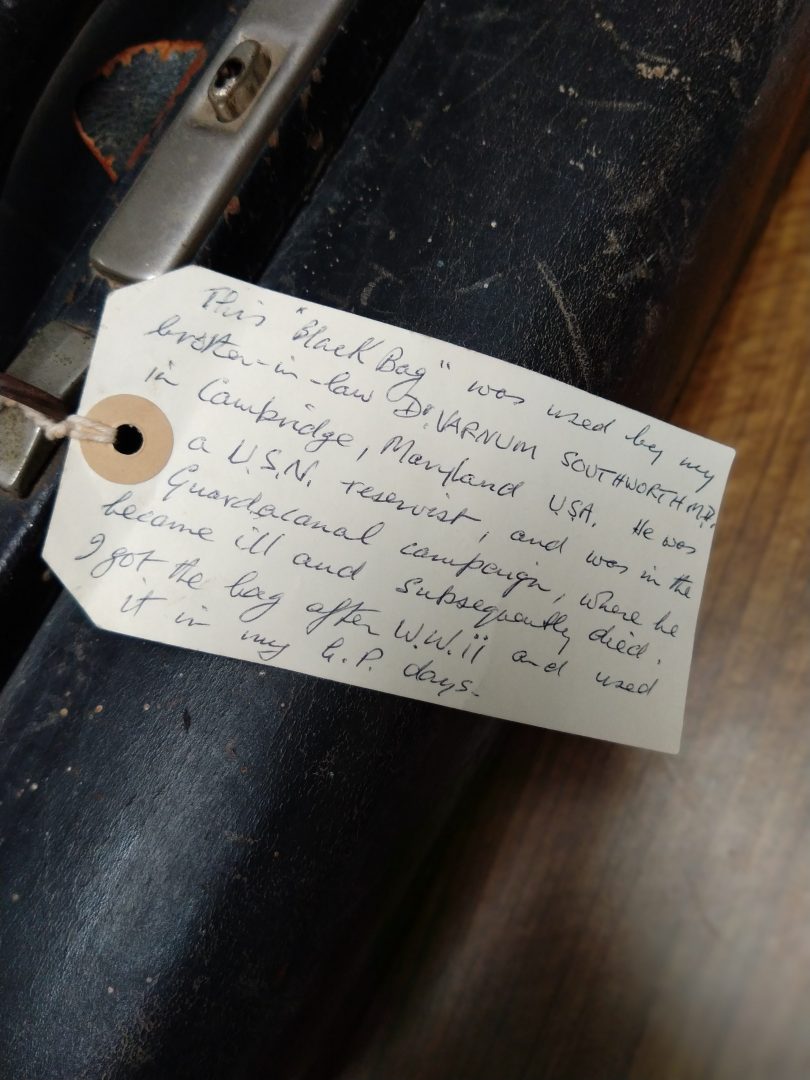 The label attached to the mystery case. Photo: Kate Goulding.

The label read: “This ‘black bag’ was used by my brother-in-law Dr Varnum Southworth M.D. in Cambridge, Maryland, USA. He was a U.S.N reservist, and was in the Guadalcanal campaign, where he became ill and subsequently died. I got the bag after WW2 and used it in my GP days.”

One of the volunteers, Jenny Sullivan, said she had searched online for a link between the mysterious GP’s brother-in-law, Dr Varnum Southworth, and Goulburn, but could not find one.

However, with the help of the community and a response from a history buff in the United States, Ms Sullivan was recently able to establish the bag belonged to Dr David Henchman (1920-200.

Dr Henchman practised paediatrics in Goulburn from 1976 to 1985 with the NSW Health Commission. He had been a GP in Canberra from 1951 before moving to Goulburn in 1976.

However, there is still one mystery the volunteer group would like to solve: how did the doctor’s case end up at Bourke Street Health Service with the mysterious tag attached?

When the volunteers first opened the case, Jenny said that it was lined on both sides with glass vials of bright coloured pills.

The pills, which included Phenergan and adrenaline hydrochloride and many more, were taken to a pharmacy and destroyed, but the glass vials have been kept in the bag.

The volunteers plan to fill them with replica pills. 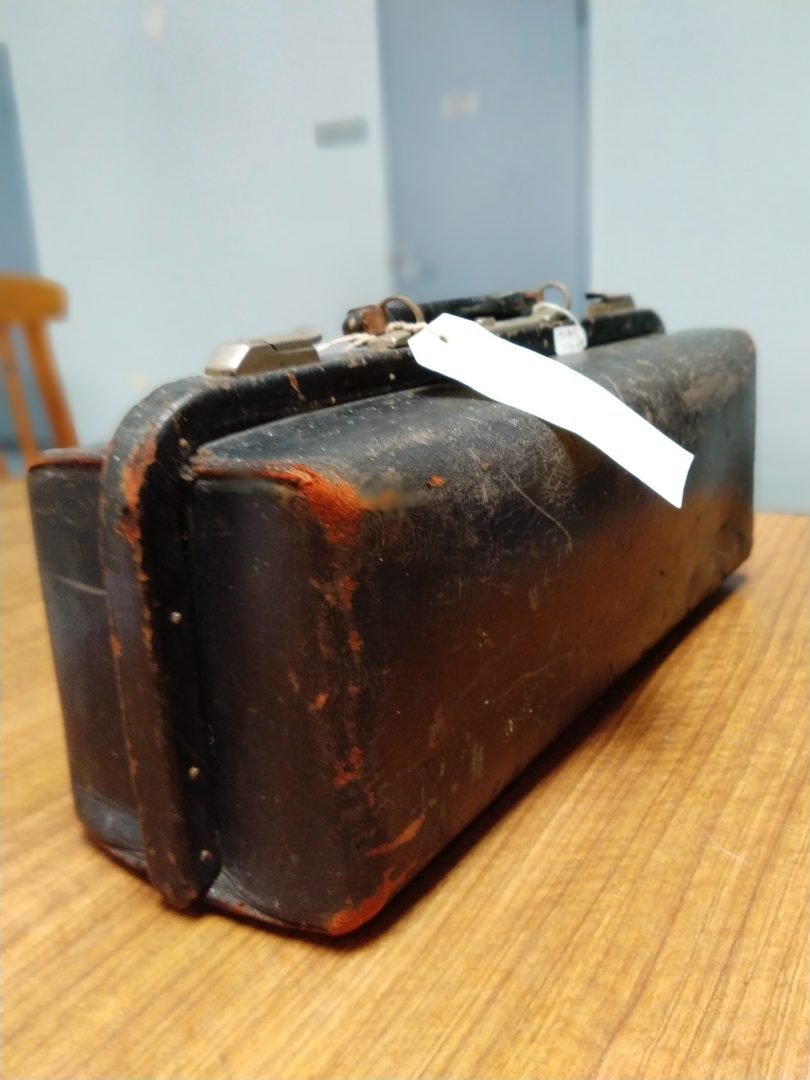 The case, estimated to be about 50 years old, wore the marks of being well used. Photo: Kate Goulding.

It is one of almost 5000 historical items the volunteers have found at the Bourke Street Health Service and Goulburn Base Hospital.

In 2018, seven volunteers from various Goulburn museums and three former nurses were invited to locate, catalogue and store items of historical significance that were scattered throughout the hospitals.

Most of the items in the collection are circa the 1940s to 1970s and include artefacts such as nurses’ uniforms, medical equipment, hospital domestic equipment, photographs, charts, medical books and banners.

If anyone can help the volunteers solve how the case got to Bourke Street Health Service, email katherine.lee2@health.nsw.gov.au.

Tim the Yowie Man A mystery for you? ☺️

Do they need anyone else to help with the destruction of any other old pills they find? Asking for a friend..

A quick search on Trove threw up the following, which seems possibly relevant!

MISS GWYNNETH HENCHMAN (only daughter ‘ of Mr. .Justice H. H. Henchman), who recently announced her engagement to Dr. V. C. Southworth, of USA., will be married this month in Sydney. Dr. Southworth is on his way to Australia at present, and they will be married shortly after his ar rival. The wedding will be a quiet one, with only members of the family present, and the couple will sail for America in January. Their future, home will be in Cambridge, Maryland, on the Chesapeake Bay, where Dr. Southworth. practises in Orthopaedic Surgery.

Note possibly written by Hereward or Humphrey Henchman, Gwinneth’s brothers? Timing would be about right. The Justice is a very interesting person to read about.