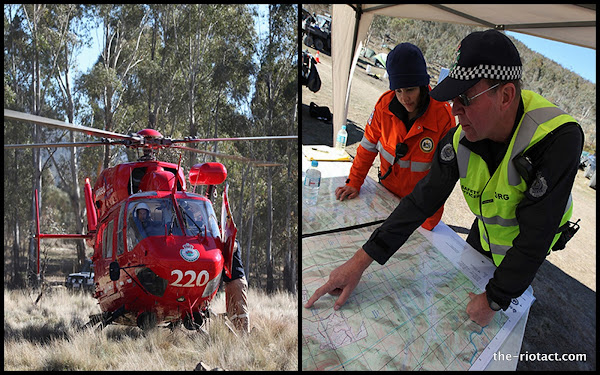 Over the weekend ACT Policing along with several local and interstate emergency response agencies were tested in a search and rescue exercise within the Namadgi National Park, south of Canberra.

The exercise ran from Friday afternoon to Sunday afternoon (3 to 5 May) in the Yankee Hat area of Namadgi National Park. The remote location provided a robust test of emergency response capabilities in a realistic scenario involving a plane crash and several missing persons within the park.

Sergeant Stephen Cooke, in charge of AFP Search and Rescue, said: “The holistic approach by involving several agencies provided a realistic environment to test and stretch our response teams.

“I’d like to thank the many emergency response volunteers, such as ACT SES members, who gave up their weekend to be involved in the simulation. We also had several volunteers assisting by acting as witnesses or missing persons.

“A highlight of the weekend was a mock medical evacuation by helicopter. Personnel from ACT Police, ACT Parks, ACT SES and an ACT Ambulance Service collaborated seamlessly to carry out the simulation,” said Sergeant Cooke.

ACT State Emergency Service Chief Officer Tony Graham said, “We’re really pleased with the way our teams worked closely with ACT Policing, ACT Parks and other agencies during the exercise. For a few SES members, this was their first training exercise and the remote location provided a real challenge. These realistic exercises provide a great opportunity for our volunteers to learn new skills.”

Nada Krstin - 20 minutes ago
oops, meant to say, cannot have it one way! :)... View
Nada Krstin - 22 minutes ago
No. And if you think they are mature enough to vote at 16 or 17, then they should be tried for any crimes as adults as well,... View
Selene Sharp - 29 minutes ago
I’m more concerned about whether it benefits society rather than just me View
Business 15

Mazzie Woodward - 32 minutes ago
Thanks James Milligan MLA and Leanne Castley MLA for all your advocacy on this issue - keep up the pressure as I’m sure thi... View
ChrisinTurner - 6 hours ago
1500 sq m is enough for an ALDI. View
Opinion 5

Mark Parton MLA - 1 hour ago
Thanks for constructively engaging, but I would reject the characterization of my advocacy for Alex as a media stunt. And I w... View
Mark Parton MLA - 5 hours ago
All I’m doing, is trying to help as many people as I can, as best I can and I make no apologies for doing it. Everything I... View
News 10

HiddenDragon - 3 hours ago
"...Capital Recycling Solutions, is in early talks with the government about its costs. It is hoping for an agreeable settlem... View
Lifestyle 3

markd1 - 5 hours ago
Large Eucalyptus trees maybe not, but about half of all Eucalypts are mallees--small trees, many of which are perfect for Can... View
Motoring 3

Linda Stapleton - 6 hours ago
I was homeless once with two babies... oh I had the car, but it isnt the safest place to raise kids... thank goodness for wom... View
Community 2

Linda Stapleton - 6 hours ago
Just look at the size of that Rhubarb...wow View
show more show less
*Results are based on activity within last 7 days

The name Robyn Rowe Chocolates will evoke sweet memories for anyone who has lived in Canberra and the Yass Valley...
News 27

@The_RiotACT @The_RiotACT
Canberra musician @lucysugerman deals with the messy, angry aftermath of a break-up on her latest single, 'golden boy' https://t.co/awfirYuNsw (2 hours ago)

@The_RiotACT @The_RiotACT
Amelia Bidgood ventures off the beaten track to @yarrhwines to try their seasonal Winemaker's Sail ... and can't help but pick up a bottle of their stunning sangiovese https://t.co/vfesq5BVzv (3 hours ago)

@The_RiotACT @The_RiotACT
There’s something about that 1940s charm that wins you over every time. This home at 7 McCaughey Street in #Turner is no exception https://t.co/iTSEzUMGL9 (4 hours ago)