National Portrait Gallery Dance Off – Round 3! 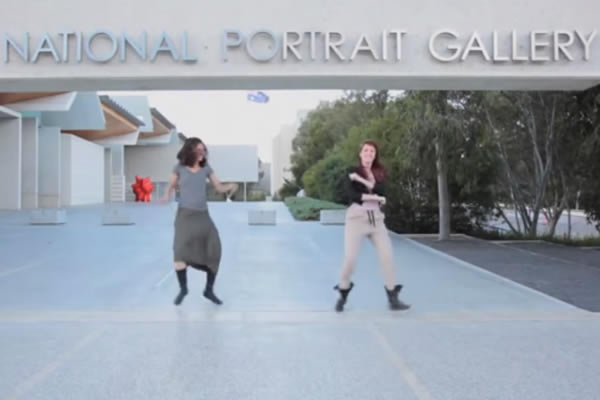 News is in! The National Portrait Gallery were triumphant over New Zealand’s Otago Museum and are now into the third round of the international Museum Dance-off. The NPG, who are the only Australian entrant, took Trans-Tasman glory last week thanks to your support, and finished the day with 65% of total votes. Today, the NPG need your vote more than ever to secure a spot in the semi-finals!

What is a Museum Dance-off, you say? Well, it is just that. A battle of the boogie and a bout of the beats between cultural institutions around the world – filmed in galleries, museums, historic houses – you name it, they’re dancing. The online competition, which has gone viral in recent weeks, was instigated by a blog called When You Work At A Museum. Run by a mystery museum person based in the US (who keeps her identity under wraps), the blog is followed by institutions around the world who enjoy its daily animated updates and museum in-jokes.

In round three, the NPG will be going up against the Museo National de Escultura (National Museum of Sculpture, Spain). Funnily enough, the Spaniards pulled together a dance video very similar to that of the NPG video to Janelle Monae’s Tightrope. When watching both videos, you see museum and gallery staff pushing and pulling painting screens, popping out from behind sculptures, spinning on chairs, and dancing in the freight lift. A standard day in the life of a museum or gallery worker? Why not.

The instigators of the NPG’s dance-off, Heidi Elliott and Tegan McAuley, say that the video was ‘a total joy to put together, and the best teamwork exercise we have ever invested in’. ‘Dance is the universal language of the world’, says McAuley, ‘and it’s also a wonderful way to bring out the best in people, as we witnessed when encouraging our colleagues to bust a move’.

To vote and get behind the NPG, jump onto www.whenyouworkatamuseum.com (voting closes 10pm tonight).

This is not just a matter of Canberra pride, but NATIONAL pride.

One Response to National Portrait Gallery Dance Off – Round 3!
Filter
Showing only Website comments

That the link was incorrect (relative rather than absolute) meant that you couldn’t follow it to vote, but at the end of the day we were thrashed by the Spanish. Hope to reverse this result at the World Cup. LOLZ.

Julie Macklin - 44 minutes ago
Angie Carey Where? I can't see any posts on the footpath with signs in the photographs. On the wall yes, but is that an offic... View
Angie Carey - 1 hour ago
There is also footpath signage for this parking spot. View
Grant Burns - 2 hours ago
I’m no mathematician but as I see it there are 318,148 registered vehicles in the ACT (ABS Jan 2021), and according to the... View
News 10

John Dow - 1 hour ago
Still go down via Nerriga, but no road from Araluen still. The NSW roads website only mentions Brown Mountain and Kangaroo Va... View
Andre De Menezes Ribeiro - 2 hours ago
Thi Thai Hien Pham we just made it!... View
Community 166

Lisa Woods - 1 hour ago
This is appalling give him back his best mate he is a very kind and gentle dog everyone I've seen Patting him or talking to P... View
Nada Krstin - 2 hours ago
Craig Robinson Thank YOU for setting it up! I see good results, that Bruiser has been desexed and will be back with Paul soon... View
Sunny Jay - 6 hours ago
The dog needs to be under control at all times in public places where interaction with others can occur. On a leash is the be... View
Sport 2

HiddenDragon - 2 hours ago
"In the ACT, only a public service cleanout would make a dent on the market, and that is hardly going to happen when governme... View
Capital Retro - 5 hours ago
There is absolutely no incentive for people to downsize. The ideal requirement for downsizing seniors is a single level town... View
bj_ACT - 7 hours ago
I’m surprised you don’t think the price of land has risen much in the last year. One half of a sub divided block near me... View
News 1

Anne Brechin - 5 hours ago
I’m not convinced society as a whole wants to jail 11 year olds. View
Coralee Rauber - 6 hours ago
At age 11 the kids know better. The age should stay at 10 to be sentenced View
Community 4

Paul Mathews - 7 hours ago
Looks like my Neighbour's BARKING DOG, went off BARKING 3 wks agao View
Alex SmilyLex - 9 hours ago
I had at least 3 encounters with dingos in the last 2 years from 8 trips to the top of the montains.... View
Opinion 4

@The_RiotACT @The_RiotACT
Meet Asanka and Chatura, the first Sri Lankan leopard cubs born in Australia, at the @national_zoo in Canberra https://t.co/8NWrwRCTD1 (55 minutes ago)