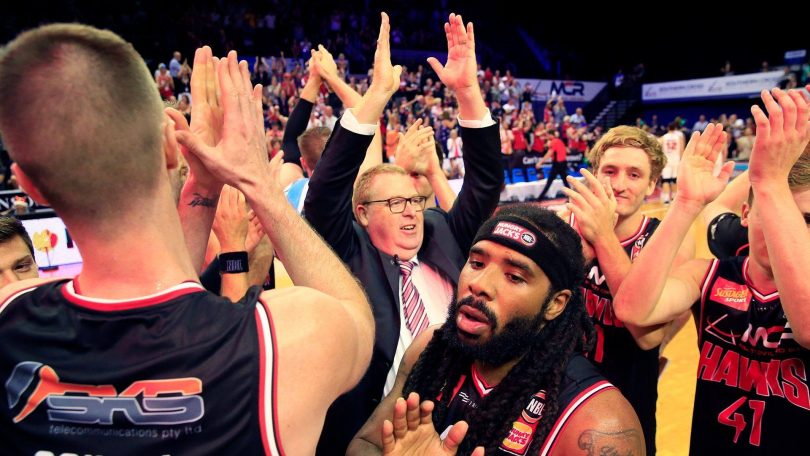 The NBL hopes to make the Australia Day game at the AIS Arena a yearly fixture on Canberra’s sporting calendar. Photo: Supplied by Illawarra Hawks.

The NBL has revealed plans to bring regular professional basketball to the nation’s capital, with discussions underway to make the Australia Day game at AIS Arena an annual event, beginning as early as next season.

Canberra hosted NBL action for the first time in over a decade on the 25 January with the game used as a litmus test to see if the ACT was a viable option to host more NBL action.

The league’s chief Jeremy Loeliger was curious to see how strong Canberra’s appetite for men’s professional basketball was, with over 3,300 fans showing just how hungry the capital is.

Despite 40-degree heat and the UC Capitals semi-final clash the night before, basketball fans showed up in force to watch the Illawarra Hawks’ one-point win over the Cairns Taipans, more than 1,000 fans than the previous night.

The NBL boss said the league now wants to see more professional basketball at the “underutilised facility of AIS Arena”, and wants the Australia Day game to become a yearly fixture on Canberra’s sporting calendar.

“There were a few nerves around the heatwave that went through Canberra on the Australia Day weekend but the fact that people voted with their feet and turned up in substantial numbers was very gratifying especially since I am sure a number of them had been to the WNBL semifinal the night before,” Mr Loeliger told Region Media.

“There is definitely a healthy appetite for professional basketball in Canberra which is great to see and long may it continue. I would love to see more NBL games played at the AIS and I love the idea of the Australia Day game potentially becoming a permanent fixture on the ACT calendar.”

The league is still evaluating the interest from local governments and potential corporate partners to see if the league’s long-term plans for Canberra are possible, but Mr Loeliger was hopeful the Hawks will come to an agreement with the ACT Government to move a couple of home games to the AIS Arena next season, including the Australia Day game.

Mr Loeliger said there would be “ongoing dialogue” between all parties in the coming weeks and months.

“There is a really strong opportunity here for Canberra to get behind the Hawks and make Canberra a second home town for them,” he said. “GWS in the AFL has demonstrated it can be done and I see no reason why we shouldn’t follow suit.

“I think it is the best way to progress those conversations about whether Canberra is a short, medium or long term prospect for an NBL team of its own.”

Mr Loeliger admitted the league was open to the return of the Canberra Cannons but admitted there was a long way to go before having talks about reinstating the Cannons back into the NBL.

“Having one successful game is very different than being able to stake a claim for a sustainable NBL team in the reinvigorated competition,” he said. “That was the first test and it was a tick and now we are looking at how to bring more content to the ACT.

“There are many conversations that need to be had about how we best deliver that content in a way that is economically viable, gives fans what they want and make sense for our teams and the competition.

“We are continuing to explore all possibilities but we are certainly not ruling the Canberra Cannons in or out at this stage.”

Heidi Blunden - 29 minutes ago
Absolutely not. View
Angela Davey - 30 minutes ago
You’d have much better government policy for young people and the climate if they could vote View
Glenn Hayman - 36 minutes ago
Old people and 'conservatives' don't want young people to vote. I wonder why? View
News 17

Glenn Hayman - 48 minutes ago
Kathleen Beck who's complaining? View
Kathleen Beck - 5 hours ago
All fun complaining until you need police. View
William Vass - 11 hours ago
Don’t show up for a break-in but worry about scooters. What’s wrong with policing in the ACT??? View
Opinion 1

nobody - 56 minutes ago
Well said Ian, and please keep asking that so-called Police Minister to explain himself. View
Opinion 86

TheSilver - 3 hours ago
No. And repeal the emergency powers act. View
Courts & Crime 4

Heidi Greenthumb - 4 hours ago
Why has it taken so long?? View
Capital Retro - 15 hours ago
"A light on an Army helicopter may have sparked the fire" I have never flown a helicopter but I had a light plane many years... View
News 33

Matthew Pez - 8 hours ago
Simon Adamson how is mowing your lawn at 8pm when there is still light a malicious crime? View
Robert Kearon - 11 hours ago
I would rather 8pm than 8am... not everyone is old and Karen View
Nathan Beck - 12 hours ago
David Cole it would be growing faster than they can cut it in this weather 🤣 View
News 74

Mamy Watts - 9 hours ago
Same outcome, they do nothing anyway. Look out insurance will go up with people making fake claims. View
Capital Retro - 15 hours ago
Some how I don't think insurers will cop this without conditioning the terms and conditions of their cover for home burglarie... View
Jenny Graves - 16 hours ago
Adam Rolls I presume you use your commonsense but don't actually harm them. View
Food & Wine 9

Of all the legislation that the Morrison Government has decided to prioritise, its voter identity bill is arguably the least...
News 94

@the_riotact @The_RiotACT
The veil of secrecy over #Kokomo's future has been lifted - the venue will reopen tonight as #Wilma, a progressive Asian BBQ restaurant https://t.co/rR6MPrlxji (43 minutes ago)