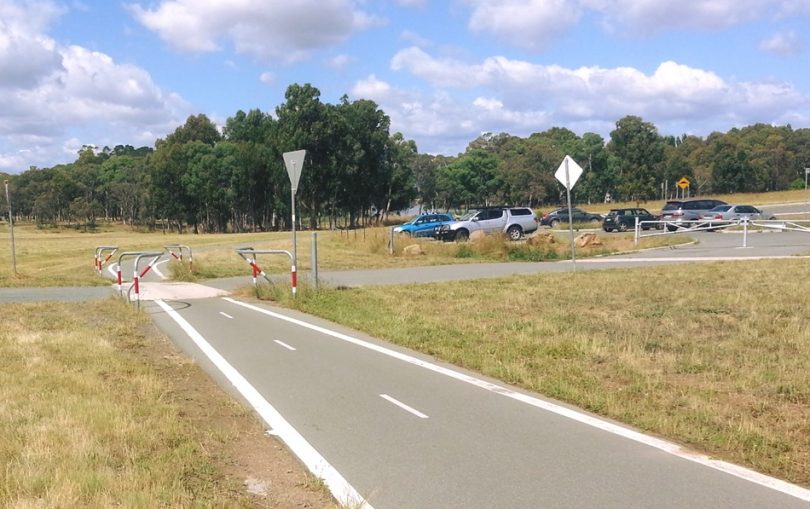 As part of the upgrades, these banana bars will be removed. Photo: Supplied by Pedal Power.

The National Capital Authority has started upgrades to a cycling path network around Lake Burley Griffin, with six locations around the lake to receive improvements.

Four separate locations at Yarramundi Reach, one location at Acacia Inlet, and one location on Dunrossil Drive, Yarralumla will be upgraded to improve cyclist safety around the lake.

The National Capital Authority (NCA) worked with Canberra’s biggest bike-riding community, Pedal Power and officials from Government House throughout the design process, with their feedback and input informing the final design.

The works across the sites at Yarramundi Reach and Acacia Inlet include the removal of existing ‘banana bars’, widening of the pathway to separate left and right lanes and the installation of safety bollards.

Works at Acacia Inlet also include remediating the bitumen roadway from the intersection of the cycle path crossing all the way to Black Mountain Drive.

“These Islands will provide an attractive and highly visible lane separation that will make our paths safer for people walking and riding bikes around the lake, while also serving as a functional barrier to prevent people from driving their cars onto these paths and using those paths to access the lake,” Mr Ross said.

“Pedal Power has been really pleased by the interest taken by the NCA in engaging with the Canberra cycling community to develop solutions that would work for all path users. We think Canberrans will be really pleased with the outcome.

“While the work is being carried out, bike riders will need to be patient, slow down, give priority to pedestrians and exercise some caution using the temporary paths,” Mr Ross said.

Temporary path diversions will be constructed to allow cyclists to negotiate the areas of work without impediment, with the paths being removed once the works are completed, which is expected by 30 June 2019.

There needs to be a cycle path from Chisholm to Hume than onto Fyshwick. It’s very dangerous for the many cyclist riding next to traffic on the Monaro Hwy

They'll ride on the road next to it anyway

Emily Lander-Clarke - 31 minutes ago
90 days at the very least, I would imagine it will probably roll on for far far longer than this... View
Deirdre Mione Wilson - 2 hours ago
It went from January 1918 to December 1920. So two years and then it just disappeared. Most deaths were in the young, up to 4... View
Ruth Brown - 3 hours ago
Boyo Birch No antibiotic will cure COVID-19. Antibiotics only kill bacteria, they have no effect on viruses. That's why docto... View
Opinion 20

Julie Macklin - 60 minutes ago
Ruth Brown What upgrading and improving paths for people to cycle does (and where this has been done shows this), is get more... View
Rob Thomas - 2 hours ago
The comments section of facebook posts are direly unsupported. Perhaps people can help fill them? View
Ruth Brown - 3 hours ago
Will cyclists actually use the bike paths if they get renovated or will they continue to risk life and limb (their own) by in... View
Community 6

Bec Pollock - 3 hours ago
Karen are you really that ignorant? View
Jane Rosewarne - 15 hours ago
Exactly why other people are now struggling to obtain the basics. Some people have way more than they need, while others are... View
Karen Burt - 17 hours ago
How on earth can anyone’s cupboard be bare The excessive shopping people have been consuming is outrageous View
News 7

MERC600 - 4 hours ago
JC the coffee shop in the Jerra shopping centre is situated in the open inside a large space , with Woollies one side and the... View
News 11

Andrea Kerr - 6 hours ago
Angela Moore does it matter really. Use whatever spaces they can to try and save lives. View
Daniel Howell - 7 hours ago
Where are they going to put it View
Dragica Ivanovic - 11 hours ago
Yup for 5G victims. View
Community 15

me heretoday - 12 hours ago
Is anyone else enjoying this wet weather as much as I am. View
News 7

Two men have been charged by police following separate incidents where they threatened and coughed or spat on people while...
News 31

Triathlon festival to go ahead despite closure of Lake Burley Griffin

Push to separate walkers and cyclists on busy lake paths

@The_RiotACT @The_RiotACT
Work to begin on new primary school in Googong after almost two years of delays https://t.co/YSSrVpflRK (26 minutes ago)