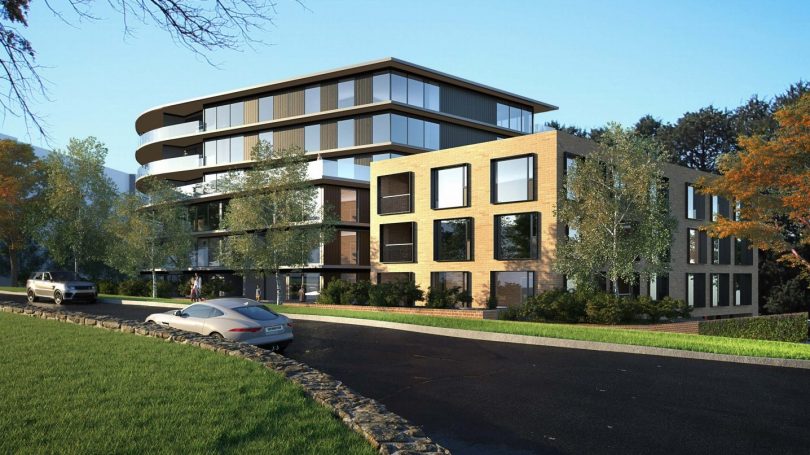 An artist’s impression of the proposed 70-unit development from the DA. Photo: Supplied.

Morris Property Group has already submitted development applications totalling 412 units for the three blocks it purchased at auction in March, and now Bisa Property, the company behind the East Hotel, has lodged their application for the fourth and final block.

The ground-level apartments will have private courtyards.

The plans say the sloping site creates part-storeys that will be used mainly for parking.

The two levels of basement car parking will hold 128 spaces for residents and seven for visitors, with access via a single driveway on Evans Crescent.

A landscaped area with deep-rooted trees near the northern and north-eastern boundaries will provide on-site amenity for residents, as well as privacy between the development and the neighbouring Block 21.

Plantings are also proposed along front boundaries – particularly along Light Street (south-western boundary) and the frontage to the public footpath along Block 20 connecting Light Street to Canberra Avenue, which Bisa will build as a condition of the purchase.

Bisa is also required to upgrade public areas adjacent to the site including parts of the Evans Crescent and Light Street verges.

An existing stormwater easement near the north-east boundary of the site will need to be removed and services relocated within the Evans Crescent verge.

A regulated tree is also slated for removal and the proposal will go to the Conservator of Flora and Fauna for approval.

I wonder how many will be public housing?