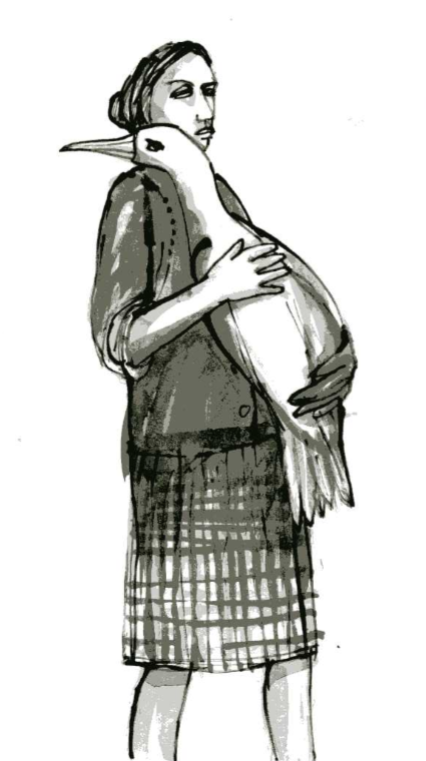 When the much-loved bronze sculpture Stepping Out (The Lady in Pearls) was stolen in 2016, the local community was left devastated.

The ACT Arts Minister, Gordon Ramsay MLA, said many people felt it was like “losing a loved one, she was such a part of the community”.

The sculpture was unable to be recast since the moulds no longer exist, so a community consultation with Hughes residents was undertaken in August and September last year to identify what the local community felt would be a suitable replacement for the beloved Lady in Pearls.

As a result of the consultation, a bronze female figure with a whimsical pose holding a large bird has been chosen as the new artwork for the Hughes shops.

Artists Suzie Bleach and Andy Townsend have been chosen to create the new sculpture for the Hughes community and have drawn up concept art of the new statue.

Mr Ramsay believes the design by Bleach and Townsend meets the Hughes community’s wish for an artwork that is nostalgic, imaginative and playful.

“Hughes residents also have a strong sense of connection to their natural surroundings which is also represented in the artwork – a single bronze female figure, cradling a large bird,” he said.

“The Government has been working hard to ensure that any new artwork reflects the values of Hughes residents and can not only fill the gap left by Stepping Out, but can create its own place in our shared history.”

Bleach and Townsend are highly regarded nationally and have strong connections to Canberra and most recently exhibited artworks locally at Floriade in 2017 and at the Contour 556 sculpture exhibition in 2016.

A number of their works are also in the ACT Government public art collection including La Perouse located at the Red Hill Shops.

The new artwork will be developed over the coming months and is expected to be installed in early-2019. It will feature reinforced footings and fixings to mitigate against theft.

Kari James - 27 minutes ago
I would find this job incredibly difficult and stressful - great work to the team! View
Natalie Griffiths - 42 minutes ago
I spoke to them yesterday and they lady I spoke to was amazing and had a laugh with me. Well done to them all View
Suzanne Tunks - 53 minutes ago
Mark Scarborough well that should be fine but always wise to read up on it first or give the hotline a call 😊 View
Business 2

Penelope Rose - 29 minutes ago
No money means can't pay rent, mortgage, electricity, etc, no food. Homelessness isn't something anyone wants. Business peopl... View
Sher Bee - 4 hours ago
Temporary benefits for the fully vaccinated would be a nice step. As key percentages are reached the benefits can be expanded... View
Business 107

@The_RiotACT @The_RiotACT
Dobinsons is on a roll and bringing their baked goodies to a street near you. Find you how you can get your fix to make lockdown a little sweeter https://t.co/z8IGWiEGyy (12 minutes ago)