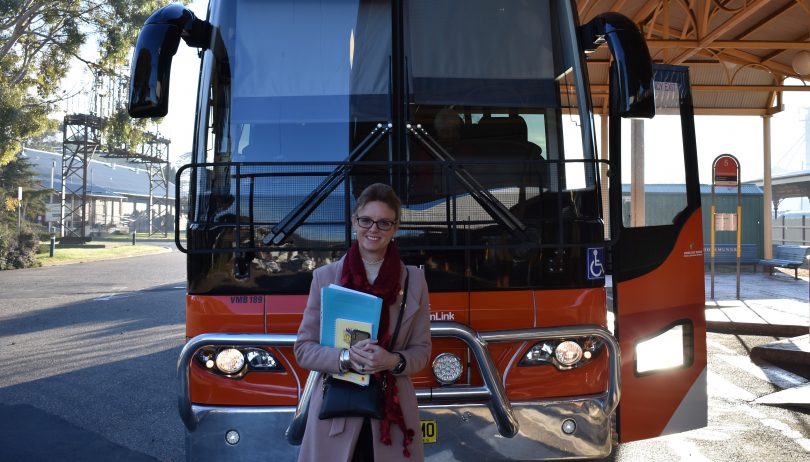 Member for Cootamundra Steph Cooke says new bus trials between regional areas and Canberra will make it easier for residents to get to important medical appointments, buy groceries and stay connected to family and friends in outlying towns. Photo: Supplied.

A new bus service is being trialled to connect isolated communities in the NSW Central West and NSW South West Slopes with essential services in the ACT, with stops including Civic, Canberra Railway Station and Canberra Hospital.

The return service is set to run from Wyangala – home of popular summer playground Wyangala Dam – from 7:30 am each Friday.

It will stop at the small communities of Darbys Falls, Cowra, Koorawatha, Bendick Murrell, Murringo and Boorowa before heading to Canberra, arriving at Civic at around 10:55 am, Canberra Railway station at 11:05 am and Canberra Hospital at 11:20 am.

The return service will depart Canberra Hospital at 2:30 pm, following the same route to reach Wyangala at around 6.20 pm.

A similar bus service will also operate from Tumut to Wagga Wagga each Wednesday.

This bus services will depart Tumut at 8:00 am, with stops at Adelong, Grahamstown, Tarcutta and Ladysmith, before arriving at Wagga Wagga Station at 10:00 am, Wagga Wagga Base Hospital at 10:04 am and Wagga Wagga Marketplace at 10:15 am.

The return trip will follow the same route with the first departure stop at Wagga Wagga Marketplace at 2:25 pm and the final stop at Tumut at 6:40 pm.

All services are a NSW Government initiative.

Member for Cootamundra Steph Cooke said the Wyangala-to-Canberra service, operated by LiveBetter community services, will be a game-changer in the way locals are able to move around, making it easier to get to important medical appointments, buy groceries and stay connected to family and friends in outlying towns.

“We are so excited to welcome this service because it will give our more isolated communities greater access and connection to vital services in larger centres,” said Ms Cooke.

“These trials deliver on our election commitment to provide better transport connections for small communities such as Tumut, Conargo, Ashford, Boorowa and Trunkey Creek,” he said.

“For some of these communities, this is the first time they’ve had access to a public transport service and it will really change the way many people move around the regions.”

Transport for NSW will monitor feedback throughout the six-month trial, and communicate with the community on any changes.

These services will bring the total number of trials under the initiative to 13 across the state.

Timetables can be viewed at the Transport for NSW website. Bookings need to be made directly with the operators.

Concession fares are available, including a $2.50 RED ticket.

Sounds like a good idea, though the service to Canberra should probably allow maybe half-an-hour to an hour extra time before departing because it’s a bigger city, wait times for appointments and time to see shops and have lunch.

I don’t see Young there? Used to be on a train line many years ago but no longer.

Is there a service Cooma to Canberra?

Vline also run 3 services a week to Cooma. They leave at 7.40am on Tuesdays and Fridays and at 930am on Sundays. These services go onto Bairnsdale

Not much time allowed in Canberra. Needs a couple more hours.

Jason Malcolm - 25 minutes ago
Natalie you'll be fine!!! View
Gaby Langhorn - 1 hour ago
Denise Wilson could be good for you. View
News 47

Scottie Roberto Avelia - 41 minutes ago
Hardly zero emissions when you consider the lifecycle (which the Earth does)... These lying claims make morons feel good but... View
Food & Wine 20

Heidi Dreyer - 44 minutes ago
Zak is back working so any night but Sunday or Monday. Miss you too!!!!... View
Faith J. Humphries - 1 hour ago
Laura Shelley want you go to lunch there with me? View
K Jane Brook - 1 hour ago
Heidi Dreyer I'm in. Any day but Wednesday. Miss you. View
Opinion 54

Julie Macklin - 51 minutes ago
Vicki Nunn No, no, my shoes need their soles 😮. View
Scottie Roberto Avelia - 57 minutes ago
What we need are MORE bikie gangs, the SIX we have just aren't peddling enough drugs and gun crime, leading to more hi-speed... View
Marc Edwards - 1 hour ago
Robert Hawes the average block for a sin feel is like 350m2 which is tiny as. View
Food & Wine 6

Mai Linh - 1 hour ago
Lynn Stape you don’t have to. But many others do because we’re a multicultural society, because there’s a vibrant Ameri... View
James Shaw - 3 hours ago
Lynn Stape because some people are American?... View
Property 3

Gabriel Spacca - 1 hour ago
Pretty sure he is not the target demographic for TikTok. View
Larry Appley - 2 hours ago
A publicity stunt from a former radio announcer? Who would have thunk? View
Nathan Lofthouse - 2 hours ago
Why is it the tinfoilhat mob always say 'do some research' I don't need to research tiktok. its tiktok. I expect everything o... View
Property 25

Overdevelopment in Canberra is shaping up to be a key election issue after it was revealed that the lion's share...
News 20

@The_RiotACT @The_RiotACT
Just days from the Eden-Monaro by-election, what is motivating voters? Region Media’s journalists asked people across the electorate about the issues that would sway their votes https://t.co/KPzWiwk20n (1 hour ago)

@The_RiotACT @The_RiotACT
@NatGalleryAus is having a mega-clearance sale and it's your chance to pick up memorabilia from great NGA exhibitions as well as spectacular pieces from local artists https://t.co/iA3TbWyTff (2 hours ago)