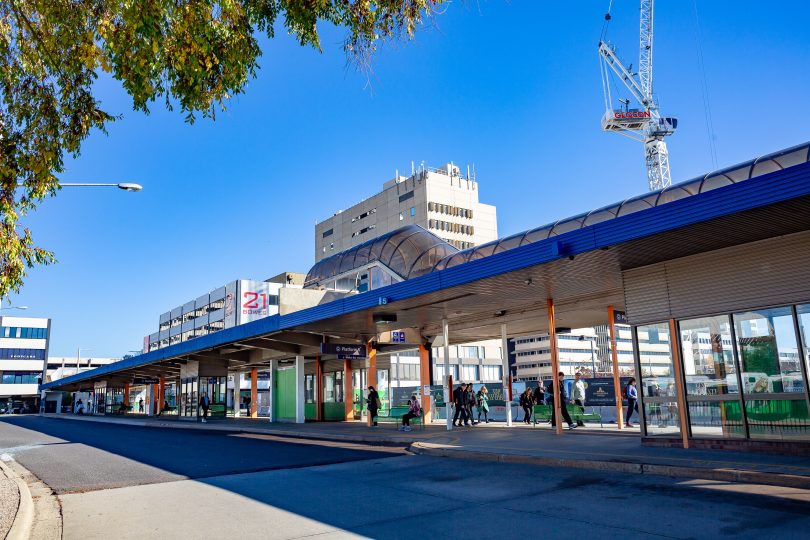 A new Canberra Institute of Technology campus will be sited in the Woden Town Centre alongside the new Transport Canberra Interchange, the ACT Government has announced.

Both facilities will be built on and adjacent to the site of the existing Woden Bus Station and the former Woden Police Station site on Bradley Street.

Chief Minister Andrew Barr said CIT Woden, which will eventually replace the Reid campus in the City, would cater for 6500 students and have a focus on cyber, technology qualifications and service skills, as well as those for business, creative industries, hospitality and tourism.

It will cost between $100 million and $250 million, with the final figure known once scoping work is complete.

Mr Barr said that with a site footprint of 5000 square metres (.5ha), the shape and height of the building would depend on how much of the land was used for green space and other facilities, such as a sports facility, that might be co-located there.

The CIT building itself would have a gross floor area of 20,000 square metres which would make it the second biggest CIT site in Canberra after Bruce.

Construction is likely to be complete by the mid-2020s. The CIT Reid campus will continue to operate in its current capacity until the Woden campus is complete.

Mr Barr said plans for UNSW Canberra to establish a presence in the Parkes-Reid precinct were progressing.

“The new CIT Woden campus will provide students with the skills they need, for the jobs they want,” Mr Barr said.

The Woden Valley Community Council welcomed the decision saying it would be positive for the Town Centre, and bring energy and activity to the area with flow-on effects for small business.

Council president Fiona Carrick said the location meant the campus would be accessible for students, especially with light rail extending to Woden.

But the council would have preferred a larger site such as the 1.5 hectare surface car park north of the Bus Station next to the Hellenic Club.

The smaller footprint meant it would be a vertical campus without not as much room for green spaces and cultural and recreational areas, she said.

The Government foreshadowed in June that it was considering the Woden Town Centre for a new CIT campus as part of a shake-up that would see it replace the site in Reid.

“We will continue to invest in tertiary education in this city, with this new campus strengthening CIT’s vocational education and training network,” he said.

“The prospect of a new, state-of-the-art Canberra Institute of Technology campus is incredibly appropriate for the advancement of Vocational Education and Training (VET) in Canberra and the region,” she said.

“CIT welcomes the ACT Government’s announcement as it reflects its commitment to the best possible future for vocational education and training in Canberra and the region and recognises the essential role CIT plays as the premier VET provider in the ACT providing skills for a modern workforce.”

Mr Barr said businesses in the Woden Town Centre were also set to benefit from the construction of the campus in the precinct after the loss of Federal Government jobs in recent years.

“The Town Centre has been hit by successive Liberal Governments that continue to take jobs out of the region,” he said.

“Since June 2013, 1,635 Australian Public Service jobs have either been moved out of Woden or cut under the watch of conservative governments. This includes agencies recently moved out of Woden as part of the Federal Government’s decentralisation agenda.”

Mr Barr said that in contrast the ACT Government had been stepping up and was investing more to support Woden businesses, including the relocation of Access Canberra in 2016, ACT Health in 2017, the upgrade of Phillip Oval and better public spaces in the town centre.

“As part of Labor’s plan for Woden, we will continue building and improving the infrastructure residents rely on, support local businesses and create more good jobs,” he said.

“This includes the single largest expansion of the Canberra hospital campus, a new Woden community centre, the extension of light rail to Woden – and the construction of this new CIT campus.”

The former Woden CIT complex on the corner of Hindmarsh Drive and Ainsworth Street is to be demolished despite calls from the Council that it be refurbished as part of the Canberra Hospital precinct.

Ms Carrick said it was disappointing to see the area lose a community facility in such a growing area.

I guess that will allow them to sell off Reid campus?

Brad Williams UNSW are going to build a university campus on the Reid CIT site. Was announced a while back.

“the new Transport Canberra Interchange”
When is that being constructed?

Good stuff. I’m not sure how they will fit so many things in such a tiny space, but Woden has lost so many community spaces, sports facilities and education centres that it really needs some reversal of fortunes. Better be a better CIT than the tiny Tuggeranong CIT which is only two floors of an old Government building, and offering a limited number of students a very limited range of courses (none of the courses available are what you would traditionally associate with TAFE and apprenticeships training) They only offer business admin style courses at Tuggers CIT. Its more like a few training rooms than a CIT.

Jeff Smith 4500 students apparently so should be a few floors

This is good news for #Woden but the Chief Minister should also acknowledge that they also moved ACT Public servants out of Woden and closed the original CIT. This had a major impact on business confidence in the Woden Town Centre.