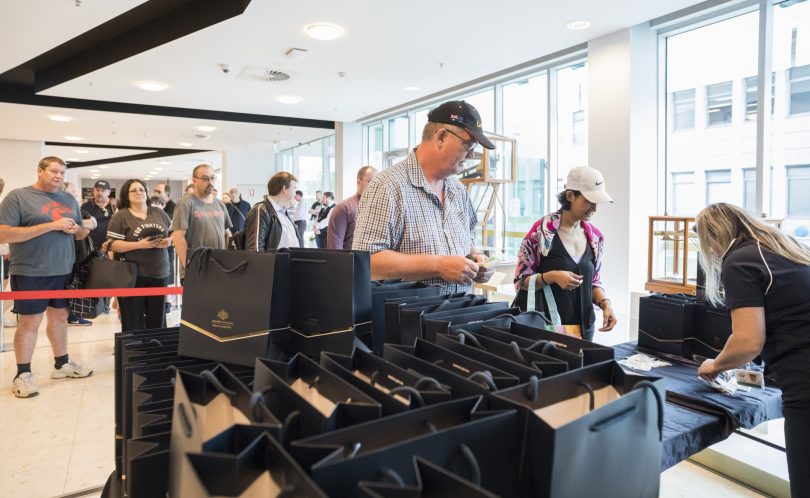 Collectors line up to change their change for the freshly-minted $1 Qantas coin at the Royal Australian Mint. Photo: Michelle Kroll, Region Media.

Australia’s oldest airline Qantas has been featured on a $1 coin to celebrate its centenary, with people queuing up at the Royal Australian Mint on Monday to snap up the new addition.

The Mint hosted a pop-up stall where keen coin collectors were among the first to swap their cash for the freshly-minted circulating coins.

The coin will be legal tender and people should start seeing it straight away.

“Beyond Qantas being an iconic Australian organisation, we’re really looking back at 100 years of aviation,” Mr Cartwright told Region Media.

“Qantas was one of the pioneers so we look at how society has changed and really benefitted a big country by opening up aviation and tourism and trade, firstly across Australia and then to the rest of the world.”

A team of designers at the Mint worked with Qantas to design the coin that features a depiction of a plane flying through the number 100.

The plane is a stylised Boeing Dreamliner, the newest addition to the Qantas fleet. The decorative line pattern on the number 100 emulates fingerprints, signifying that Qantas is a part of Australia’s national identity.

Mr Cartwright said the design is a reasonably simple one that will withstand the rigours of circulation, while there is a range of special coins that includes a set of coloured $1 coins that comes in a jet engine-shaped tin and tells the story of Qantas in Australia. There is also a gold plated 1 kg version that will be a very limited edition release. 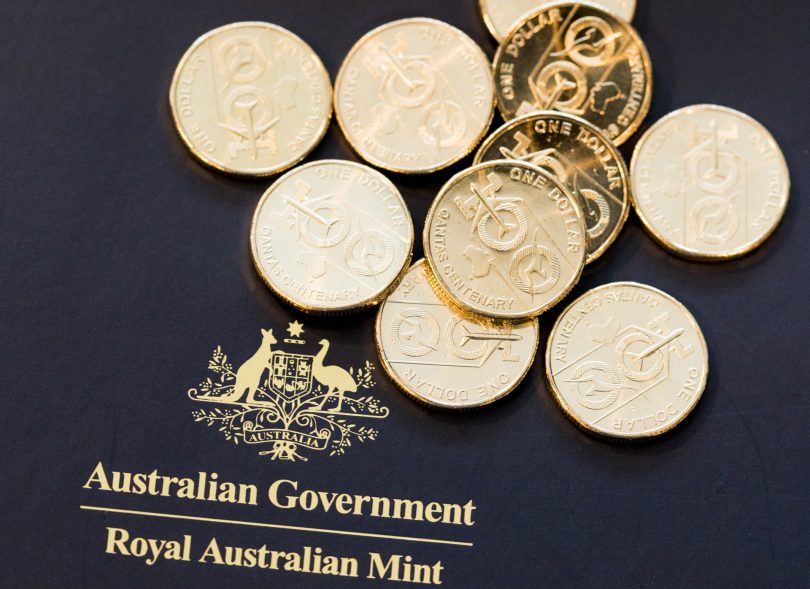 “Circulating coins are designed to be made in high volumes, so we’re going to see five million of these coins go into circulation. This one is striking in its simplicity and also shows the impact that Qantas has had on so many lives over the years,” he said.

“We know that about one-in-four Australians collect coins, so for us it’s important that people can come and grab these freshly minted Qantas coins.”

One of those to line up early was coin collector Julie Camilleri, who had travelled from the Riverina area near Wagga Wagga to get the coins for herself and friends.

Ms Camilleri has been collecting coins for more than 25 years and said the design will become part of her collection, which contains coins worth many thousands of dollars.

“I really like the design,” she said. “It’s got some intricate detailing but they haven’t overdone it, they’ve kept it simple and it gets the message about exactly what the coin is for.”

“Last year, we lost all communications in our town for a day or so, and we had no mobile service and the ATMs didn’t work, so we had to just make sure we had cash like the old days.”

However, Ms Camilleri said there are plenty of coins in her collection that she will never part with, including a 2012 Red Poppy roll of coins and a mob of kangaroos $1 coin with an error from when the coin was struck using a 10-cent die, which can be identified by the wide double rim. Ms Camilleri found the coin in loose change. It is now estimated to be worth more than $1000.

Lilly Walter - 9 minutes ago
Wayne Williams, bloody oath they do. More manipulative and cunning women are. If I had the fund or patience to create a men o... View
Wayne Williams - 56 minutes ago
Lilly Walter tell that to the recently fatherless young fella in Brisbane, women commit family violence also View
Abbey Snell - 56 minutes ago
Samantha there is a non-gender specific sleepbus. I think this is a situation for equity. A large cause of homelessness for w... View
News 3

paservank - 1 hour ago
...or get rid of all the cars? (an equally stupid and self-centred idea) View
chewy14 - 5 hours ago
It's ridiculous that the government is deliberately creating situations that expose these vulnerable road users to harm yet t... View
News 15

astro2 - 5 hours ago
If you would prefer to take your own private motor vehicle to the shops then you may continue to choose to do so. However the... View
Deborah Gale - 6 hours ago
Flannie! View
show more show less
*Results are based on activity within last 7 days

Sitting on a bunk bed in Australia's first sleepbus for women - before a single homeless woman, her children and maybe...
Opinion 35

@The_RiotACT @The_RiotACT
Fancy a gooey, sticky, chocolate pudding? How about a cleansing ale or hearty casserole? @CanberraSCC members can help local charities like @karinyahouse with every bite https://t.co/ogAbd4GfVL (14 minutes ago)

@The_RiotACT @The_RiotACT
The ACT will receive up to 3000 more doses a week of the Pfizer COVID-19 vaccine and has begun accepting appointments for a second vaccination hub to be located in the airport precinct. The new centre will open Tuesday week https://t.co/X2SJ2ittyD (36 minutes ago)