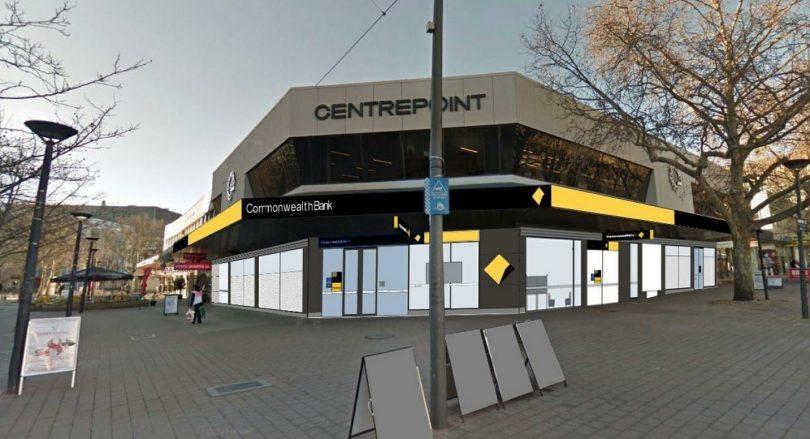 What the new Commonwealth Bank will look like according to an artists’s impression from the DA. Photos: Supplied.

In a boost to Civic, the Centrepoint building in the city will soon be home to a new Commonwealth Bank branch, with plans and an application to change the lease lodged.

The bank plans to take up the 676 square metre ground floor tenancy in the two-storey premises on the corner of City Walk and Petrie Plaza, and the landlord has applied to vary the lease to allow for a financial establishment on the site.

Nearly $200,000 worth of works are proposed to re-brand the site with new signage, as well as installing new doors on Petrie Plaza, providing new shopfront glazing and facade tiling.

Seven signs will be illuminated, including two wall signs and a 24/7 banking sign for the after-hours lobby where ATMs will be sited. 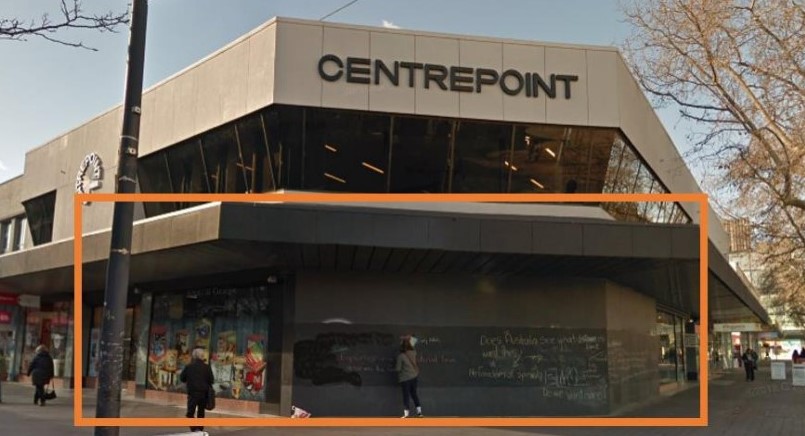 The Centrepoint building and the where the Commonwealth Bank shopfront will be.

There will also be a non-lit Commonwealth Bank sign outside.

The proposal says the entrance to the after-hours lobby will be appropriately lit and highly visible so that people cannot loiter or enter without being seen.

It says the lobby has been designed to be secure from potential thieves, including ram-raiders, or those wanting to use it for other purposes.

Customers will be able to enter from both City Walk and Petrie Plaza. Two internal LCD screens will show still advertisements.

“The proposed Commonwealth Bank operation has been designed to encourage pedestrian use and activate the street frontage at ground floor level,” the proposal says.

The new bank branch will be a welcome addition to the area which has suffered in recent years, losing custom and businesses as the nearby Canberra Centre dominates the city’s retail sector.

Awful part of town. Beset by chuggers, homeless, and some arsehole that keeps feeding the pigeons (so there's bird droppings everywhere).

Just how you'd expect a big bank to treat its customers. I'm glad I'm not one of their customers.

A bank? A bank thats just been found guilty of over 70 cases of insurance fraud? What a load.

“The new bank branch will be a welcome addition to the area which has suffered in recent years….”

…. and a much handier (than the present Branch) location for Civic chuggers.

Wasn't there a bank branch in there in the 90's?

Geoff Richardson don’t think so. There was one on the other side of city walk though.

Are they closing the current branch, about three minutes walk away from Centrepoint, on the corner of London Circuit and Ainslie Avenue...?

I was wondering the same thing.

I’m glad a bank is opening what looks like a decent sized branch. Hope this means they aren’t closing other city branches at the same time.

The trend is to create “cashless” banks. Citibank have already done it and possibly this will be the first cashless one for the Commonwealth Bank who are all for it according to this white paper they recently released: https://www.commbank.com.au/content/dam/commbank-assets/business/industries/2019-06/CBBUS2035_Whitepaper_190605.pdf

CBA used to be located up the street. They closed years ago when the bank down sized. Bags to go was a recent tenant in the old location.

Just what the world needs - not.

Nice to see Banks still opening branches, although they're obviously doing it so they can close their Canberra Centre branches to save money on presumably astronomical leases and open in cheaper locations.

Very interesting. I occasionally used the Comm bank at Mawson, but they shut it. They left 2 ATM’s to use, then it went to one. And now there’s none.

Woolies at Jerra had a Comm ATM, but it’s gone. And their ATM at the Hyperdome I used has scarpered.

The closure of the Mawson Branch puzzled me a bit, as Goodwin are re-building their retirement village at Farrer, and it’s going to be huge with a lot of retirees needing access to a bank you would think.

And finally there was a ATM inside the Erindale shops, which was always busy, but it’s also gone. But there is still one outside, but not as convenient as the one they had inside. … Is this their attempt to make us a cashless society. Just tap your card and off you go ?

I’m guessing this will be a relocation of the branch that is on London Cct opposite the assembly.

Chris Prentice - 20 minutes ago
Matthew Soall But it is a business. View
James Vetos - 49 minutes ago
A committed centre of learning excellence... Nope, a one trick business struggling under a poor business model. Should be ash... View
Liam O'Toole - 3 hours ago
Emphasis on international students. ANU is discovering the results of putting all your eggs in one basket. View
News 22