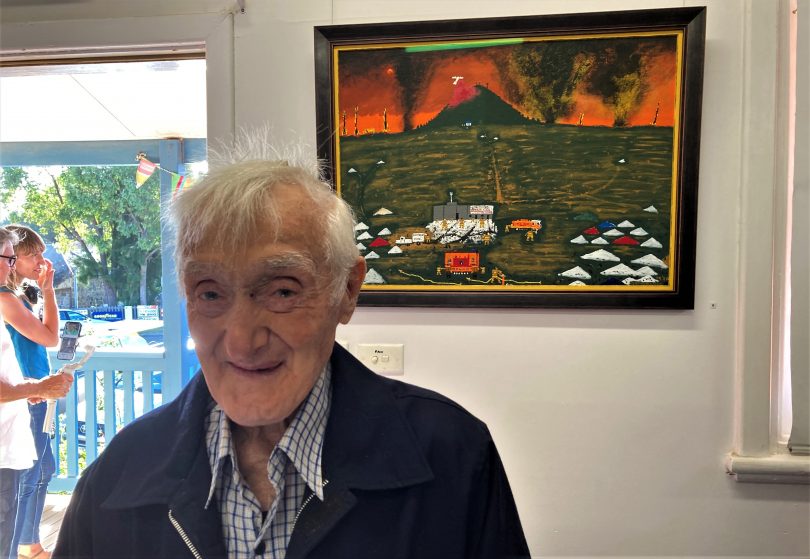 92-year-old Jack Featherstone is a much loved artist in Braidwood. Photo: Alex Rea.

An exhibition showcasing the work of Braidwood artist Jack Featherstone will open at Tuggeranong Arts Centre on Saturday, 6 February, 2021.

Titled ‘Jack, John and Kempsey’, the exhibition features paintings from the artist’s private collection and the collections of family, friends and local collectors across a span of 62 years, between 1958 and 2020.

Jack is a well known figure in Braidwood, seen striding up Mount Gillamatong daily with the agility of someone with far fewer than his 92 years.

Behind his twinkling eyes is a lifetime of learning and observation. As a self-taught artist, Jack was first described as a ‘magic realist’ in 2010 by Australian artist Nigel Lendon. It was used in the title of his solo exhibition, Jack Featherstone: Magic Realist, at the ANU School of Art & Design Gallery in 2010.

Jack has painted since his early 20s, when he began to diarise his life in paintings. His artwork, which primarily features people in the landscape, are based on real events but imbued with subtle otherworldliness. 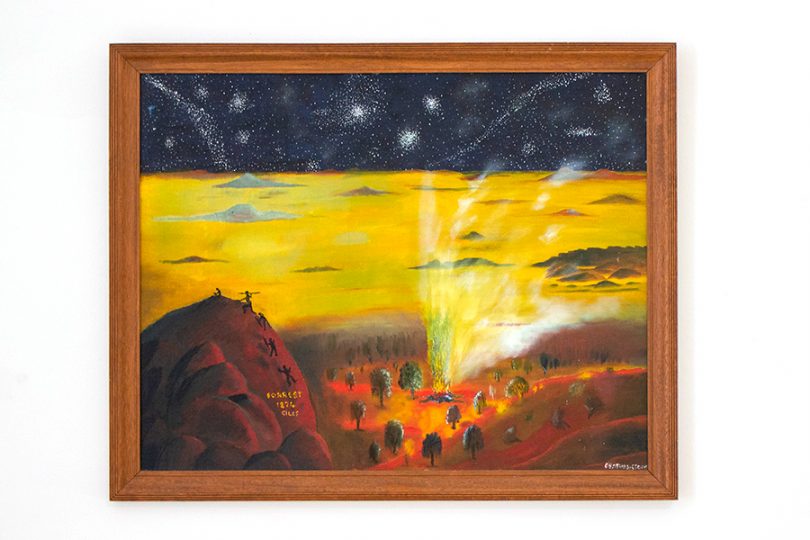 Jack’s Braidwood cottage is filled with interesting fauna and flora specimens, newspaper clippings, and twigs collected on his walks, reflecting his deep and wide ranging interests in science and history, which in turn is manifested in his artistic subjects.

Included in the exhibition are paintings from his David Series, David’s Nightmare and David’s Prayer, painted during a research trip to the Northern Territory and Western Australia in 1958. The works depict time spent travelling in an old Volkswagen through Alice Springs, Docker River and Warburton, and his journey through the outback undertaken as part of a dental research trip. His local tracker, David, features throughout the series of paintings.

Also included are representations of family accounts from World War I, such as The Evacuation of Gallipoli (2014), and World War II, such as The Battle for Stalingrad (2011). In addition to these challenging narratives, many of Jack’s paintings capture moments of joy in the landscape.

The Evacuation of Gallipoli, by Jack Featherstone. Photo: Supplied.

Alongside Jack’s works in the exhibition are two commissioned pieces by filmmaker Anna Georgia and Jack’s son, writer Nigel Featherstone. The works reflect on Jack’s life – his achievements, his practice as a dental surgeon, his roles as a painter, as a father, a nature enthusiast and a much loved member of the Braidwood community.

Anna spent the summer visiting Jack at his home, with her camera becoming both an audience for his storytelling and a confessional for his deepest reflections. The resulting film provides important personal and historical background for interpreting Jack’s paintings, and contextualises his personal existential significance of gaining institutional recognition as an artist.

“To represent somebody else’s life and sensibility through the camera is a most delicate, absorbing and rewarding challenge,” says Anna. “Jack is 92 years old with the vividness, enthusiasm and verbosity of a [Charles] Dickens character. Having lived by himself on the edge of the small town of Braidwood for nearly 25 years, Jack engages with other people selectively, preferring to spend most of his time ‘solo but not lonely’ reading books, listening to music, walking in nature and painting.” 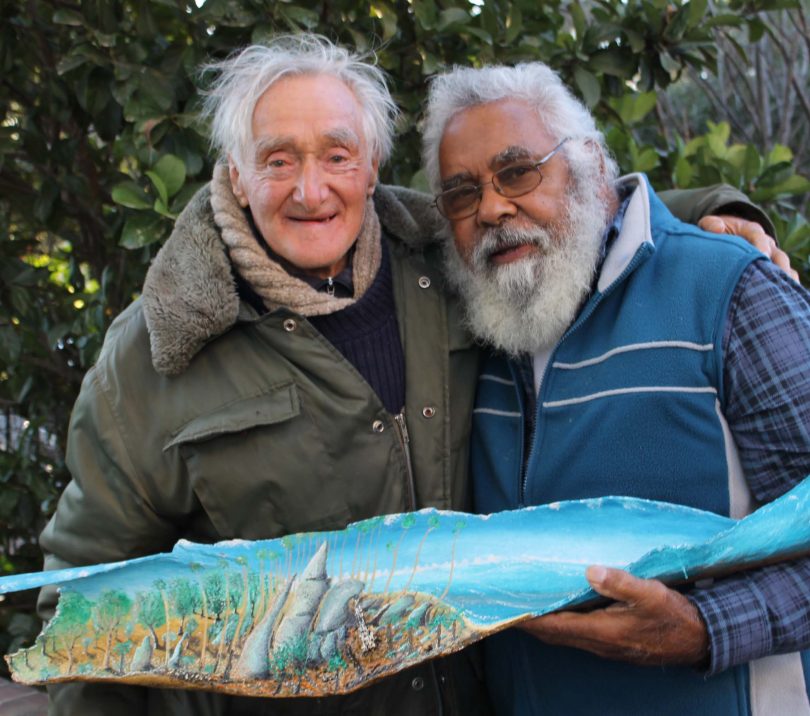 In the introduction to son Nigel’s commissioned piece of writing, The Gift of a Father, he writes: “I have told friends that I know what sort of old man I will be because I have been following my father’s life: ‘In 40 years, I’ll be him.’ With that they nod and smile, a little alarmed. Yes, my father and I are similar people so what exactly am I trying to find? Perhaps I am not trying to find anything; I want to interact with him in a deeper way, to better understand him, to experience the way he lives in the world, to know him – before it is too late.”

Among other enquiries into art, life and connection, Nigel asks: “What makes a man spend so much of his life producing art? What is he hoping to achieve, or understand? Perhaps, for my father, it is nothing more complicated than a desire, or need, to document – ‘I went for a bushwalk and this is what I saw.’ Or he may simply enjoy making things, as do I – I write, he paints.”

Jack, John and Kempsey will be officially opened by ACT Minister for the Arts Tara Cheyne at Tuggeranong Arts Center on Saturday, 6 February, at 3:30 pm.

Boweavil Kat - 14 minutes ago
From what I can see, they don’t do anything anymore while treating those that need the service like criminals trying to con... View
News 8