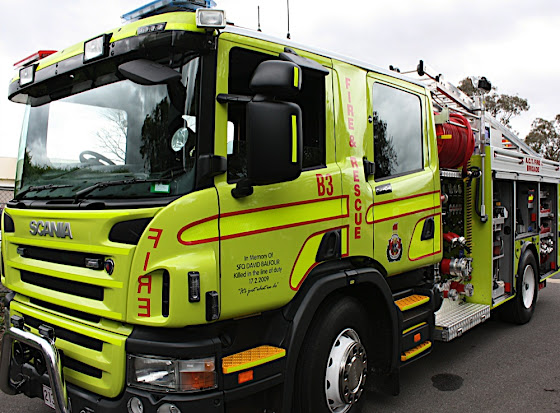 Simon Corbell has announced the latest addition to the Fire Brigade’s fleet has been named after David Balfour:

I am very pleased to have been given the opportunity to commission the David Balfour Fire Pumper in honour of the late David Balfour,” Mr Corbell said.

“Mr Balfour, a senior firefighter (qualified) in the ACT Fire Brigade, was tragically killed in the line of duty while on an ACT taskforce sent to help out during the Victorian Bushfires in February 2009,” he said.

“The ACT Fire Brigade decided to dedicate the new fire pumper to David in his memory with the full support of the Balfour family,”

David’s widow Celia, his children and other family members were in attendance for the Commissioning ceremony today at Phillip Fire Station.

Could someone from the firies union post a message here saying where we can but the new calendar? I really want one!

And what a fine piece of machinery it is…

Just be careful, you know what happened list time you posted a picture of a fire engine.

RIP David Balfour and best wishes to his family. They say you die twice: first when you die physically, and then again when the very last time your name is said. That interval is centuries, even millennia, for the famous of course.

I’m glad this will contribute to a long time before David Balfour’s “final death”.

Jenny Graves - 2 minutes ago
Kit Oates those people who get impatient, in my experience, tend to tailgate. If you don't, then that's great and I apologise... View
Alex Dee - 45 minutes ago
You need to get out more. View
Francesco Merlino - 53 minutes ago
Alex Dee Alex Dee I hope you are right! View
event 1

Dom Polegubic - 21 minutes ago
This is a good link to an intro to Croatian wines: https://winefolly.com/deep-dive/introduction-to-croatian-wines/... View
Opinion 11

Deepak Ramanath - 41 minutes ago
James Forge Wow, where is this? View
James Forge - 42 minutes ago
Deepak Ramanath the government is about to demolish an overpass and replace it with yet another set of traffic lights View
Kylie Wylie - 1 hour ago
Residents of Lyons suffer badly every work day. Every main road is gridlocked with rat runners that mostly won't even let oth... View
Lifestyle 2

inverted63 - 51 minutes ago
Oh dear. ...Makes accusations about made up statistics & then cites a total of 3 successful female artists across a whole ind... View
Breaking 1