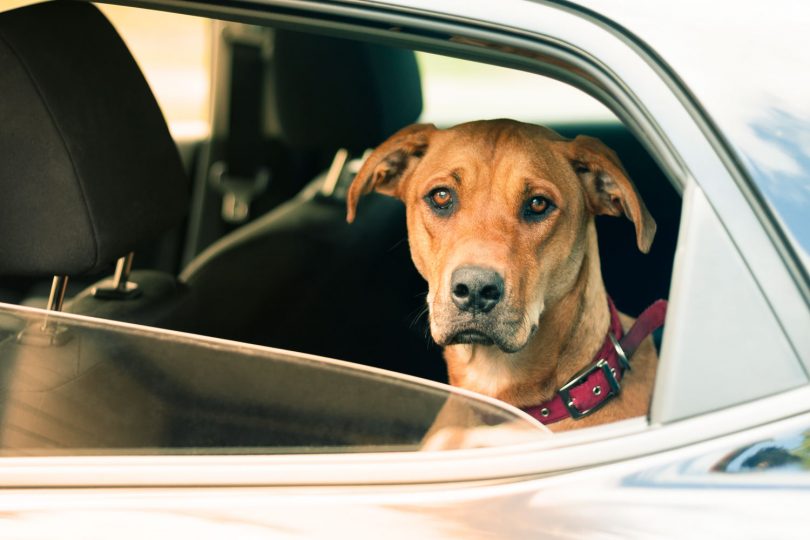 New laws will mean leaving an animal unattended in a car could prove costly for the owner. Photo: RSPCA ACT.

The number of dogs permitted to be walked at one time may be limited to three to minimise the possibility of dog attacks and people who leave their animals in cars face heavy fines under proposed new animal welfare laws to be unveiled today.

The ACT Government is proposing a range of new animal welfare measures in draft legislation that Minister for City Services Chris Steel says is designed to help keep Canberra’s animals safe and appropriately cared for.

The Bill, out for consultation, would introduce 12 new offences to deal with duty of care and cruelty issues, including offences for failing to groom and maintain an animal, failure to provide an animal with water or shelter, and failure to provide a hygienic environment, and an offence of hitting or kicking an animal.

The dog walking limit is aimed to ensure better control of dogs and prevent people and other animals being attacked.

The bill will also include new offences around dog fighting and violent animal activities with provisions for ‘effective enforcement’.

Leaving an animal unattended in a car will attract fines up to $3,200, and allow a person to break into a car to save an animal where there are reasonable grounds to do so.

Mr Steel said the draft laws would enable the Government to prevent those who are cruel to animals from owning, caring for or living with animals, with new offences for minor duty of care or cruelty offences that include warnings and the ability to issue fines. Serious offence provisions have been retained, and the jail terms for the most severe offences will increase.

It will also be easier to ban offenders from owning animals with repeat offenders or those who have committed serious animal welfare offences and are likely to be a danger to other animals, able to be banned from owning, caring for or living with animals.

There is also a move to stamp out puppy farming with licensing of pet boarding establishments and pet shops, to ensure the highest standards of animal welfare.

“Assistance animals provide support for many Canberrans to participate and be included in our community. We want to provide certainty for people with an assistance animal that they can access any public premises with their assistance dog,” Mr Steel said.

“Our proposed laws will send a clear message, if you deny a person with an assistance animal access to public premises, you could be fined $4000 for an individual or $20,250 for a corporation.

“We know that Canberrans really value and care for the welfare animals in our community and our Government is moving to strengthen protections for the welfare of animals and our approach to animal cruelty,” Mr Steel said.

“All animals should have a good quality of life, and we want to strengthen our laws to ensure that all animals are respected and properly cared for in the ACT, in consultation with the community.”

The draft laws will recognise that animals are sentient beings that can feel emotion and pain and deserve to have an acceptable quality of life.

Consultation on the draft Animal Welfare legislation is open through www.yoursay.act.gov.au until 7 February 2019.

Some people can't even control one dog on a leash

Lesley Jane exactly right last Sunday a man in Monash had no control over his dog it entered my son's backyard and attacked there small dog and she has spent the week at the vets .Only came home today . Just worried it will do it again .Or attack some child .The owner of the dog hasnt even had the decency to check up on the dog it attacked .

So the lady who walks her 5 lovely sausage dogs at the lake can't walk them anymore? And what about dog walkers? Who exactly is this ridiculous law supposed to be targeting?

I just want a law that says if YOUR dog attacks me, I am allowed to kick YOU in the groin.

It would’ve been better if the headline had not highlighted the dog-walking law. It’s probably the one bad law in this proposed set.

All fantastic ideas...I just wish the penalties were higher.

Did you know that it is illegal in the ACT to leave your dog tethered in public? So you wouldn't be able to stop at the shops to quickly buy some milk on the way home with the dog because you can't leave them in the car (even when it's 5 degrees and the dog is in no danger) and you can't tie them up outside the shop. What if your toddler urgently needs to go to the loo while you're driving or your run out of petrol? Can't leave the dog in the car, can't leave them outside, even for a minute.

Do the people that make up these laws even have dogs that they treat as part of the family?

Canberra - Nanny state!! An embarrassment to the world. haha all those professional dog walkers in NY & Europe, UK etc etc would keel over laughing!

Agree, these ACT policy makers have no clue & NFI as owning a beloved family pet. Apalling. WE do know how to behave & what is

My dogs love going for drives so I regularly take them with when I have quick errands to run.

Lin Van Oevelen stop overreacting! Read the proposed legislation properly. You are not allowed to leave your dogs in dangerous situations. If it’s 5 degrees it is not dangerous. Bit of commonsense required I think.

I read the article which says "Leaving an animal unattended in a car will attract fines up to $3,200". I'll go read the proposal but if it doesn't match what this article says that's hardly my fault.

And my point about how ridiculous it is that it is illegal to tie your dog up at the shops still stands regardless.

Peter McDonald - 13 minutes ago
Ive never seen anyone or Heard of anyone getting booked. View
Peter McDonald - 14 minutes ago
Yasmin Clayton no their God will protect them😉 View
Michael Drew - 3 hours ago
This may be problematic from an insurance perspective especially if lifelong head injuries were sustained in an accident with... View
News 47

Better laws to protect pets and their owners from dog attacks