New panels go up at the War Memoral 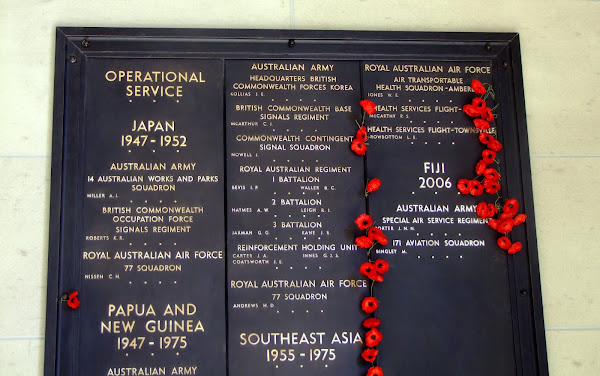 The War Memorial has announced the installation of new bronze panels bearing the names of the dead to add non-warlike operational fatalities:

A historic decision was made by the Council of the Memorial on 6 March 2013 to amend the criteria for the Roll of Honour to include Defence personnel who have died in non-warlike operations.

“In future, when the government of Australia declares an operation which is named by the Chief of Defence, and men and women of the Defence Forces are deployed, should anyone lose their life as a result of that operation, their name will be added to the Roll of Honour,” said Dr Nelson.

Before anyone huffs and puffs it’s worth remembering the Roll had already contained the names of some who died in training during the World Wars and the less we delve into the casualties of Alexandria’s brothels the happier we will all be. 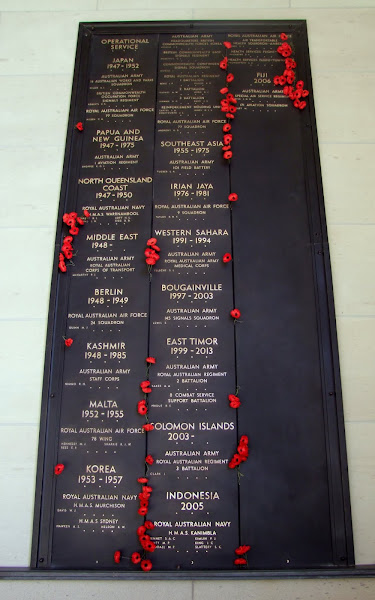 The brothels of Alexandria weren’t the only source of pleasure casualties. 🙂

My paternal grandfather spent nearly 2 years with 41 Bn on the Western front, and he picked up an MM for gallantry at the battle of Hamel in August 1918. He emerged without a scratch, although thousands of his mates were killed or wounded. When I eventually got his records out of the AWM a few years ago I discovered to my astonishment that his only war related “injury” was a dose of the clap that he picked up in Glasgow in early 1919 shortly before being demobbed.

He’d always been such a straight-arrow Baptist, so it made me smile. He was only 23 at the end of it, and I think any man could be forgiven for straying from the straight and narrow after the hell that he went through.

I agree with Thumper and applaud the decision by Council

About time I would suggest.

Tim Hough - 11 hours ago
That's some crazy conditions. I'd only find them borderline acceptable if we were guaranteed a Matildas match, but even then... View
Property 17

dandelion - 15 hours ago
I tried Framing Master in Fyshwick based on some comments here, but can't recommend them. They offer little in the way of cus... View
Business 2

Capital Retro - 15 hours ago
"The last three weeks showed clearance rates of 89 per cent, 80 per cent and 70 per cent respectively, with the number of pro... View
News 44

Rob Thomas - 15 hours ago
Gabriel an Australian politician? Oh he probably is. View
Russell Nankervis - 17 hours ago
Lol a Liberal saying others are killing democracy. How ironic. View
Charlie Church - 18 hours ago
Sheridan New honestly would trade it for anything right now. View
News 4

HiddenDragon - 15 hours ago
It's reassuring to know that people who have experience in administering electoral laws are skeptical about the workability o... View
russianafroman - 15 hours ago
Well said. I wouldn't describe it as worrying, rather irrational and destined to be either abused or completely ignored/circu... View
russianafroman - 16 hours ago
Unless we're talking about something grounded in science it will be very hard to confirm that something is false or not. Even... View
News 9

Acton - 18 hours ago
From the above the eligibility is stated as being a permanent resident of the ACT and not in paid employment for more than 20... View
Property 1

@The_RiotACT @The_RiotACT
The sight of black cockatoos always gladdens Ian Fraser's heart. The sight of the powerful birds munching their way through bark to reach their favourite grubs is remarkable, but did you know that two species visit Canberra? https://t.co/Df0XtWwK7n (1 hour ago)

@The_RiotACT @The_RiotACT
The Liberal and Labor candidates are neck and neck in Eden Monaro as the vote goes down to the wire and preferences run wild https://t.co/dG673PvvM6 (10 hours ago)