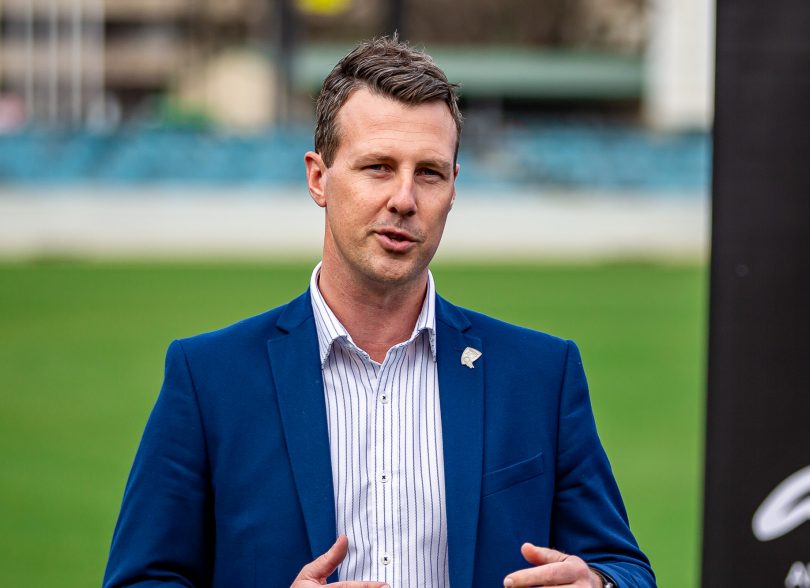 Cricket ACT CEO James Allsopp said there is more to be done to improve the ground. Photo: Region Media.

Cricket fans will be able to see instant replays at Manuka Oval from both ends of the ground during the upcoming summer of cricket, with replay screens to be temporarily installed.

It is not the only improvement the ground will receive before the venue sees its next sporting action, with a thousand seats to receive shade on the northern and southern ends of the ground thanks to a $2.7million investment from the ACT Government.

“During the test match last year, the cricket community were raving about how outstanding the ground was, including the new media centre, which has given a modern feel to the boutique ground,” Mr Allsopp said. “The fact that the ACT Government is further investing in the ground is fantastic for cricket.”

Mr Allsopp admitted there is one ‘final frontier’ that he would like to upgrade.

“We all know that some of the amenities on the eastern side of the ground could be improved,” he said. “Putting a big grandstand up there would be the ideal outcome but there is still a fair bit of work to get to that point.

“We are going in the right direction but I think that the eastern side is the final piece.” 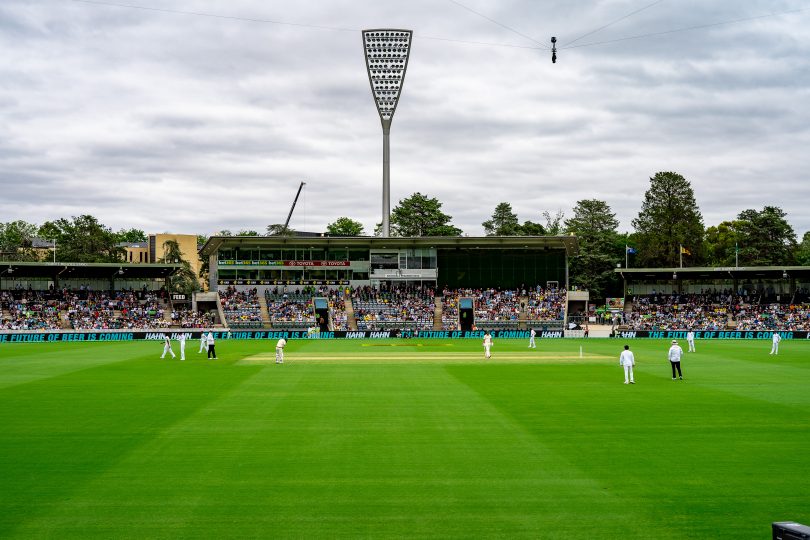 While all the hype last year was about Canberra’s first-ever test match, there is a strong T20 feeling to Canberra’s 2019-20 summer of cricket.

“From January onwards, this summer is all about the women with a tri-series between Australia, England and India – the three best countries in the world,” Mr Allsopp said. “Then we get the World Cup, where Canberra has an opportunity to watch a high level of cricket and be part of a World Cup.

“The ACT Government has been leading the way in support of women’s sport and we want to really put it on the map and to well-establish it within our society.”

The existing screen badly needs to be upgraded for AFL and AFLW, to at least 4 times the current size. Any plans on this?

The ACT government finds another way to waste more money.

Eric Anthony Lucas - 10 minutes ago
Susie Edmonds on the contrary, it makes sense not to spend a fortune on enquiring into something the IPCC has already covered... View
News 2

Bill Pappas - 50 minutes ago
Maybe they should introduce online study programs at the ANU? And do all Unis rely way too much ($$$) on overseas student and... View
News 40

chewy14 - 4 hours ago
Why would the federal government pay for a hard requirement that has been known since day 1 of planning and optioneering? The... View
News 24

Monica Tiffen - 13 hours ago
Should be interesting???? It will be a LOT harder to carry out!!!! View
Max Robinson - 14 hours ago
Jens Svensson what’s the difference? View
Jens Svensson - 15 hours ago
How do you plan to stop the bushfires, burning more coal ? View
Lifestyle 5

Mikey Moore - 17 hours ago
Veronika Sain gotta disagree with you. Besides the aforementioned reasons ensuring water quality would have also been a night... View
Stu Cook - 2 days ago
Veronika Sain of course it was Veronica. I note you didn’t acknowledge or engage with a single word that Mikey said, becaus... View
Veronika Sain - 2 days ago
It was a mistake to abandon it. And their prediction of consistent small water flows because there was a drought at that time... View
News 170

Brindie - 20 hours ago
Another example of developers pushing large, ugly apartment blocks. Despite the community views, the shoddy ACT government wi... View
Grant Stevens - 24 hours ago
In between the world's worst pollution levels,thanks to the bushfires View
Sport 3

noid - 2 days ago
Would love to move away from coal but when you look at our top 3 exports, see below, I would like to see some ideas on how we... View
HiddenDragon - 2 days ago
“You need to find a way to provide other opportunities to those communities as they transition out of those industries.”... View
show more show less
*Results are based on activity within last 7 days

As the ACT Government prepares for Stage 2 of light rail, fasten your seatbelts because it promises to be a...
News 29

Chief Minister Andrew Barr has criticised the terms of reference of the Bushfire Royal Commission for not giving a higher...
News 24

It's thirsty work being a dog with all of that walking and sniffing to do. So now Canberra's canines will...

@The_RiotACT @The_RiotACT
The #Brumbies have taken out their first win against the Chiefs in NZ since 2007, ending their torrid run across the ditch https://t.co/UqUb8oFgQh (47 minutes ago)

@The_RiotACT @The_RiotACT
It seems only fair that the Federal Government should help foot the higher bill for light rail when it is demanding that sections of it be wire-free to safeguard the heritage of the Parliamentary Triangle, says Ian Bushnell https://t.co/QaTeUxXiga (4 hours ago)