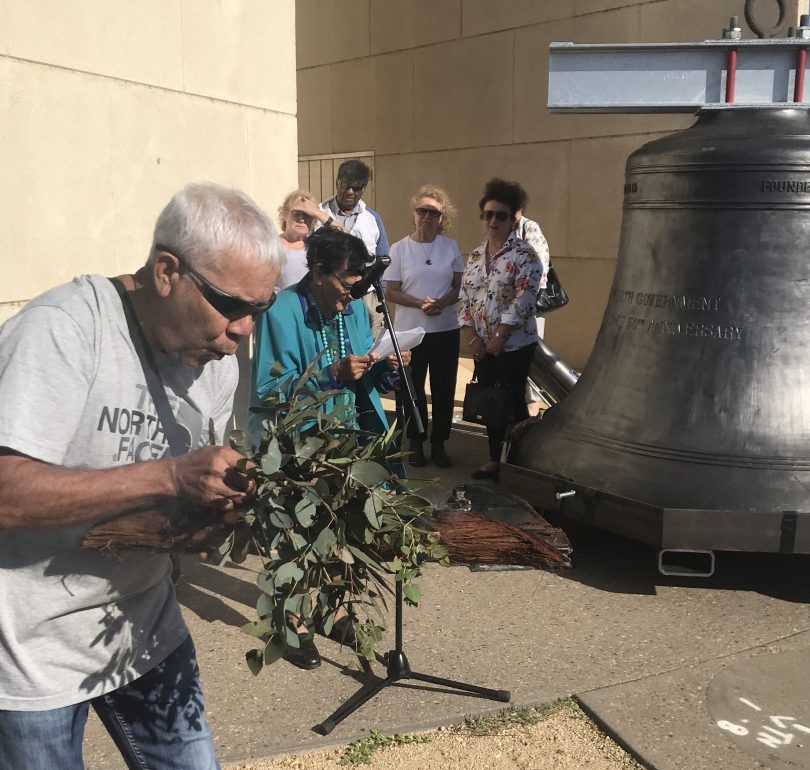 If you drove past an enormous bell on its way to the carillon on the back of a truck this week, you may not have realised you were seeing a piece of history in the making.

The Ngunnawal bell was greeted at Aspen Island with a smoking ceremony by Nugunnawal elders and a welcome to country by Aunty Agnes Shea. 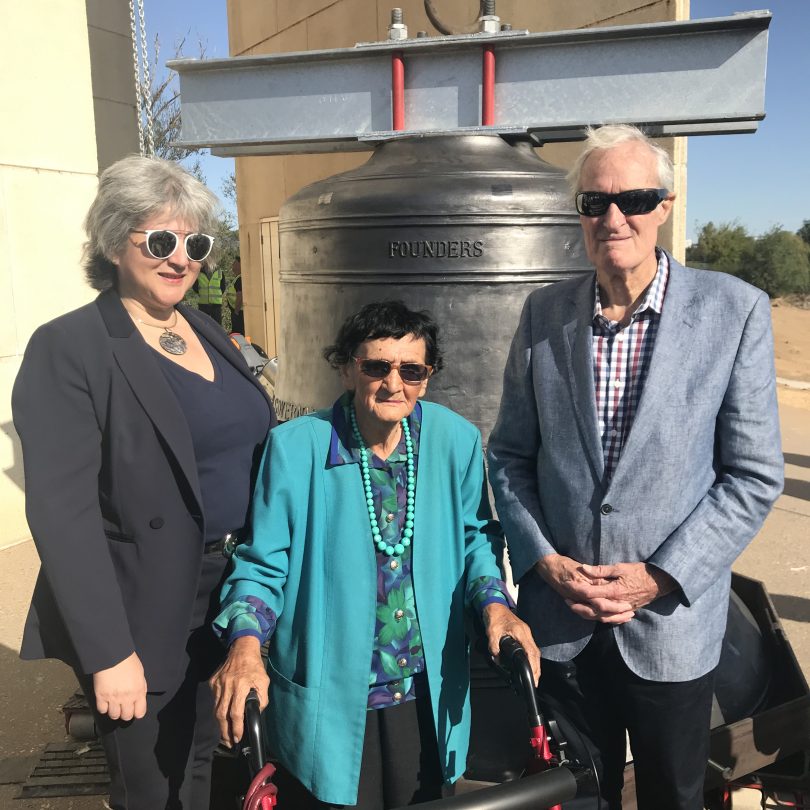 It’s part of an extensive renovation and refurbishment of the National Carillon, which was originally a gift from the British government to the people of Australia to commemorate the 50th anniversary of the national capital, and was officially opened by the Queen in 1970.

The carillon bells and mechanism were also originally designed and constructed by John Taylor & Co of Loughborough, the world’s largest working bell foundry.

Its 50th anniversary will be celebrated on April 26 and, in the meantime, the Carillon’s clavier is being stored at the ANU, where the carillonneurs – the official name for musicians who play the giant instrument – continue to practise.

NCA chair Terry Webster said that CEO Sally Barnes had sparked the original idea for the carillon addition. The five-tonne G bell was flown from England and transported from Canberra airport this morning before being lifted into the tower after the ceremony.

A pulley system raised the bell, which joins a full span of four and a half octaves on the instrument. A full carillon must have at least 47 bells.

British High Commissioner Vicki Treadall was present at the ceremony, as was Barrie Cameron, whose firm Cameron Chisholm Nicol designed the carillon, and members of the RAAF crew who flew the bell from the UK.

“The installation of the bell is an important milestone in the redevelopment and enhancement of the carillon,” Sally Barnes said. “On April 26, Aspen Island will look magnificent for its anniversary.”

But Ms Barnes said there was much more to the carillon than the bells themselves. She said the carillonneurs “are the ones who make the instrument hum” at recitals several times each week and during Heritage Week.

“Our interpretive guides conduct public tours to explain the carillon to visitors – people often think that the music is recorded,” she said.

Representatives from the ACT’s Reconciliation Council and national institutions were also present as Ngunnawal elders laid hands on the bell as eucalyptus smoke drifted across the island.

“This is a major milestone as the bell is lifted into place,” Sally Barnes said. “These things tell the story of Australia, the story of our nation.”

What happened to the fire ban?

What fire ban? That’s a pretty irrational observation as there hasn’t been a fire ban in the ACT since Monday (3-Feb)

During the total fire ban, we had a cleansing ceremony this week at NFSA instead.

Julie Mylchreest - 2 minutes ago
We already have a housing shortage. Keep penalising landlords, and watch that problem become significantly worse. Time the Te... View
Albert Jacka - 20 minutes ago
If you can’t PAY you can’t STAY View
Matt Jakab - 22 minutes ago
The author makes some sweeping generalisations about lessors, particularly around the claim that being a landlord is about be... View
Community 11

Perry Alopex - 5 minutes ago
Nice! I can only imagine that trying to settle in Canberra would be pretty rough. It's got one of the highest costs for livin... View
Peter Manna - 13 minutes ago
They will think this is paradise lol View
Amie Doolan - 49 minutes ago
Where have these 50 people been housed? Are there local families taking them in, are they living in hotels or have they been... View
News 48

Nazmul Hasan - 21 minutes ago
Very sad. Is there any alternatives of this approach?... View
Motoring 10

purplevh - 22 minutes ago
Still looks as sleek and low as grandpa's model T. The main problem with SUV's is their ability to block the view down the ro... View
News 5

Mike of Canberra - 44 minutes ago
John, I live in a street that is predominantly public/social housing and, frankly, it has been a blight on my life for many,... View
John Ryan - 3 hours ago
How do I join the Ainslie Residents' Assocation? I'm an Ainslie homeowner and I'm devastated at this outcome. It doesn't repr... View
John Ryan - 3 hours ago
My house is in Ainslie and I agree completely with HSewell. Disappointed that the so-called "Ainslie Residents' Association"... View
Property 32

Aaron Nicoli - 1 hour ago
It’s also so much safer now… 60km/h jam brakes on for the camera, accelerate back out to 60… It’s achieved nothing fo... View
Phil Hogan - 2 hours ago
Got to pay for the tram 🙄 View
News 3