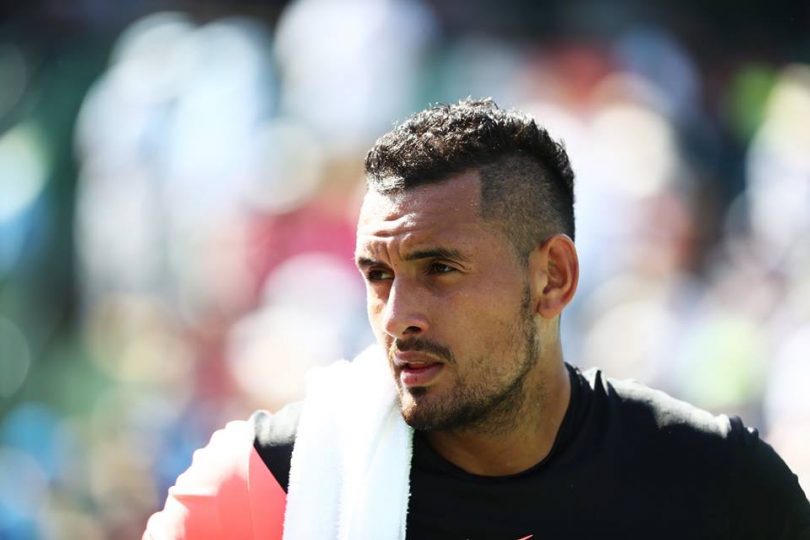 Nick Kyrgios has been slapped with a fine after TV cameras caught him imitating a lewd act with his water bottle during his semi-final loss at the Queen’s Club Championships over the weekend.

The Canberran, who is no stranger to controversy, was caught on camera performing an imitation of a lewd act during the change of ends in his 7-6, 7-6 loss to Marin Cilic.

Kyrgios’ semi-final run at the Wimbledon lead-up tournament was littered with on-court antics, with the broadcasters repeatedly apologising for his behaviour and bad language.

During his quarter-final win over Brit Kyle Edmund, the BBC was forced to apologise to viewers after Kyrgios’ repeated expletives were caught by courtside microphones.

The Canberra local was questioned about his colourful language, with the 23-year-old showing little regard for his behaviour, saying he “didn’t care”, the ABC reported.

Tennis Australia CEO Craig Tiley said on Melbourne radio today that he thinks Nick Kyrgios’ behaviour has improved despite his latest indiscretion. Tiley says these sorts of episodes are becoming less frequent, and the work Kyrgios is doing off the court should be commended. Do you agree?

Is Australia that desperate at wanting to win anything in tennis that they will put up with this imbeciles immature rantings. As he has shown he is underperformed, overrated and certainly overpaid for the quality of tennis that he plays🤔💩👎

And I’ve heard that he’s still young and we have to wait till he grows up. Sorry but a spoilt brat will never grow up.

Get rid of him. He is a disgrace to Australian sport. He is wasting space on facebook and has had too many chances.

They really need to stop letting this guy “represent Australia”. I do not care how well he can play tennis, he is not a sportsperson, nor a role model, nor someone who should be rewarded for bad behaviour.

This guy can play and challenge the top players but his attitude and manners are horrendous!

Letting the side down Nick .

Disgrace to Australia winning or losing. He will always be a loser in my mind .