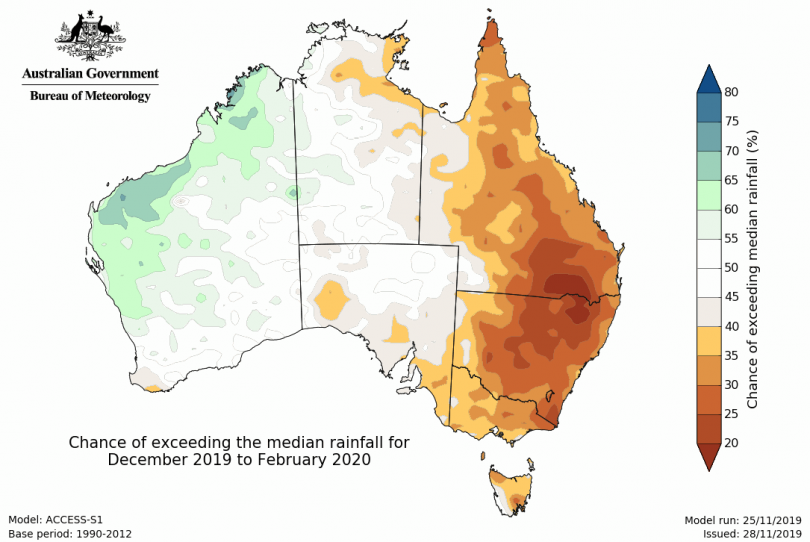 After one of the driest, dustiest and warmest springs on record, the ACT heads into summer with more of the same predicted and warnings from the weather bureau to be alert for heatwaves and bushfires.

The Bureau of Meteorology released its 2019/20 Summer Outlook and preliminary spring summary on Thursday, showing large parts of Australia, particularly in the south-east, are likely to see a continuation of the warmer and drier than average conditions experienced throughout spring.

The climate outlook shows a high likelihood of warmer than average days and nights for most of the country, while rainfall is likely to be below average for large parts of the nation’s east.

Head of long-range forecasts Dr Andrew Watkins said that for NSW and the ACT the odds were very high, above 80 per cent, that summer would be warmer and drier than normal, with hot, dry north-westerly winds persisting into January.

Dr Watkins said the key culprit was one of the strongest positive Indian Ocean Dipole (IOD) events on record.

“This brings cooler than normal temps off north-west Australia between Australia and Indonesia, but it also creates high pressures over the south-east of Australia, keeping the clouds and fronts away from NSW,” he said.

Dr Watkins said the positive IOD also meant an expected late start for the northern monsoon, one of the key drivers for tropical rainfall during the summer months.

“At this stage, we’re expecting the onset of the northern monsoon by mid-summer, which should see the odds for closer to average rainfall increasing from January and into February.”

Dr Watkins said the outlook was an important reminder for communities to be alert to the potential severe weather risks over the coming months.

“We’ve already seen significant bushfire activity during spring, and the outlook for drier and warmer than average conditions will maintain that heightened risk over the coming months,” he said.

“This outlook also means the risk of heatwaves is increased, so it’s important the community stays up to date with the latest information and advice from authorities and the Bureau’s heatwave forecasts and warnings.”

But he also said that even with a drier than average outlook, the threat of localised flooding from thunderstorms remained.

A blast of extreme heat in late November increased fire danger and broke spring temperature records in the south-east, with large fires, persistent smoke and dust storms features of the season.

Official spring summaries will be released on Monday.

Palindrome is a giveaway

The ACT government doesn’t see any problems otherwise we would have water restrictions.

And if they introduced restrictions you would be complaining about how useless and expensive the Cotter dam enlargement project was.

Simple fact there is enough storage in our dams that we don’t need restrictions at this time despite there being a drought.

HOW DARE YOU! JC, I have never criticised the Cotter Dam enlargement, although the huge cost overun was never explained.

Jose Vega so what caused the ice age,was that climate oriented?

Delma OShea well, yeah. Do you know what climate even is?

Nate Moore because they lived of the land and used resources that were available. I am assuming that you one of the greenies that has no idea, maybe tie yourself to a burning tree and then talk about climate change then you might realize what life is about

Delma OShea you talked about the ice age.. A climatic event. It's related to the climate. Read what you said.

Delma OShea You are kidding right😲? In case you aren't, it's 'no'.

tuggeranongist - 9 hours ago
All things being equal, I would prefer to deal with a large institutional landlord than an individual one. I suspect many oth... View
Redgum - 10 hours ago
Better Renting is correct on one point only. The decision to invest in a rental property is a business decision. Investments... View
Community 27

kenbehrens - 11 hours ago
Government charges contribute towards the high cost of rent in Canberra. It's Government policy to increase Rates, to a level... View
Geoffrey Bell - 13 hours ago
Mandy Truman $206 cheapest share place i could find. https://www.allhomes.com.au/share/search?region=canberra-act&district=gr... View
Mandy Truman - 13 hours ago
I'm full time uni and I got made redundant from my job and then got a casual job but haven't had work for 10 weeks. I would h... View
News 246