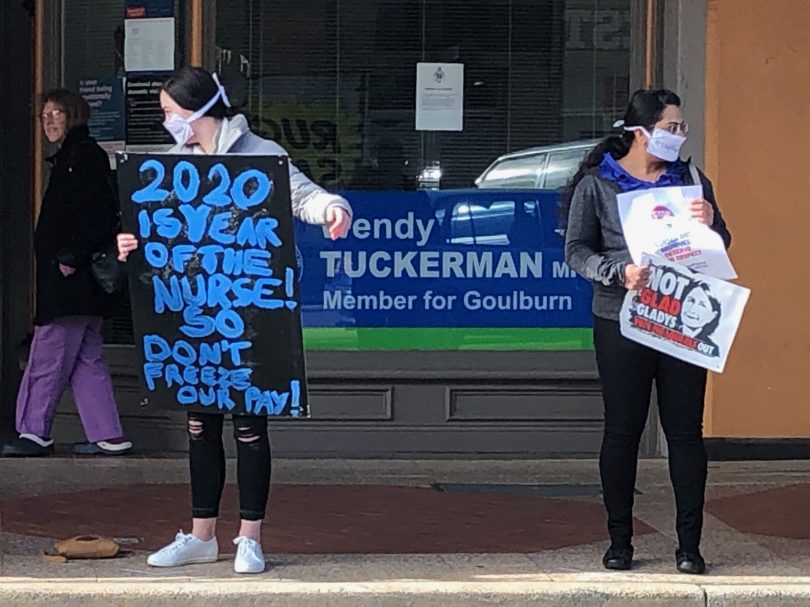 One Sunday afternoon in the waiting room at Goulburn Base Hospital’s emergency department a man answered the same three questions from his bewildered son. Where’s his girlfriend? Where’s his best mates? What just happened? For the umpteenth time, this harried father answered all three: she’s at the rugby match; his mates are playing; and he left the field at Wexted Oval severely concussed.

“You want to hold up a sign with each answer on it because he asks the same questions,” said the tall, smiling nurse in the triage room, dropping an enormous wave of relief over the father. “His memory will return. This is normal; he is going to be alright.”

More than anything else, her calm demeanour quelled his worst fears.

All of us have an episode in hospital to relate, whether personal or from accompanying a loved one. When the normality replaces the crisis, the hospital’s polished floors, antiseptic smells, weird meal times and briskly efficient nurses fade from our thoughts.

But we have almost daily reminders from NSW Premier Gladys Berejiklian, on morning television surrounded by senior public servants and her health minister basking in our gratitude for steering the state through the COVID-19 pandemic.

All the state premiers have made this crisis about themselves. Nurses are rarely mentioned at press conferences.

In the base hospital’s emergency department’s waiting room a window on reality opens abruptly. A mother admonishes her adult son in his boiler suit. He is groaning loudly, his hands rubbing his painful head with a blinding headache.

“Well, that’s what you get for working without a welding mask,” she says.

Nurses are on the job from 7.30 am, or from 2.30 pm for the second shift, or 9.30 pm for the third shift, to continue their non-stop work inserting cannulas, catheters, feeding an old man dying of pancreatic cancer, wiping stinking vomit from their shirt after reviving someone coming out of anaesthesia, or reassuring that apprentice welder.

The other reality is our nurses are angry. Many feel undervalued.

They have come through the bushfires and a pandemic and are hanging out for a small pay rise. They want 2.5 per cent. They have been offered a miserable 0.3 per cent.

“It’s a kick in the teeth,” one of their few advocates says. “We’re pissed off,” says another.

For some nurses, the rise represents an increase of just 7 cents per hour, or $2.90 per week. 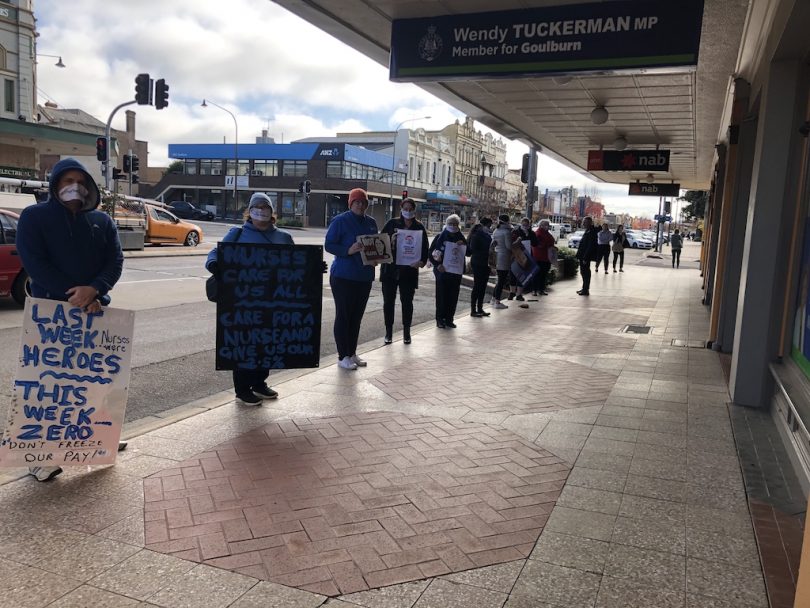 Nurses have been offered a pay rise of just 0.3 per cent. Photo: NSW Nurses Association.

Nurses’ years of training for diploma of nursing qualifications and postgraduate studies mean many high-needs patients, once treated in intensive care, are now in general wards. The workload has increased along with the transition.

In regional areas, where it’s harder to recruit, demands continue to rise. As one nurse in a NSW South Cost hospital observed: “I’m now doing more with less, for less.”

Goulburn District Unions president Anna Wurth points out the local economy falls behind when wages lag because of public servant numbers in the local workforce.

“Nurses, midwives, cleaners, teachers, prison guards and TAFE teachers are essential, and they live and spend in the local economy in Goulburn, creating more jobs,” she says.

“This is more than just nurses. The hospital relies on cleaners, pathologists, doctors, physios, social workers and many others. These are essential to keeping the hospital working and their pays are affected by these economically destructive decisions. This is about ideology, not about the community of Goulburn.”

Nurses’ attention to hygiene has became even more critical during the COVID-19 pandemic, yet their personal protective equipment is either missing or inadequate. Lack of empathy from decision-makers has riled them.

NSW Premier Gladys Berejiklian, in a moment of poor judgement, ignored self-isolation rules to traipse into the NSW Parliament’s lower house chamber while awaiting results of a COVID-19 test, safe in the knowledge that in the worst-case scenario, her care would be the best available.

The 2020 budget boasts of a strong economy, and a $3 billion spend on health. A dazzling array of statistics, infrastructure spending figures and spin on the government’s website shows it knows the price of everything.

And the value of nothing.

Someone who actually deserves a payrise.

Nurses should be paid so much more. Garbos think they have a tough job, swap for a day then ask for 12% over 3 years. Nurses should get what garbos do plus at least 15% over the next 3 years

Absolutely. They should get that just for having to work with doctors.

Bek Clark I dunno about that, but after a series of operations, nurses are my heroes - I couldn't do what they do daily (including putting up with .a patient like me !). I wld pay them whatever the nurses' union asks for.

It’s disgusting. We have the money that just on things like Corman to fly around the world I know that’s federal but the state is no better

Greg Myat - 2 minutes ago
Emma Myatt I would love to. View
Emma Myatt - 3 minutes ago
Greg Myat let’s go before it gets knocked down View
Michelle Kelly - 54 minutes ago
This is terrible. Why isn’t it heritage listed? View
News 16

Val Kuta - 30 minutes ago
Shiva Sapkota ✨ Property value✨ would be my guess View
Shiva Sapkota - 53 minutes ago
Plane noise in Jerra is not a new issue. So why it is a problem now. View
Joannah Leahy - 1 hour ago
All of Jerra is under the flight path. View
Public Sector 10

Jess Lucia - 51 minutes ago
Yup cause this looks so unprofessional… Jesus if I roll my eyes any harder I’ll have a stroke. View
Lily Rimanic - 57 minutes ago
Agreed, Joanne Mitchell ... I was curious as to the actual reasons cited in the submission to the FWC for their prohibition. View
Steve Jones - 1 hour ago
We pay their wages so why are they wasting our money. Get on with the job your are paid to do. View
Opinion 7

Brianna - 1 hour ago
Oh so true. The selfish actions of a few are greatly impacting the many. I am compromised, my husband is under going chemo. T... View
HiddenDragon - 3 hours ago
The re-purposing of the "we're all in this together" slogan for this pandemic is a perfect illustration of the saying that "i... View
Bernard Miller - 6 hours ago
At last a report that is well thought out, balanced and logical. It was a very pleasant read for a change, such a difference... View
Community 8

Mark Elvins - 3 hours ago
Interesting about being buried together. My great grandparents are buried together in the middle of the Binda cemetery becaus... View
Steph Jackman - 5 hours ago
Noel Carol Croker Family lineage? View
Community 10

HiddenDragon - 3 hours ago
In the afterglow of the Sydney Games, Roy and HG had an amusing conversation about future host "city" candidates, including Q... View
Capital Retro - 7 hours ago
The ACT hasn't even got enough money to pay all the facilitation payments involved. View
Sport 19

Peter John McBride - 4 hours ago
I can remember doing a sports award night with Phil Lynch. With me at 5' 3", standing next to Phil it was quite the sight. View
Breaking 14

Brisal - 5 hours ago
Save your opprobrium for the federal government, not the states. The feds are the ones that created the vaccine bottleneck wi... View
Public Sector 12

sneddo - 6 hours ago
I am appalled by the possibility of several hundred possibly infectious pollies & offsiders coming to the ACT for next week's... View
show more show less
*Results are based on activity within last 7 days

Stickers with QR codes that link users to non-COVID-related websites have been placed over some legitimate QR code check-ins in...
News 103

No train without the pain. The north had its share; now it's the south's turn. That's what Canberra drivers and...
News 103

@The_RiotACT @The_RiotACT
Sue Dobinson's family have been baking traditional Australian bakery food for more than 125 years and she's still operating a successful business in Canberra after more than 25 years https://t.co/KSGiCphPXN (1 hour ago)

@The_RiotACT @The_RiotACT
A longtime anti-noise campaigner says the new Jerrabomberra High School site is too close to Canberra Airport, meaning staff and students will be exposed to unacceptably high noise levels when not in properly insulated buildings https://t.co/H39wqwV6Jb (3 hours ago)